The pair addressed a crowd of car-honking supporters in Wilmington, Delaware on Saturday night 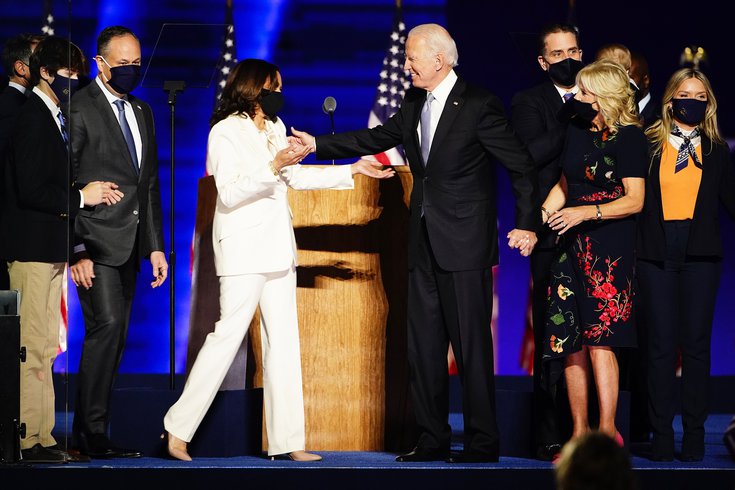 Joe Biden and Kamala Harris pledged to work for all Americans, not just for Democrats.

Following their win of the 2020 presidential election, President-elect Joe Biden and Vice President-elect Kamala Harris delivered a pair of victory speeches outside of the Chase Center in Wilmington, Delaware on Saturday night.

Addressing a crowd of supporters who were wearing face masks and honking their car horns in the age of COVID-19, the Democratic ticket called on the country to come together and unite.

"Let us be the nation we know we can be," Biden said at the campaign event less than an hour south of Philadelphia. "A nation united, a nation strengthened, a nation healed. There's never been anything we've tried we've not been able to do."

Biden also pledged to a president for all Americans, not just for Democrats.

"I pledge to be a president who seeks not to divide, but to unify. Who doesn't see red and blue states, but a United States," Biden said. "And who will work with all my heart to win the confidence of the whole people."

Like her running mate, Harris promised to work for the entire country as vice president.

"No matter who you voted for, I will strive to be the vice president that Joe was to President Obama," Harris said. "Loyal, honest, and prepared, waking up everyday thinking of you and your families. Because now is when the real work begins."

You can rewatch their full addresses here.

A new day in America has come. Tune in as Vice President-Elect @KamalaHarris and I address the nation. https://t.co/d38F58DHu8

The 77-year-old Biden now becomes the oldest-elected president and 46th commander-in-chief in American history. This was the former Vice President's third attempt at being elected to the White House.

The win makes history for Harris, who will become both the first woman and woman of color to be elected vice president. Harris has now achieved the highest level of elected office in the U.S. than any woman before her.

The now-outgoing Democratic senator from California shared a video of herself calling Biden to celebrate their win Saturday morning.

We did it, @JoeBiden. pic.twitter.com/oCgeylsjB4

Several media outlets, including the Associated Press, called the race in favor of Biden Saturday morning following a new batch of votes was released from Philadelphia. The votes secured a Pennsylvania win for Biden due to the number remaining electoral college votes needed to win the presidency.

The AP later called Nevada for Biden as well, giving him 290 electoral college votes compared to President Donald Trump's 214. The AP has also projected Arizona for Biden, but many other news organizations have not called the state.

Biden shared a statement to his campaign website after the AP called the election in his favor:

"I am honored and humbled by the trust the American people have placed in me and in Vice President-elect Harris. In the face of unprecedented obstacles, a record number of Americans voted. Proving once again, that democracy beats deep in the heart of America. With the campaign over, it's time to put the anger and the harsh rhetoric behind us and come together as a nation."

The election also made history as Biden broke the record for the highest number of votes ever cast for a presidential candidate, with 74,446,452 votes cast in his favor (50.5%) of the popular vote.

Previously, the record was set by former President Obama, when 69,498,516 votes were cast for him during the 2008 election. The Republican incumbent Trump also exceeded this record, with 70,294,341 votes cast in the President's favor (47.7%) of the popular vote.