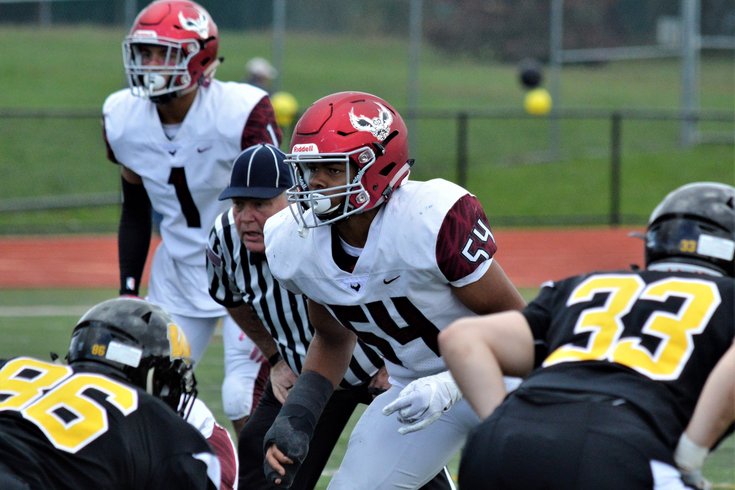 All Jeremiah Trotter Jr. was missing that Saturday night last December at Hersheypark Stadium was the carrot and the wisecracks.

While everyone else on the field in last season’s PIAA 6A state championship was playing at normal speed, Trotter, the 6-foot-1, 210-pound St. Joseph’s Prep linebacker, was playing with cartoon physics, seemingly everywhere. On the biggest stage of his young career, Trotter, the son of former Eagle great Jeremiah “Axeman” Trotter, had his biggest game, making 12 tackles, including two solos for minus-9 yards, in helping the Hawks to a 40-20 win over Harrisburg for the Prep’s fourth state crown in six years.

Jeremiah Jr. was arguably one of the best — if not the best — player on a field full of major Division I-level players.

That kind of game was always within his son, Trotter Sr. stresses, and it was just a matter of coming to the surface.

Now comes the hard part for “The Hatchet” — doing that every game this season.

The bar has been set high and Jeremiah Jr. has set it himself.

As a sophomore last year, Trotter played at about 70 percent. He played through pain in almost every game, battling a burst bursae sac in his knee, a stress fracture in his foot, a broken right thumb and a broken right pinky.

Every week he played with a cast that hampered his ability to use his hands.

He didn’t get close to 100 percent healthy until the end of the season, when he exploded in the state semifinals and the state championship game.

That’s the scary part — 2018 provided only a glimpse of Trotter Jr., who played essentially with one hand.

“It’s why I say I could have had a better season than I did,” said Jeremiah Jr., who turned 16 on Dec. 24 and has already received over 20 college scholarship offers after his sophomore year. “It was frustrating. I was still able to play. I looked at everything as it could have been worse. In the state championship, I was able to make plays because the coaches put me in the right position. Before games, I’ll admit it, I don’t get nervous. I like to stay calm. I know what I need to do. I don’t need any extra motivation to play hard.

“For me personally this year, I want to be able to play in every game and make every play I can. I don’t care about stats. I just want to win and make plays. It’s why I don’t go into the year making goals. I want to be the best. I feel different than last year. I played at around 190 pounds and now I’m over 200. But it was real important to me last year winning the state title, more so for the seniors, and having my dad come up to me, give me a hug and say how proud he was of me.

“My father being proud of me means a lot.”

Low-keyed, genial and humble, Jeremiah Jr. will be entering his junior year along with his younger brother, Josiah, a freshman linebacker for St. Joe’s who more resembles their father’s build.

This will be a challenging season for the Hawks, who are ranked No. 11 in the country by USA Today and carry a 13-game winning streak into a national-level schedule, which will include at least two nationally televised games. Led by “The Triplets,” Ohio State-bound junior quarterback Kyle McCord, junior Marvin Harrison Jr., the 6-foot-4 son of NFL Hall of Famer Marvin Harrison, and Jeremiah Jr., St. Joe’s Prep will face Marietta (GA), on August 30, Washington D.C. stalwart St. John’s at Rutgers University on September 6, and conclude their non-league schedule by hosting national powerhouse IMG Academy Friday, September 13, at Widener University’s Quick Stadium.

Trotter Sr. will no doubt be on the sidelines for all of them, maintaining a comfortable distance. He prefers the shadows. He doesn’t shove football down his son’s throat. It’s very important for Jeremiah and Tammi Trotter to let their kids be kids.

Last December, there was an NFL Films camera crew following Trotter Jr. and his family during state title weekend. Jeremiah Jr. held up well under that glare.

At home late last season, Jeremiah Sr. began focusing more on Josiah’s team than helping at The Prep. He made the conscious effort to take a step back from Jeremiah Jr. to see what he did.

The following game, Trotter Jr. caused two fumbles in the Hawks’ 42-14 victory over Bethlehem Freedom in the PIAA 6A state quarterfinals.

“I remember one of the coaches asking me if I said anything to Jeremiah, and I told them I didn’t say anything at all, if anything, I backed away,” Axeman remembered. “Jeremiah Jr. is just coming into his own right now. At some point, I won’t be coaching him and he’s going to be on his own. He played in a lot of pain, but he wouldn’t let anyone know. That’s just the way he is. The one thing I know about Jeremiah, he’s one of the toughest kids I’ve ever seen. If he tells you he’s hurting, you take it seriously, because it’s probably 10-times worse than what he’s telling you.

“I wasn’t surprised by the way Jeremiah played in the state championship. I’ve seen it before. I think it’s why I was a little emotional after that game, because I knew everything he went through to play. There was the NFL people. There’s the state championship. He had all of that coming at him and you wouldn’t know it. He could win the lottery and Jeremiah would act like he just picked up five bucks.

“He knows his name is ‘Jeremiah Trotter Jr.’ and he better get used to the attention. In his case, he’s already better than me. He’s getting used to it now. Everything Jeremiah’s received, he’s deserved. He’s the one doing the work. I can’t make any tackles for him. I want him to enjoy the ride."

After his junior year, the family will sit and narrow on five schools and then Jeremiah Jr. will make a choice.