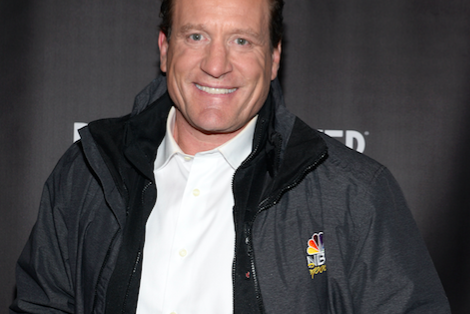 NBC Sports hockey analyst and former Philadelphia Flyers center Jeremy Roenick has been suspended by the network after making inappropriate comments during an appearance last week on a Barstool Sports podcast.

Roenick, who played in Philadelphia for three seasons between 2001-2005, joined Barstool's "Spittin' Chiclets" podcast last Thursday to talk about a range of topics, from the highlights of his 20-year career to his life as a member of the media.

At one point during the show, Roenick was asked about a trip he took to Portugal with his wife and his NBC colleague, Kathryn Tappen.

"I was the king of Portugal," Roenick said. "When you walk into every place and you have two blonde bombshells on each side ... your chest pops out a lot more."

Roenick recounted how he was approached at a pool by another woman who asked whether he was with both his wife and Tappen.

"I play it off like, you know, we're going to bed together every night, the three of us," Roenick said. "Now, if it really came to fruition that would really be good, but it's never going to happen."

Roenick also praised Tappen as "one of the most professional sports personalities that I know" and said she "wants people to respect her for her knowledge of sports, not just 'cause she's a pretty face."

Later in the podcast, Roenick also called colleague and former Flyers teammate Patrick Sharp "beautiful," adding that he would have to think twice if he had an opportunity to sleep with him.

The podcast has since been removed from the Barstool Sports website.

Roenick, who has been with NBC Sports Group since 2010, has been suspended indefinitely without pay.