The former 76er told the female reporter who pressed Barkley about his political views that 'I don't hit women, but if I did I would hit you.' 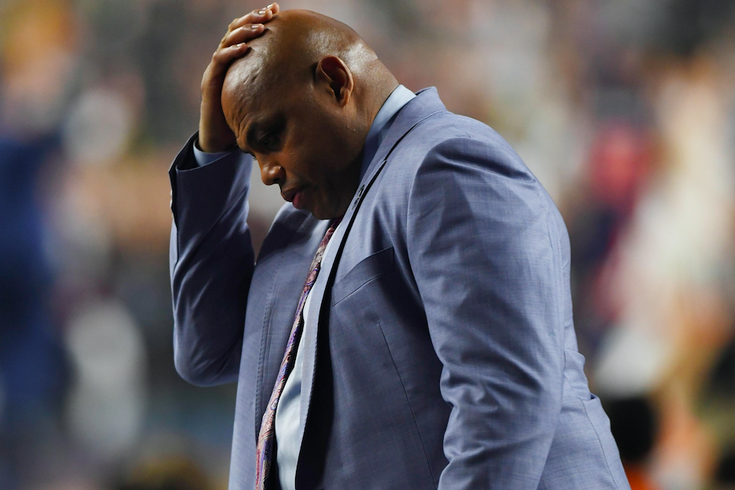 Charles Barkley has apologized for making a remark about violence against women in response to a question from Axios reporter Alexi McCammond. Barkley said the comment was intended as a joke, but was "unacceptable."

Former Philadelphia 76ers star and NBA analyst Charles Barkley has issued an apology for offensive comments he made to a reporter at an event on Tuesday night.

Barkley had been discussing the 2020 presidential election when he was surrounded by a group of reporters, including Alexi McCammond of Axios.

During the conversation, McCammond noted that Barkley had expressed support both for former Massachusetts Gov. Deval Patrick and South Bend Mayor Pete Buttigieg.

When McCammond pointed out that Barkley had shifted his support when a Buttigieg campaign member showed up, Barkley reportedly said, "I don't hit women, but if I did I would hit you."

Just FYI Charles Barkley told me tonight “I don’t hit women but if I did I would hit you,” and then when I objected to that he told me I “couldn’t take a joke.”

There are almost no times I will beak an OTR “agreement” but this is not OK. And it was all because he came in talking about how he loves Deval Patrick and once someone from Pete‘s campaign came around he said he loved Pete and I reminded him he previously said he was a Deval fan

Here’s a pic (albeit dark and blurry) if you need more. pic.twitter.com/Ad32cMemiv

Barkley, who's long been known to intentionally stir the pot, issued an apology via Turner Sports (he doesn't have any social media accounts of his own).

Statement on behalf of Charles Barkley in response to tweet by Axios reporter Alexi McCammond:

“My comment was inappropriate and unacceptable. It was an attempted joke that wasn’t funny at all. There’s no excuse for it and I apologize.”

Both Barkley and McCammond were hammered on Twitter for the unwholesome exchange, Barkley because of the tasteless joke and McCammond for making it public.

Man, seeing some of these people defending Barkley is wild. A gentleman, at no point would tell a complete stranger, no matter how famous he is, that he would out his hands on her as a "joke". Damn, and I thought my sense of humor was spotty. That's not a good look #Chuck

The threat of physical violence, especially from someone the size of Charles Barkley, isn’t a fucking joke. It’s never funny. https://t.co/Q9mSQlkYs2

Re: Charles Barkley...The world is changing. Things that were viewed as "harmless jokes" are not being viewed the same way anymore. Either you adapt or you find yourself in a PR catastrophe. I believe he meant no harm, but he caused harm, and should know better.

Guess what I’m not here for today: y’all’s cancel culture. Charles Barkley, apologize for your stupid joke. Alexi, if you felt threatened even for a millisecond, you wouldn’t be posting this on twitter for likes, you would’ve contacted the authorities instead.

Charles Barkley made a JOKE in a room full of people and this woman runs straight to Twitter to I guess "tell on him" or something. He didn't touch or harm that woman in any way but of course the outrage machine is hard at work rn.

I usually enjoy and agree with Charles Barkley, but he was dead wrong this time. A very bad "joke." https://t.co/xND0U3lSdI

I think it’s soft of Barkley to say what he said. Real men don’t joke about hitting women, that’s soft as hell

man, people on twitter constantly reveal themselves. It amazes me how people on here take no issue with the optics of a man, never mind Barkley, but a MAN hitting a woman joke or not. Jesus!

Last year at this time we were all celebrating Charles Barkley, the human, after Shirley Wang wrote that beautiful story about her father. Today we are trying to cancel him over a dumb joke. 2019, you need to lay off the drugs. You aren't taking Sir Charles.

Charles Barkley has said a lot of awful shit over the years and largely gotten away with it. That doesn't somehow justify or make his latest shitshow ok. And claiming its "just a joke" only exacerbates the problem.

Barkley, who was recently celebrated with a statue at the Sixers practice facility, has made comments in the past about violence toward women.

While playing with the Sixers in 1990, he once remarked after a win, "This is a game that if you lose, you go home and beat your wife and kids," according to the Los Angeles Times.

In that instance, the reporter asked Barkley if he wanted to reconsider his comments, but he reportedly said, "Nah, print it."

More recently, Barkley has been criticized for an extended gag on "NBA on TNT" in which he disparages the women of San Antonio for being overweight, despite his own well-publicized weight issues.

Among his fans, Barkley's charm is how he speaks his mind, which leads to occasional outbursts and incidents that cross the line — like spitting on a young fan. His brash personality has always been softened by his self-deprecation, which became a winning brand for him. If Charles Barkley isn't cracking jokes and being mildly offensive, he's not being Charles Barkley.

That's fine, but this incident should make clear to him that violence against women is a subject he should avoid for the sake of decency and humor.