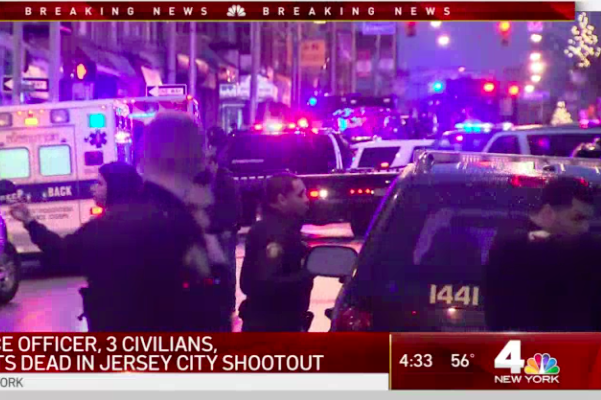 A police officer was fatally shot during an ambush in Jersey City on Dec. 10, 2019. Two other officers and a civilian were injured in the incident.

The incident unfolded in the vicinity of Martin Luther King Boulevard and Bayview Avenue, where the police officer, who was shot, approached two suspects as part of a homicide investigation, according to NBC News.

Two other police officers and a civilian also were shot during this initial encounter, but they were expected to survive. The two suspects fled the scene in a van and then took control of a local bodega, where they remained amid intermittent gunfire.

SWAT officers from Jersey City were joined by the FBI, ATF and New Jersey State Police at the scene.

By the time the standoff ended in the late afternoon, both suspects and three civilians inside the store were dead, officials said.

As a precaution, all schools in Jersey City were put on lockdown and area campuses were given the order to shelter in place.

Authorities told NBC4 that at least one suspect was holed up in the bodega with a long gun.

The police officer who was killed was not identified as of late Tuesday afternoon. He was reportedly a married father of five.

I have been briefed on the unfolding situation in Jersey City. Our thoughts and prayers are with the men and women of the Jersey City Police Department, especially with the officers shot during this standoff, and with the residents and schoolchildren currently under lockdown.

The New York Times is providing frequent updates as this situation in Jersey City develops. Also, watch below for video coverage of the shootings.