While the statue has been unveiled, the fundraising effort by the historical society continues... 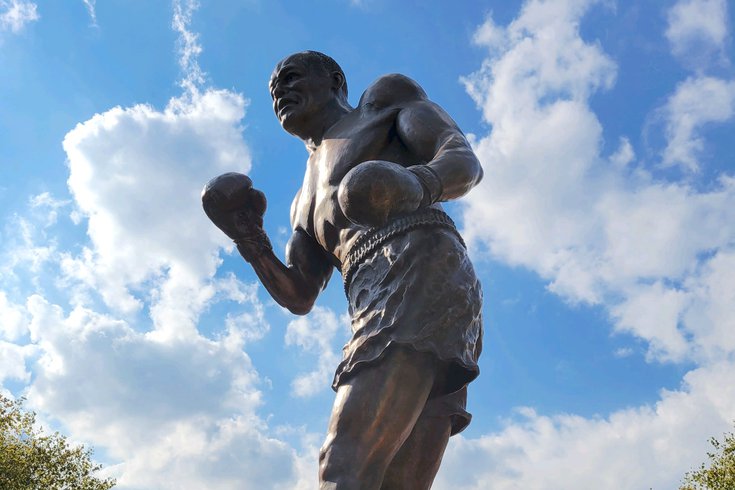 The Jersey Joe Walcott statue that was unveiled last month in Camden.

Stare at it long enough and any moment you would swear the 8-foot bronze statue of Jersey Joe Walcott standing there on the Camden waterfront is about to step off its pedestal and start throwing punches again.

That it’s even up is a miracle that was a decade in the making.

On Saturday, October 16, Camden County Historical Society, along with the county’s Board of Commissioners, made sure the legacy remained of one of the more under-appreciated all-time great heavyweight champions, by unveiling the statue of the Camden County native.

It’s the first boxing statue of its kind in South Jersey, one of an everyman who would have been extremely humbled by such an honor. What started as an impossible mission turned into a successful task merging various people, from various walks of life to make it possible.

It was an exhaustive measure of persistence, much like Walcott himself.

Walcott, whose real name was Arnold Cream, died at the age of 80 on Feb. 25, 1994 and was inducted into the International Boxing Hall of Fame in 1990. He fought for 23 years, amassing a 49-20-1 (31 KOs) record and was the epitome of perseverance. He won the heavyweight championship—finally on his fifth try, in 1951—though many boxing historians feel his chance in the sun should have come four years earlier.

Many believed Walcott won, but the judges declared Louis the winner in a 15-round decision. Four years later, at age 37, Walcott became the oldest man at that time to win a heavyweight championship fight, defeating Ezzard Charles. His record stood until 1994 when George Foreman won the title at age 45.

The birth of the statue project came when Vincent Cream, Walcott’s grandson, and his brother Bill, attended the 2012 unveiling ceremony of the 22-foot tall, two-ton statue of all-time great Rocky Marciano in his hometown of Brockton, Massachusetts.

“We saw what they were able to do on behalf of their champion and I thought we could do that for my grandfather,” Vincent said. “They got great backing by the World Boxing Council (WBC). I told my brother that I have to go on a mission to make sure grandpop is honored, and we could do it on the Camden waterfront. I wanted my grandfather’s story to be reborn.

“That’s where it began. I shook a lot of hands, and I reached out to a lot of people. I had to work on my elevator pitch. It was a monumental task, and in the beginning, I got lot of, ‘Good luck with that, it’s a great idea.’ But nothing more. We needed a leader to galvanize people.”

George Norcross III, 65, an insurance executive and Chairman of the Camden-based Cooper University Health Care, lived a block away from Walcott in Pennsauken, New Jersey. Norcross would see Walcott walking around the neighborhood and was first introduced to the champ by his father, George Norcross Jr., when he was around seven or eight.

When Norcross III saw a brochure about the project, he immediately got in touch with Vincent and jumped on board.

“Jersey Joe was legendary in our community and throughout South Jersey, and I have pictures of my dad and my brothers and I with Jersey Joe when I was very young,” Norcross III recalled. “Riletta Cream was Joe’s wife who went on to become the Camden High principal and who I became very close to and supported. She supported the county government for many years and we were very close until her passing.

“Jersey Joe was a legendary figure in South Jersey. I would say he was the most famous person to ever come out of Camden (County). I will say he may have been the most famous person to come out of South Jersey. He was probably the most popular person in public office in the history of Camden County, because of who Joe was. I mean he wasn’t liked—Joe was loved.”

It was a massive undertaking. The Camden County Historical Society raised $185,000 to fund the project, with the help of Norcross III, Vincent Cream and Camden County government.

"It was beyond the ring for Jersey Joe... [He] was a true superhero in our community and in our area. He deserved to be honored and his story deserves to be told." — Camden Mayor Vic Carstarphen

The project was 10 years in the works, and it took sculptor Carl LeVotch 18 months to put the amazing piece of art together. LeVotch consulted with the Cream family and asked them how they would like to remember the former champ. They wanted to see Walcott after he knocked Louis down for the first time in their first fight.

Each step of the way, from commissioning LeVotch, who’s the sculptor of Boxing Writers Association of America’s annual awards, Cream, Norcross III and various local figures were present.

“People embraced the idea, and I went out with [Camden Mayor] Vic Carstarphen, before he was mayor of Camden, and we out there and saw the sculpture and I was mesmerized by it,” Norcross III said.

“Carl LeVotch did an incredible job and the statue is a reflection of who Jersey Joe was,” said Carstarphen, the former Temple basketball star. “Sometimes history gets lost, and sometimes you have to know the past to understand the present. I literally lived around the Cream family, so I know the stories.

“It was beyond the ring for Jersey Joe. He was the first African-American to serve as sheriff in Camden County. Jersey Joe was a true superhero in our community and in our area. He deserved to be honored and his story deserves to be told. And I know George doesn’t want to take any credit for it, but this wouldn’t have happened without George.

“This was something dear to Vincent and his family, and George made sure that traction got picked up. When I saw the statue, it was incredible to see the energy from the many different people there. It was a great day, weather-wise, and people didn’t want to leave. It’s one of those days you want to bottle up and hold. Coach (John) Chaney always said you show by your deeds, and Jersey Joe represented that.”

Norcross immediately thought about his father, George Jr., at the unveiling. It brought back a flood of memories.

In the coming months, lights will be set up around the Walcott statue, so Norcross and the city of Camden can still see the statue of a man who defined determination.

More funds need to be raised and fundraising continues by the society. For more information on supporting the statute and the historical society can be found here.