A guide to the Jersey Shore's best dive bars

Some of these watering holes are nicer than others, but they all have that special charm that keeps regulars coming back for more 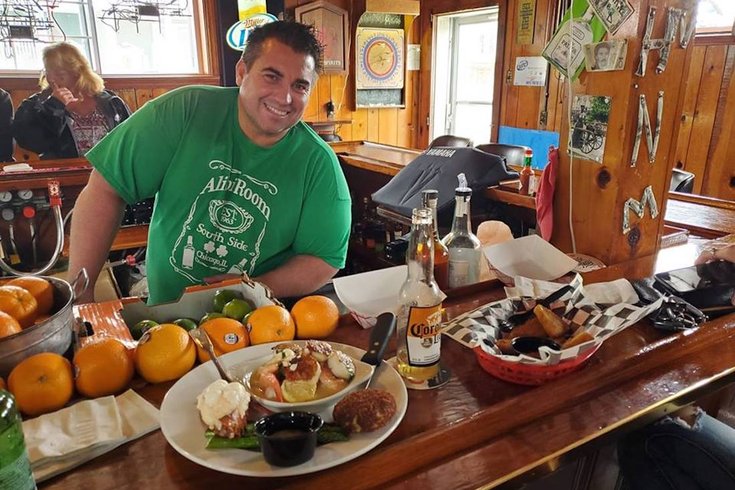 Billy Scott stands behind the bar at West Wildwood's Westside Saloon, an off-the-beaten-path dive bar at the Jersey Shore with a bunch of dollar bills hanging from the ceiling courtesy of its customers.

The term “dive bar” is a loaded one, with some watering-hole owners feeling as if it’s a dismissive slight while others embrace it as a boastful source of pride.

To each their own business approach. As a customer, I’ve always found the closer to dive bar – and further away from high-end, fancy glass, business-suit dog-and-pony show – a place is, the more comfortable I am.

So it came as no surprise when an editor here at PhillyVoice International Headquarters recently dropped a line asking, “How well do you know shore dive bars? Could you do a sort-of-last-call roundup before the summer ends?”

The answers were “quite well” and “sure, no problem.” This, because during my years as a Sea Isle City local working in Atlantic City, I was of a mentality – and salary – that helped establish a baseline knowledge of the Jersey Shore’s dive-bar intricacies.

My circuit included a trio of bars that would likely rebuff a “dive bar” label, but the coziness of The Irish Pub in Atlantic City and – pre-renovations – Kixx McNutley’s in Sea Isle and the Princeton in Avalon made those places feel like home, especially during the off-season.

Though I haven’t returned to the Princeton since it underwent a big-money revamp (I want to remember it as it was, not what it became when rich people turned Avalon into something I don’t really recognize anymore), I still highly recommend all three of the aforementioned watering holes.

As for the rest of this post, it will be a collection of bars – be they divey or as close as shore bars can come to that these days – for those who’d like to knock a few back in a place that’s comfortably without pretense.

No, I haven’t been to all of those listed below, so included in these blurbs will be recommendations from those who have.

There are two dozen in all (with a bunch in one resort town lumped together into one collective entry). 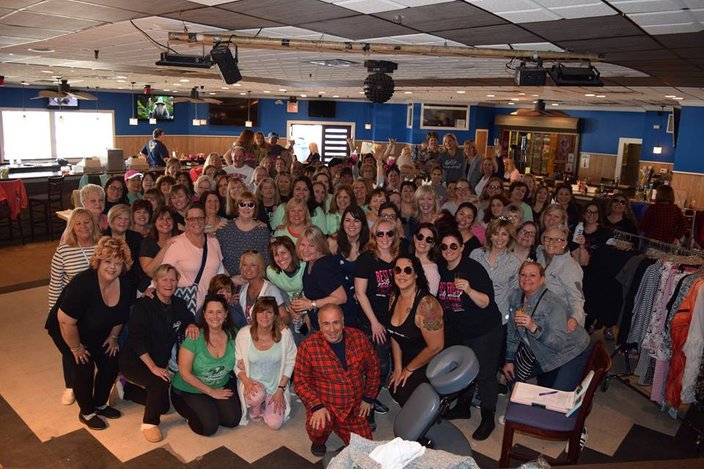 In April, there was a pajama party at Kixx McNutley's bar in Sea Isle, which tends to get packed in the summers and serve as a locals' retreat in the off-season. That guy in the front of the photo in red jammies? None other than Sea Isle City Mayor Lenny Desiderio, who owns the establishment.

Think we missed any? Well, drop a line via email (subject line: Hickey, you missed an awesome Jersey Shore Dive Bar) or leave it in the comments section.

Chelsea Pub and Inn (8 South Morris Avenue, Atlantic City) Located in the shadows of the Tropicana, the drinks are cheap and the clientele loaded with locals. Also, there are pool tables!

Charlie’s Bar (800 Shore Road, Somers Point) It’s not really fair to call this locals’ haven a dive bar in the traditional sense of the term. “At the Shore since ’44” on the mainland not far from the Ninth Street Bridge into Ocean City, it’s family friendly, has a long shuffleboard table along one side of the bar and has what can only be termed as “sweet Lord Jesus, these are great” wings.

DiOrio's Circle Cafe (10 MacArthur Boulevard, Somers Point) People will get mad at me for amplifying the glory of a bar that offers 54-cent clams on Thursday nights. That's fine. I'd be mad too if I were a local who frequents DiOrio's. However, I am beholden to share this information because the spot's chill vibe.

Maynard’s Café (9306 Amherst Avenue, Margate) This “festive hangout for comfort eats and beer” is right across the street from bayside docks. It’s been there since the fifties and one oldhead fondly recalls “growing up with dollar Moosehead Wednesday’s to sneaky good wings. It always delivers.”

Robert’s Place (7807 Atlantic Avenue, Margate) Fell in love with this spot to the point of buying a T-shirt. It has a quintessentially locals feel, but welcoming in a way unlike at gems hidden from shoobie invasion. Really good food but the presentation – “clams casino on cafeteria trays” – eschews any sense of pretense.

St. George’s Pub (4282 Harbor Beach Boulevard, Brigantine) Got mixed reviews of this, essentially the only dive bar located in a strip mall on the barrier island just north of Atlantic City. In the pro column, from a shoobie: “They don’t close, awesome bartenders and have a great jukebox.” In the con column, from a local: “I won’t go there. Service blows. So horrible.” Hey, dive bars ain’t for everybody; one man's trash, another's treasure. Give it a try and decide for yourself.

Tony’s Baltimore Grill (2800 Atlantic Avenue, Atlantic City) This place is an Atlantic City institution. Located kitty corner from ACPD's headquarters, it serves late-night pizzas into the wee hours and has reasonable priced cocktails and a throwback vibe that a poker player with whom I stopped by a couple times describes as “it feels like you stepped back in time when you walk through the door.” There’s a bar in one room, and a sizable dining area in the other. Well worth a visit.

C-View Inn (1380 Washington Street, Cape May) Cape May isn’t the sort of place with which you’d associate noteworthy dive bars. In fact, per a local, “If we call the CVIEW a dive bar, they get offended, but tourists shy away unless they trust the person who told them to go. Roughest bathrooms in Cape May.” Sounds like a pretty awesome dive bar to me.

Firehouse Tavern (3116 Park Boulevard, Wildwood) A locals hangout with a feel like “Cheers,” Firehouse enthusiasts boast of cheap drinks, shuffleboard, great food, “wall to wall characters, mostly the good kind” and a location that renders one – should they choose to do so – to be able to stumble home.

Fred’s Tavern (314 96th Street, Stone Harbor) I mean, we’re talking about Stone Harbor, the sort of place with the sort of people that would likely recoil with a “dive bar” being amongst them. Still, this place on the main drag is a classic shore spot, a must-stop mainstay.

Mouse Trap Lounge Bar and Grill (2051 Dennisville-Peterburg Road, Woodbine) Part of a 12-lane bowling alley on the mainland off of Sea Isle City, this place gets you away from the traditional shore vibe and into the world of the offshore locals. Says one of those locals in describing how this is a dive bar of note, “it’s pretty s***** and has a bar.” We’re sold!

No. 1 Tavern/Super Tully Nut (100 Atlantic Avenue, North Wildwood) Want to get drunk quickly? Might as well stop by this place which – having opened in 1969 – has a signature drink called the Super Tully Nut. The recipe is a trade secret. Some say it’s great, and some say it’s horrible. Doesn’t really matter since those who know the Jersey Shore inside and out, and the criteria which makes a bar a dive bar, say this place may be the best example in the region.

Ship N Shore (434 W. Montgomery Avenue, Wildwood) Located smack dab in the middle of a residential block, this dive bar is near the water and features a crowd that’s more local than visitor. Never been there, but next time I’m down in Wildwood, it’s a must stop.

Sea Isle City’s bar district (the area near Landis Avenue and JFK Boulevard) I’ve already expressed my fondness for Kixx McNutley’s (which is safely more than a dozen blocks away from this collective madness) and the yet-mentioned VFW Post 1963.

In this little pocket of town, you have the Ocean Drive (aka The OD and its ‘no shower happy hour’), La Costa Lounge (where, back in the day, I saw customers just smash bottles on the ground because they could without fear of getting flagged), and the Springfield Inn (which fended off stories of its impending demise). You want to go to these places? Fine. That’s your prerogative. Good for you. I’ll be the grown-up in the room and leave them in my distant past.

Surf Dog Bar & Grill (1563 Dehirsh Avenue, Woodbine) Located seven-and-a-half miles from the heart of Sea Isle City’s dive-bar district, this isn’t so much one of those as a locals spot featuring an outdoor “beach” bar, patio area (with fire pit!) and a menu featuring, among other things, Redneck Tacos, an American Gravy Burger and Foot Long Surf Dogs (including Chili Cheese, Carolina Slaw and Cow Pig variations).

Twistie’s Tavern on the Bay (236 Bayview Drive, Strathmere) Way back in the day, this spot would only open its doors a few weeks of the year so as to retain its liquor license. (Legend holds that it was a speakeasy during Prohibition and Al Capone stopped by for a spell.) Word would spread whisper-down-the-lane style amongst locals who’d cruise into sleepy little Strathmere to have a rollicking good time after strolling down a driveway and into a barroom that’s since gotten spruced up and remains open for more than those couple weeks a year. It’s not really a dive bar anymore, but it sure was for a good long while, and much respect to the owners who seek to preserve “the rich history of this popular bayside retreat.”

Westside Saloon (770 West Glenwood Avenue, West Wildwood) Tucked away on a back island not too far from Drum Creek and Mud Creek Point, this place is best known for a game in which patrons are invited to concoct a badminton-esque shuttlecock out of a dollar bill wrapped around a quarter and thumbtack and try to stick it into the bar’s ceiling. That sounds totally like something that drunk people should be doing. Loves it. Much respect. Also, try the orange crush.

The Ark Pub & Eatery (401 Sea Avenue, Point Pleasant Beach). Here’s how they describe themselves: “We’re a laid back Pub at the Jersey Shore that serves locally caught fish, locally grown fruits and vegetables and locally brewed beer whenever possible.” Part of the locals’ ethos is looking out for one another. This place at the northern edge of the county gets it.

Donovan’s Reef (1171 Ocean Avneue, Sea Bright) During tourist season, this “chill hangout” is a beachfront draw for visitors. So why is it in this list? Because one local vouched for the newly rebuilt establishment's chillness in the offseason. 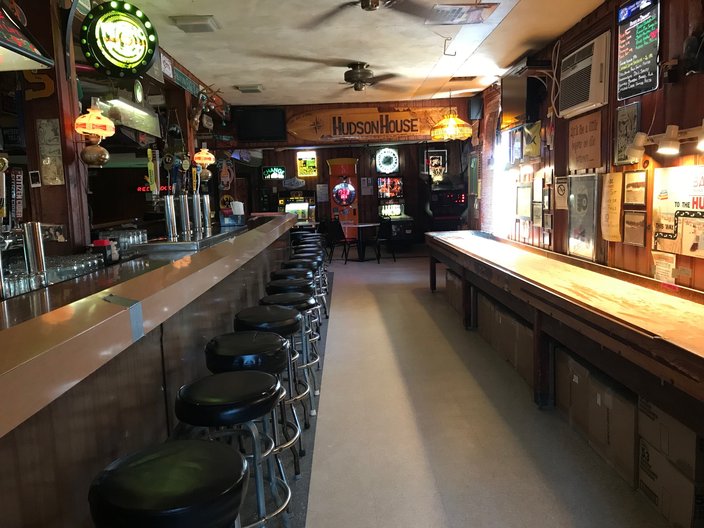 Things were calm inside the Hudson House Bar in Beach Haven, New Jersey before the doors opened to customers on Thursday, August 8, 2019. The 13th Street establishment is widely lauded as one of the Jersey Shore's best dive bars.

From one: “Stuck in the middle of a residential street, it hasn't changed a bit in years. Friendly staff. Cheap drinks. Lotsa old photos. Shuffleboard! Great jukebox.”

From another: “It’s gotta be ‘The HUD’ in Beach Haven. It’s small and intimate, everyone sings along to the jukebox (mostly The Boss) and there’s a few bar games sprinkled around for entertainment. The drinks are cheap and, somehow, everyone is the best drunk versions of themselves.”