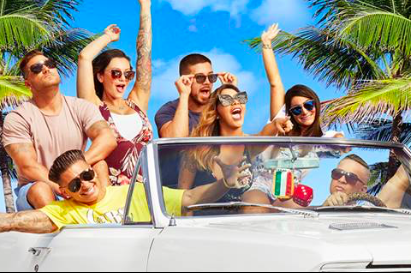 The specter of MTV's "Jersey Shore" cast returning to film in the area is back again — this time in Mays Landing.

Added to the agenda for Monday evening's meeting of the Hamilton Township Council – of which Mays Landing is a part – was a resolution of "no objection" to the revamped MTV series, "Jersey Shore: Family Vacation," filming in the Atlantic County community.

The series, a collaboration between MTV and 495 Productions, will be entering its fourth season after previously filming in Seaside Heights, Atlantic City, Manalapin and Las Vegas.

Monday night's meeting resulted in the Township Council tabling the production company's proposal, according to the Press of Atlantic City.

495 Productions reportedly sent a letter seeking support to film on private property at an Airbnb in Mays Landing. The proposal, which surrounds a "staycation" episode of the series, included dates to complete filming in August.

The show's plans created a controversy last summer when speculation arose that the show's second season would be filming in Wildwood.

At the time, Wildwood Mayor Ernie Troiano said the series had never been granted a permit to film in Wildwood, though there had been a conversation about it several months prior.

The Greater Wildwoods Tourism Improvement and Development Authority came out in opposition to the show's filming there, echoing similar concerns raised in Seaside Heights about the desire to remain a family-friendly destination.