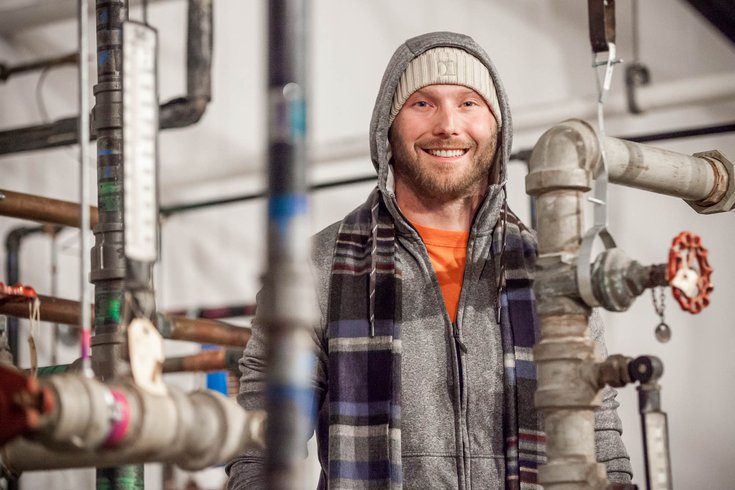 Jesse Krimes is not a two-dimensional kind of guy. And he wants you to know it.

Krimes is a 33-year-old Lancaster native who was federally indicted in February 2009 on drug charges. He served a four-year sentence, tossed between prisons in Dauphin, Lancaster and Perry counties until he was released in 2013. Years previously, he served a separate 18-month sentence, also for drug charges.

By those facts alone, his bet is that most will have already made up their minds about who he is. And that, he wants you to know, just isn't fair -- for him, or any other offender.

"I'm trying to create critical viewers, and complicate these very simplified narratives people have in their minds of what it means to be an offender," Krimes told PhillyVoice.

After a year's worth of preparation, Krimes unveiled today a series of site-specific installations, on display at the Leonard Pearlstein Gallery at 3401 Filbert St. through March 18. Much of that work, poetically, complicates the narratives of otherwise simple objects, ranging from tires to pipes to a ladder. They're pieces he discovered in his day-to-day life that spoke to him and were transformed according to his philosophical beliefs.

Up to this point, Krimes has been best known for work he's made while in prison, creating portraits of offenders by taking newspaper clippings and adhering them to playing cards with soap. Those pieces were eventually showcased at Palais de Tokyo in Paris.

His new collection, the first he's showcased that have been made outside of prison, builds on themes of perception, vis a vis prison stigmas. Krimes cited one work, a lobster cage held up by a ladder and filled out with a painting hung from a beam, as an example of how viewpoint changes the meaning of his work and unveils a deeper meaning.

"With that piece, I wanted to add another element that would complicate the two-dimensional plane with the three-dimensional plane, so I brought the colors of the painting out onto the surface of the ladder and lobster trap, but only from a singular perspective," Krimes said. "Then I figured, ‘Why is this interesting?’ And it goes back to some of my experiences in prison and how people will view someone who committed a crime as a criminal -- this singular perspective without viewing this person in their entirety." 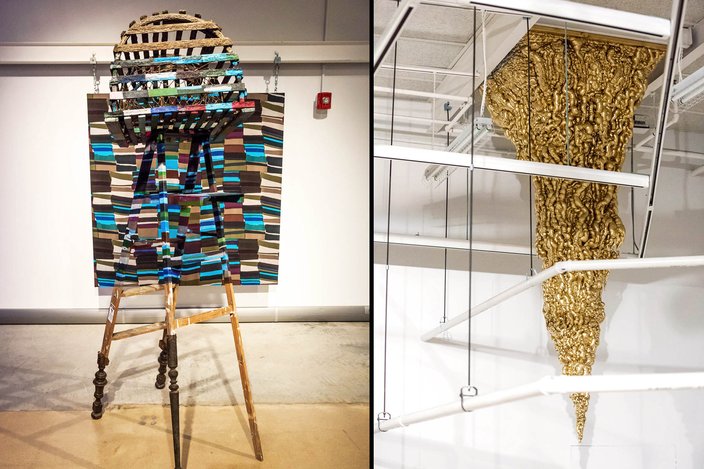 So, step off to the side and view the piece from there, and the piece's shape changes -- it's less cohesive, and colors don't coordinate in the same way. Or, he noted, it may look different to anyone who can't see it from his height.

"It visually breaks and intersects depending on perspective and disorients the viewer’s experience," he explained. "And if you’re not my exact height, at my eye level, colors won’t line up. So I can tell you colors correspond from this perspective, but you may never be able to see that perspective.

"But it doesn’t make it untrue just because someone can’t see it.” 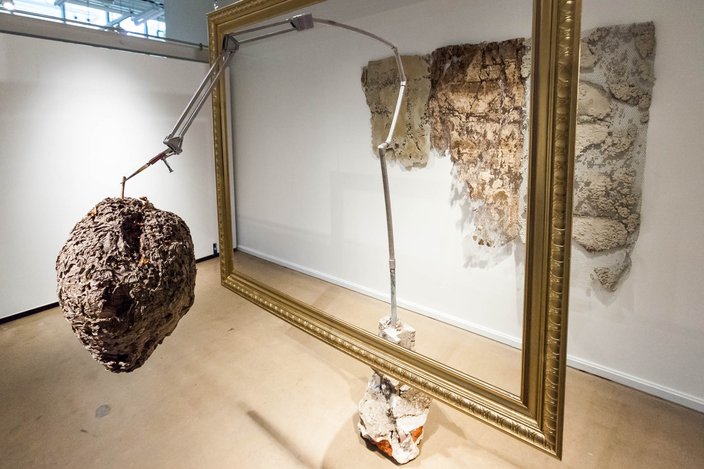 Krimes' untitled, beehive installation, with mesh material hanging in the background. Krimes designed his pieces with presentation in mind, noting that the frame hangs from a wire rather than on a wall.

In other works, Krimes explores themes of glorification, derived from his studies of Michael Foucault's "Discipline and Punish" and Giorgio Agamben's "The Kingdom and the Glory." Art galleries, he said, function with their own system of containment, where everyday objects are suddenly made the focus of attention, only with feelings of glory, not vilification. It's why he opted to use items -- containers -- like a beehive and a lobster trap in other pieces in the gallery.

“The gallery system is a way of containing art objects – it’s like an art-industrial complex," Krimes said. "There’s a whole world built around these processes of displaying artwork, except there’s a whole value and glorification that happens with making artwork that doesn’t happen with confining people in prison. It's not allowing people to see, versus allowing people to see, and much of what we see and experience is selective.

"We walk by a lot of these things every day, but often don’t pay attention to them until you contain them.”

Large slabs of rubber from sprint car tires hang on meat hooks on the back wall of Krimes' exhibit. The tires were taken from his parents' machine works shop in Lancaster. Krimes noted the rubber took on a new life upon unfurling it from its wheel shape.

The point, then, is twofold: to encourage people to stop and consider what role these everyday objects play in their lives, and to evaluate how true their assumptions of them -- or of offenders -- actually are.

“I want people’s perspectives to be altered, walking away. I want this to be a thought-provoking exhibition that not only uses the aesthetics and art objects as valuable objects but to be something that will connect on a much deeper level of how we view things typically seen to not have much value," Krimes said. "To shift perspective, to get people to slow down and become more engaged viewers, and be people who experience the world rather than rushing through it every day.”