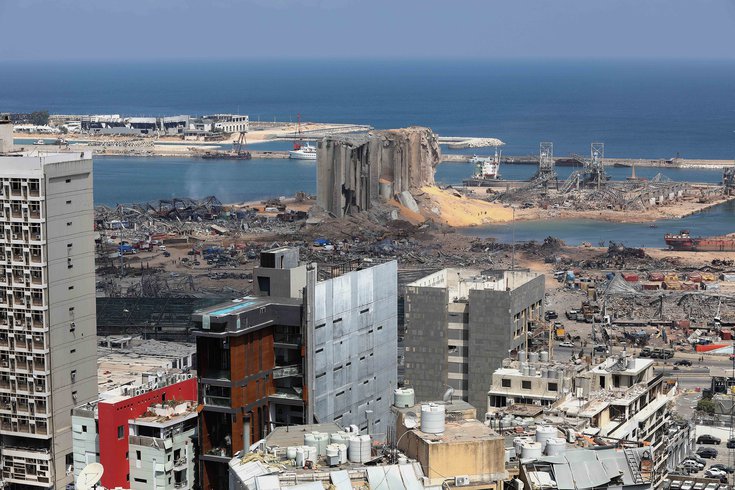 Jet Wine Bar is raising money for the victims of massive explosions on Tuesday, Aug. 4, 2020, that killed more than 100 people in Beirut, Lebanon. The fundraiser takes place from Friday, Aug 7, to Thursday, Aug. 13. The photo above shows the Port of Beirut after blasts.

Center City's Jet Wine Bar is raising money to help the victims of the massive explosions in Beirut, Lebanon, earlier this week.

The bar at 1525 South St. is hosting "Beirut Benefit Week" from Friday, Aug. 7 to Thursday, Aug. 13. During that time, Jet Wine Bar will be serving five wines from Lebanon's Bekaa Valley, each available by the glass, the bottle or to-go, and spirits and cocktails made with West Bank Arak, an anise flavor liquor.

When customers who purchase these wines and cocktails, 20% of the sales will benefit The Lebanese Red Cross, which is assisting the survivors of the Beirut explosions on Tuesday. The blasts killed at least 135 people and injured at least 4,000 people, along with destroying most of the city's port and damaging many surrounding buildings.

The disaster was fueled by 2,750 tons of ammonium nitrate stored in a warehouse at the port, but what ignited the volatile chemical is still being investigated. The blast caused destruction in a six mile radius and shockwaves could be felt more than 100 miles away.

❗️FUNDRAISING ALERT❗️From Friday 8/7 to Thursday 8/13, We will be offering 5 different wines made in Bekaa Valley, Lebanon by the glass/bottle/to-go, as well as spirits and cocktails made from West Bank Arak. 20% of those sales will be donated to a fund through @couventrouge to benefit the Lebanese Red Cross. Check out our event on Facebook for more info: https://www.facebook.com/events/1248896568801061/?notif_t=event_calendar_create¬if_id=1596729582887712

Owner of Jet Wine Bar Jill Weber worked in neighboring Syria for more than a decade. She spoke out on the devastation in Lebanon this week.

"Lebanon has often served as refuge for the displaced, despite the country’s own strife and challenges, and now they clearly need our help," said Weber.

Money collected by Jet Wine Bar will be donated to a fund started by Lebanese Winery Couvent Rouge, which will in turn provide them to the Lebanese Red Cross. The winery sells products made by Syrian refugees as does Dar Richi, another winery whose wines will be available at the South Street wine bar.

Additionally, the bar is collecting cash donations for Beirut. Information about how to donate directly can be found at the wine bar's Facebook page.

Jet Wine Bar is open for outdoor seating in their wine garden every day. Find their hours here.