The school 'pulled a Kanye' on Peter Butera, the host joked on his late night show 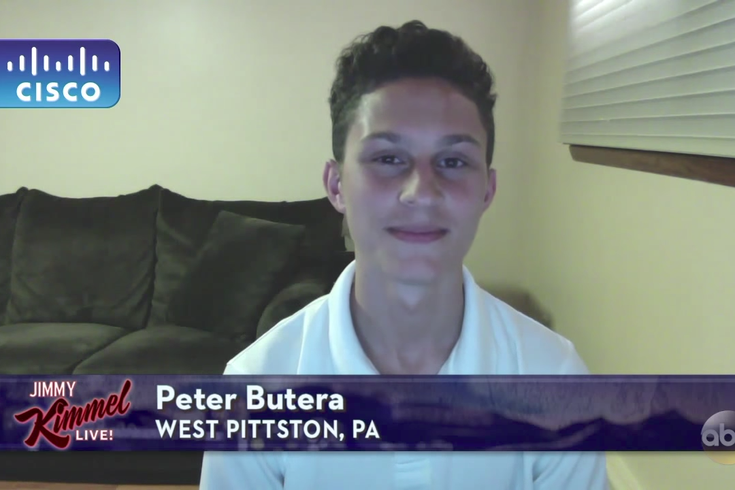 Peter Butera, 18, was brought onto "Jimmy Kimmel Live!" to finish a graduation speech that was silenced by his high school.

The high school senior whose graduation speech was cut short by school officials has gotten the final say.

Peter Butera, the valedictorian and class president at Wyoming Area High School in Exeter, Pennsylvania, made an appearance via the web on Tuesday's "Jimmy Kimmel Live!" Comedian and talk show host Jimmy Kimmel invited him on to finish his speech, which nervous administrators cut off by killing his microphone when Butera went off script.

Butera, who also was class president, was silenced shortly after he began to criticize the school and the "authoritative attitude" of some of the teachers.

Classmates reacted by shouting, "Let him speak," but the 18-year-old bound for Villanova University in Radnor, Delaware County, exited the stage shortly after.

“The young man submitted his graduation speech to his principal and delivered a speech different from the speech that was submitted,” Janet Serino, the school's superintendent, told The Washington Post.

Butera appearance on ABC's "Jimmy Kimmel Live!" allowed him to deliver the address to a much larger audience.

Butera said he hasn't faced any consequences from the school and that his parents are proud of him for going rogue.

"All you really did was give the school like a two-star Yelp review, you really didn't do anything bad," the host told Butera before allowing him to finish the speech.

"Keep being a pain in the a--," Kimmel encouraged. "I will," Butera replied.

Watch the full segment below: