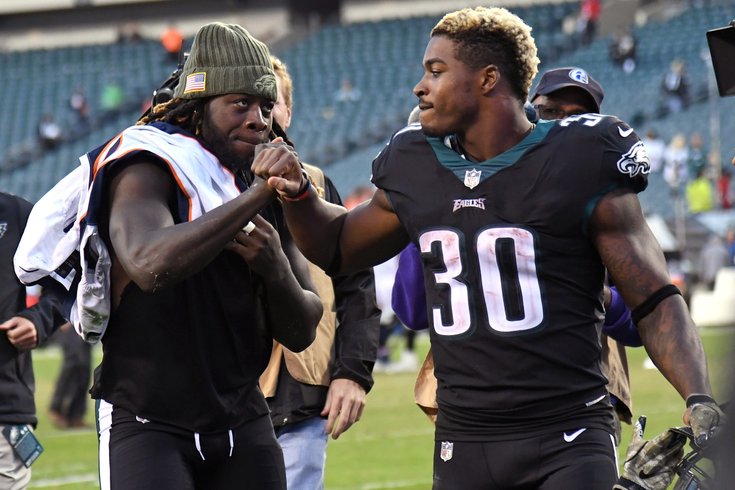 Philadelphia Eagles running back Jay Ajayi (36) and running back Corey Clement (30) walk off the field after win against the Denver Broncos at Lincoln Financial Field.

The two Eagles appeared on Kimmel's show to celebrate their victory over the New England Patriots, and they certainly appeared to be enjoying themselves. They came out on stage and gave Kimmel's sidekick, Guillermo Rodriguez, a celebratory Gatorade bath.

They weren't shy about what they accomplished, either. Clement brushed off the notion that his incredible touchdown catch wasn't actually a catch, and Ajayi took a parting shot at Tom Brady for muffing an easy catch, noting that his own quarterback was able to secure a touchdown reception with the "Philly Special" play.

But the highlight of the interview comes toward the end when Kimmel asks the players what they think about Super Bowl MVP quarterback Nick Foles being traded about an hour earlier.

Clement and Ajayi look at each other, dumbfounded, before Kimmel lets them know he just made that up.

The interview is worth a watch, and you can view it below.