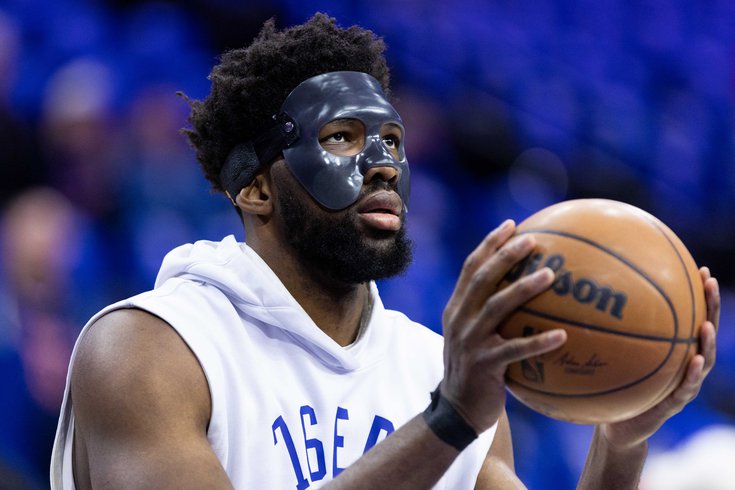 Joel Embiid warms up at shootaround.

MIAMI — The Sixers had their first opportunity to address the results of the MVP race on Tuesday, hours before tip-off of a pivotal Game 5 in Miami. And upon hearing the news that Denver Nuggets big man Nikola Jokic had beat out all other contenders for the league's top honor, head coach Doc Rivers was the most forceful of the critics.

"I don't know if a guy could have done more than he did this year, played without the second-best player all year," Rivers said. "Listen, his resume was great, and not taking anything away from Jokic either because he's a hell of a player. I do think this whole analytics-driven society, world is out of control at times. Some of the measures they use, like watch the damn game and decide is what I've always said. But at the end of the day, if Joel had won, which I thought he should have, there would have been criticism that way, if Giannis [Antetokounmpo] had won. Only one guy can win it, unfortunately."

There is a level of straw-manning going on here, though it is coming from the right place as Rivers attempts to protect and advocate for his guy. Jokic's case is certainly strong using advanced metrics — by some measures, he had the greatest offensive season of all-time this year — but as we've discussed in this space in the past, his regular-old production speaks for itself. Seriously, we are talking about a guy who effectively averaged 27-14-8 while shooting 58 percent from the field. Those numbers are borderline impossible.

We have seen in the playoffs, though, part of why some people distrust the metrics and see a gap between a player like Embiid and someone like Jokic. The latter put up video game numbers in Denver's first-round exit at the hands of the Warriors, but he had noticeable issues defending in space late in games during that series, and Jokic was even pulled out late in Game 4 to get a better defensive group on the floor. By comparison, Embiid's return to their series against the Heat resulted in a pronounced shift on the defensive end, the big man offering tremendous value even as an orbital fracture and damaged thumb have dented his effectiveness. There were a couple of metrics that proclaimed Jokic as not just better than Embiid on defense, but better than almost all players in the league, which is an absurd premise on its face.

Rivers has not been the only guy to stick up for Embiid in the awards races, and outcry has not been limited to members of the organization. When the news leaked on Monday morning, a number of current and former athletes weighed in on Embiid getting robbed, ranging from Stephen Jackson to Kendrick Perkins to Natasha Cloud.

It's a little bit easier for those people to focus on a debate that is ultimately meaningless to what's most important for Philadelphia right now: competing for a championship. Everything else comes second at the moment — Tyrese Maxey joked at shootaround on Tuesday that he couldn't go see the new "Doctor Strange" movie yet because of the commitment level the playoffs demands, not to mention that his free time at home is being spent with his dog and his family.

The general feeling from the group is that Embiid deserved the award, they are a bit bummed he couldn't get there, but that it ultimately doesn't change the year he's had or his value to their program.

"I feel for him because he worked extremely hard this year. He was available as much as possible, a lot," Maxey said Tuesday. "He went through the COVID situation, some little injuries, but he played. a lot of games, I think the most games he's played his whole career. I feel for him, but at heart, in my heart he's our MVP. And I think lot of guys in the NBA have said the same thing. But hats off to Joker, he's been great as well."

The trophy would have been validation for Embiid's ridiculous season, but losing out on the award doesn't make it any less ridiculous. Joel Embiid became the first center to win the scoring title at the center position since Shaquille O'Neal did it in 2000, and the fourth center to do so since 1980. The other two seasons came during Michael Jordan's two-year sabbatical in the mid-90s, two firm asterisk seasons interrupting a run of 10 straight scoring titles for His Airness. Embiid counting Shaquille O'Neal and David Robinson as company feels like a fitting achievement for one of the game's most dominant players.

The story of this season also won't fade from view, especially if the Sixers manage to keep winning games and move deeper into the playoffs. At different points throughout this season, Embiid has had to be their best player and their public spokesman, with the latter job carrying as much (if not more) responsibility with how adversely his actions could impact trade talks.

Doing that in today's environment, with offenses better than ever and with several all-time greats competing for the honor, is something special. Embiid was also forced to do things he would not have otherwise had to do because of the Simmons-sized hole in the roster, running the transition attack and embracing more of a playmaking role to fill the void.

And here's the most important part — those sacrifices and adaptations have ultimately made Embiid a better, more dangerous player for a playoff run, where he can leave a more lasting impression to boost his legacy than he ever could with regular-season hardware. Embiid has stressed the importance of winning above all else even as he was in the process of stumping for the award, and if anything, the Sixers believe they might have a tailwind behind them now, the snub motivating Embiid to take it up yet another level.

"I was obviously disappointed, clearly Jokic is a great player too, Giannis, those three guys and [Devin] Booker I guess was in there as well," Doc Rivers said Tuesday. "I was surprised though, I actually thought Joel would win. But let's win it, and then everything else will follow I guess."

"I mean, obviously congratulations to the Joker. But obviously I think you know, Joel deserved it," Georges Niang added. "But like I've said before, now you guys get to see a pissed-off Joel. So, you're welcome."