Who won the week in Philly sports: Joel Embiid returns to the court and dominates

'The Phantom of the Process' returned to haunt the Heat 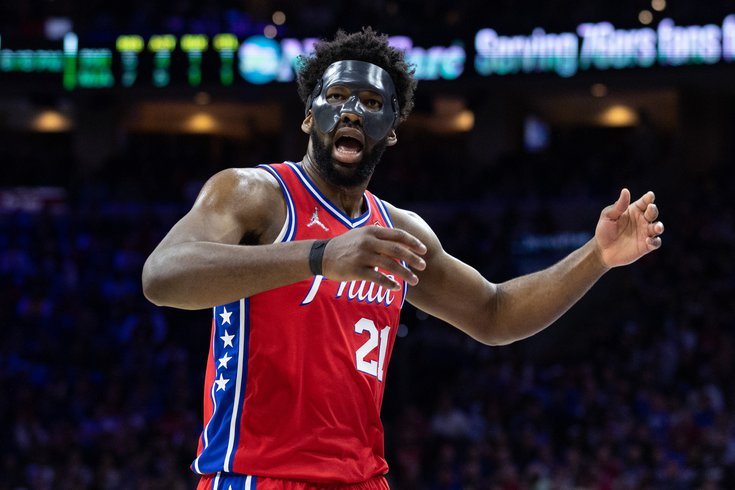 This past week was the tale of two teams for the Sixers.

It was the worst of times when they went down to Miami sans their 7-foot Cameroonian center and dropped the two opening games of the Eastern Conference Semifinals against the Heat. It was the best of times when they returned to Philly and pulled off two convincing wins with their MVP-level big man once again manning the paint.

Joel Embiid might not be bringing home the regular season MVP award, but he can reach loftier goals, such as winning Finals MVP and parading down Broad Street like a Philadelphia basketball messiah.

As for who won the week in Philly sports, it was once again an easy decision this Monday: the Sixers will go as far as Embiid will take them, and if he's playing this way, it might be further than any Sixers team has gone in over two decades.

My qualifications for Embiid are as follows:

The Center of Attention 🌎

What worked so well for the Heat in the first two games of this series was Bam Adebayo's defense. Given his versatility, Adebayo is one of the best defensive players in the league and I believe he has a legitimate case for Defensive Player of the Year this season. With an Embiid-sized hole in the Sixers' lineup in Games 1 and 2, Adebayo could do whatever he wanted defensively, rotating between the paint and perimeter, playing zone or playing man and being the key cog in the Heat's successful machine.

When a guy like Embiid, a bruising big man who coulda/woulda/shoulda won MVP, returns to the floor, everything changes for the opponents. That's even more true for Adebayo. Embiid occupied the Miami All-Star center's attention for the entirety of Games 3 and 4. His reactionary and help defense was minimized given the demands it takes to even attempt to guard Embiid. It's no surprise that the Sixers' perimeter attack was infinitely better in Games 3 and 4 because of that.

Defensive Presence is a Present 🎁

A three-time All-Defensive Team selection, Embiid's defense has sort of become underrated in a way over the last year or two because of his otherworldly offensive production. Sure, he takes some possessions off from time to time in the regular season, but when it counts, Embiid's just as good as he's been since he first suited up for the Sixers. Akin to the way him simply playing changes an opponent's defensive approach, the same happens on the other end of the court.

With Embiid out there, there's no longer a decrepit DeAndre Jordan nor an overeager Paul Reed protecting the rim. Embiid shifts the gravity of opposing offenses, deterring them from the paint simply by standing down there:

Embiid doesn't do too much on defense here, but still shuts down the possession.

Steps up on Strus off the DHO, then stops Tucker's roll. Heat reset to Butler, so Embiid helps cut off the baseline for a drive then closes out on PJ. Having Joel's energy and mobility back is huge. pic.twitter.com/fyJZDMWs5g

Fear the superhero in the mask, Miami. Well, maybe he's a villain to Heat fans in their half-filled arena, but that's part of the fun that comes with watching a vibrant, Herculean player like Embiid.

Fighting Through It All 💪

As Dinosaur Jr. once said, "I feel the pain of everyone."
The thumb injury Embiid sustained in the Game 3 win over the Raptors last round is overlooked at this point. It's a ligament tear that will require offseason surgery. More noticeably, Embiid missed the first two games of this series because of a concussion and broken orbital bone that was sustained late in Game 6 in Toronto when Pascal Siakam elbowed him in the face.
He's now donning his famous mask previously used, coincidentally enough, during the Sixers' playoff matchup with the Heat back in 2018.
For a guy whose thumb is falling off and has a broken bone in his face, it doesn't look at all like it affected Embiid's play against Miami. He had a pretty good outing in Game 3, putting up 18 points and 11 rebounds. Those might not be mind-blowing numbers, but again, performing like that given the severity of these injuries piling up and the way he changes opponents' offensive and defensive schemes flipped this series. Embiid was even better in Game 4, going for 24 and 11 and bringing the heat (😉) on D.

I'm certainly not alone in giving Embiid props. James Harden, the man whose three-point outbreak rocked the Wells Fargo Center on Sunday night, knows it all comes down to the big fella. Check out the following exchange from a story by PhillyVoice Sixers beat writer Kyle Neubeck:

The way he sees it, that fact and Philadelphia's change in fortune isn't hard to figure, and he laughed at a question pondering what allowed them to have confidence as a group down 2-0. All he had to do was look to the giant Cameroonian sitting to his right.
"That was the key, he's the MVP of the league," Harden said. "Credit to our guys, we had the right mindset going into both games, it's just difficult without Jo to win if you don't make shots...we still had that confidence gong into Game 3 knowing we could beat these guys, and obviously bringing Joel back was the X-factor."

Joel Embiid: the alpha and omega of the Sixers.

Harden would've been totally deserving of this prestigious honor this week, but I leaned toward JoJo on this one. The reason that president of basketball operations Daryl Morey wanted to bring Harden to Philly so badly is for performances like the one he had in Game 4.
Harden has struggled to be the historically great scorer he once was in Houston during his short time in Philly. It's obviously hard to maintain that torrid pace when a player is inching toward their 33rd birthday, but Harden pulled a vintage 2018 performance out of his wine cellar, exploding for 31 points and six threes.

Danny Green sure has looked like the dude who's started on three championship teams for three different organizations in the last two games. He made 10 of his 13 three-point attempts and was tied for a game-high 21 points in the Game 3 win.
Hey, if I have a hard time deciding who needs to win this award because everyone is playing so damn good, that's a great problem for the Sixers to have.

Who lost the week: Joe Girardi 👋