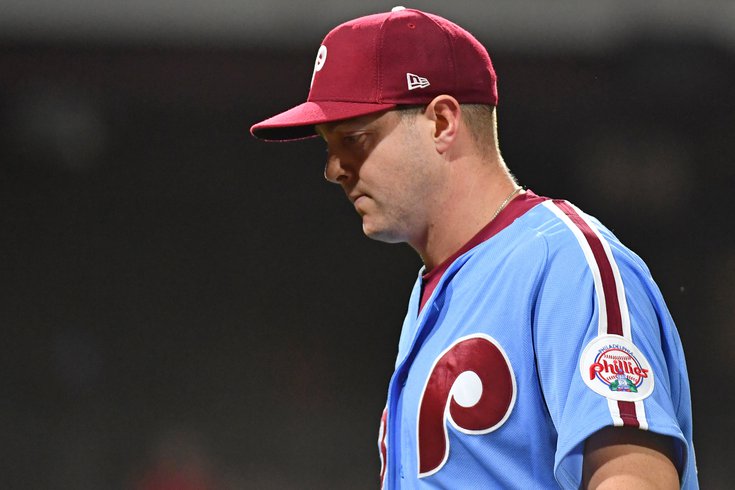 Yet another Phillies reliever walks off the field following a meltdown.

Another Phillies series recap, another Phillies series loss. Will I ever get to write about a series win? In what was originally slated to be a four-game series, the Phillies and the Mets played three games over the weekend. The Phils dropped two of three to the squad from Queens, doing so in historically embarrassing fashion that only this franchise could.

Sitting at 12-16, the Phillies are in fourth in the National League and fading fast. Yikes!

The Skinny: Rain Outs and Losses ❌❓✅❌

• The Phillies were winning 7-1 entering the ninth inning on Thursday. They lost 8-7. Very cool!

• Friday's game was rained out and will be made up as a doubleheader on August 20.

• Saturday's game was rained out and was made up as a doubleheader on Sunday.

• Phillies won the first half of Sunday's matchups, putting up three runs on three-time Cy Young award winner Max Scherzer in a 3-2 win.

• In a bullpen game later on Sunday, the Phils' pitchers faltered in a 6-1 loss.

Let's hand out those five awards...

He Might Need to Find a New Job Award: Joe Girardi 👋

In his third season with the Phillies, manager Joe Girardi appears to be completely checked out. He looks he'd rather be doing just about anything other than managing this ball club. He's six games below .500 in his time as the Phils' skipper. The Girardi era, coming off the uneven Gabe Kapler days, has simply not been a success. It's reactionary to yell, "FIRE THE COACH!" whenever something goes wrong in sports, but, jeez, for a team, without hyperbole, that has had one of the worst bullpens in the history of the sport the last two seasons, it might be time to let Girardi go to light a fire under everyone else's asses.

That loss on Thursday night was a disaster. A disaster! It was the type of loss that hasn't happened in forever:

Most recently, MLB teams were 0-684 when trailing by 6 runs in final inning before Mets stunned #Phillies tonight.

If there was ever a scenario where heads need to roll following such a cataclysmic turn of events, this might be it.
Maybe I could've just listed every reliever for this award?

Bryce Harper continues to be the Phillies' designated hitter as he recovers for an elbow injury. It's been a slow start to 2022 for Harper, but he hit two homers in this series against the Mets. His slugging percentage is back up to .500. That's a long way's off from .615 number he had in 2021 that led the National League, but still. Progress is good. He's going to need to mash like his 2021 self if the Phillies are going to climb out of this hole they seem to love digging themselves into.

In three games against New York, Jean Segura was 7-for-10 with a home run, two RBI, two runs scored and a walk. His rate stats soared following the series. He's now hitting .284 with an on-base percentage of .337 and a slugging percentage of .409. Those numbers are only a bit below his marks from his very good 2021 campaign.

Quinn is an exciting threat to steal a base or two when he reaches first, but that rarely happens. This isn't to totally roast Quinn, but he has showcased he's not a Major League player just a few days shy of his 29th birthday. The Phillies' centerfielder situation is a wreck. When the rest of the Phillies' high-priced lineup struggles, it only amplifies how center is a wasteland for the Phils.
Perhaps it's a bit unfair to throw this label upon Quinn after an 0-for-3 outing in the second half of a doubleheader, but, hey, someone has to fall on the sword for this award. He's been cold for his entire career, a .227 hitter in over 500 plate appearances since 2016.

I Weep for this Man Award: Guy in couple caught arguing on camera 😅

things are not looking good for this man pic.twitter.com/ocQoXLJCHV

This dude is in absolute hell.

Looking Ahead: To the Pacific Northwest 🌧️