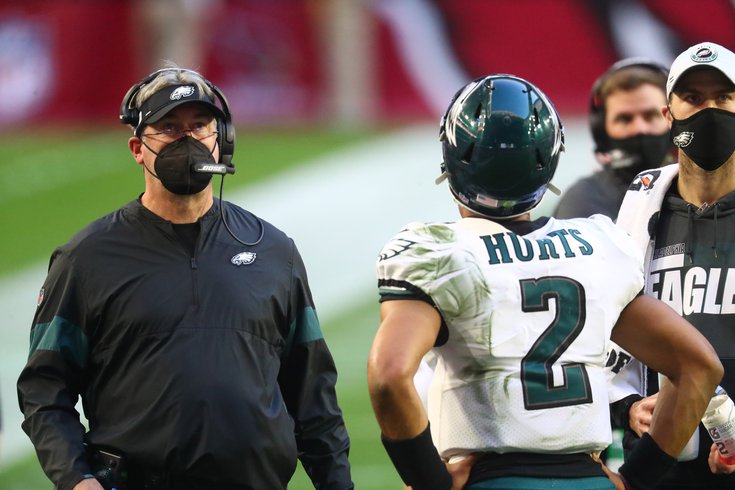 Doug Pederson and Jalen Hurts together in 2020.

In previous years, the NFL released their schedule (mostly) all in one shot, with only the international games being announced ahead of time. This year, the NFL is releasing bits and pieces of the schedule piecemeal, presumably because reporters have done a good job finding leaks, thus making the NFL's official release anticlimactic.

I'm guessing their thinking is, "If it's going to get leaked early, we may as well do the leaking?" Anyway, my understanding is that their plan is to announce certain games on the morning shows for each of the networks that televise games, on Monday, Tuesday, Wednesday and Thursday. So what the hell, let's keep track of the Eagles' schedule developments here.

• The Eagles are scheduled to play the Cardinals on the road in 2022. Because one of the Cardinals' home games is in Mexico City this season, the Eagles were contenders to play there. That's not happening, as the NFL announced that the Mexico City game will be 49ers at Cardinals.

• The Eagles' home opener will be on a Monday night, September 19, against the Minnesota Vikings. The last time the Eagles played a night game against the Vikings at Lincoln Financial Field, there were flea flickers and Foles-Skol chants.

Stay tuned on Thursday at 8 PM ET for our full schedule release, presented by @Hyundai.#FlyEaglesFly pic.twitter.com/fvTUrb9HlB

• Since the Eagles' home opener is Week 2, Week 1 will be a road game. Trust me, I did the math on that and it checks out.

• The Eagles will have two road preseason games this year, and one home game. If the Eagles continue to alternate home and road games with the Jets in the final preseason game each year as they have done for more than a decade now, the Eagles will have a home game against them Week 3 of the preseason. The first two preseason games would be on the road, if that tradition continues. The Eagles are scheduled to have joint practices with the Cleveland Browns during training camp, so the Browns will be one of their preseason opponents, likely Week 2 in Cleveland.

The Eagles will open their season in Detroit against the Lions at 1:00 p.m., per the Philadelphia Inquirer's Jeff McLane.

More on the Birds’ coming schedule ahead of the official release tonight: https://t.co/Ew1mXPicwj

The Lions finished with the second-worst record in the NFL in 2021. This could be a way to start the year off with a relatively easy win. Who am I kidding? Nothing is easy for the Birds.

They'll also have a late afternoon Christmas Eve matchups with the Cowboys in Dallas. Nothing like having the feast of the seven fishes while watching the Eagles play their biggest rival!

After taking a year off from coaching following his firing in Philly in January 2021, Pederson is the new head coach in Jacksonville. He inherits a situation not too dissimilar to the one he stepped into with the Eagles in 2016. The organization will be relying upon Pederson to maximize their young, high-draft pick QB in Trevor Lawrence, much like Pederson once did with Carson Wentz.

It's an understatement to say that there will be a ton of buzz in Philly for that one in Week 4.