He's Dave Kelleher, owner of David Chrysler Dodge Jeep RAM. His nap got attention on national TV and social media, but he totally has a reason why he was so tired 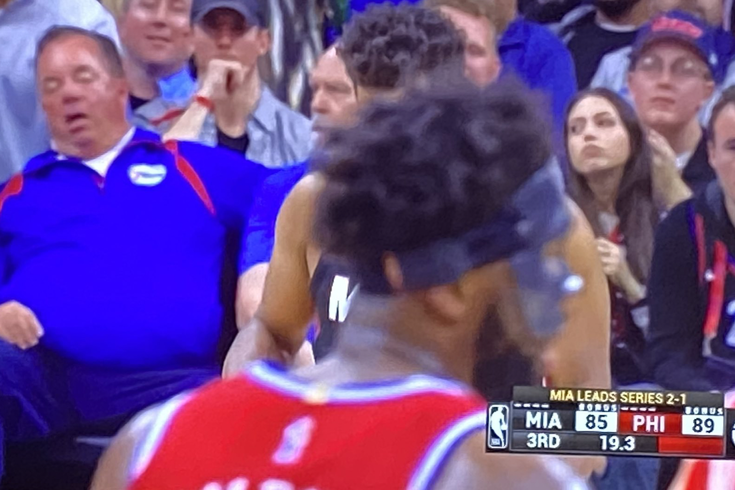 David Kelleher, owner of David Chrysler Dodge Jeep RAM in Glen Mills, Delaware County, is pictured sleeping during TNT's broadcast of Game 5 of the NBA's Eastern Conference Semifinals series between the Philadelphia 76ers and Miami Heat on May 8, 2022.

The Philadelphia 76ers evened up their Eastern Conference Semifinals series at two games apiece Sunday night with a 116-108 victory over the Miami Heat. James Harden's 31 points were punctuated by six huge three-pointers that sent the Wells Fargo Center crowd into an uproar, the kind that would leave most fans' ears ringing into Monday morning.

And then, there was David Kelleher who was sitting courtside Sunday night, mouth agape and counting sheep during the closing seconds of the third quarter. The Sixers held just a 4-point lead at the time, in a game that was basically a must-win to claw back into the series.

The moment was captured by the TNT broadcast and quickly went viral. Kelleher was instantly a meme.

Sixers fan in the first row really asleep at the game? pic.twitter.com/KNeKn2F31I

The #Sixers fan that is asleep behind the basket looks exactly like David Kelleher from David Dodge Chrysler and Jeep (@DavidDodgeCJR)#MIAvsPHI #PhilaUnite #NBAPlayoffs pic.twitter.com/rIWfiQbfkA

There's a Sixers fan underneath Miami's basket who has either died or has completely fallen asleep.

Even after the game, the "NBA on TNT" crew talked about Kelleher's courtside siesta.

"He's a little narcoleptic. It could be narcolepsy," Kenny "The Jet" Smith said.

The answer is a bit more nuanced than that, Kelleher, the owner of David Chrysler Dodge Jeep RAM, told PhillyVoice on Monday morning.

"I'm a guy that knows how to knock a few back and stay up for hours and hours and hours," Kelleher said, explaining he'd consumed four vodka tonics at the game. "It just hit me hard, and I closed my eyes – totally unbeknownst to me that it was caught on national television."

But to understand how Kelleher fell asleep in that environment, you have to look at how he spent his weekend before the game. Kelleher almost didn't make it to the Sixers game Sunday because he'd been in three different states during the 24 hours before tipoff.

Late Saturday night, Kelleher caught a flight home to Philadelphia from Atlanta and didn't get to bed until about 1 a.m. Sunday. Then he was up again at 6:30 a.m. to drive to Annapolis, Maryland, for his daughter's soccer game, which he attended before turning right back around for the two-hour drive home. He arrived back and had Mother's Day brunch with his family.

"I probably ate more than I should have," Kelleher admitted. "I was already in that kind of post-Thanksgiving-Day-meal mode (when he got to the Sixers game)."

Kelleher's dealership on Route 202 in Glen Mills — the 18th largest Chrysler dealership in the United States — has enjoyed a longstanding partnership as the official dealership of the 76ers. Kelleher's business has been associated with the team since its 10-win season in 2015-16. He was there for the absolute low-point of the Process, so it's fair to say he's a diehard fan.

"It's a great relationship," Kelleher said. "They have some vehicles. Some of their team drives my vehicles, some of their administrative team — president, CEO, coach. I'm also a sponsor. With that, I get a lot of perks. We're close. We're like family with the Sixers."

One of the perks of sitting courtside at a Sixers game is that the drinks were free.

"I mean, shame on me. I didn't even need to have a couple drinks," Kelleher said. "Everything was free, so I guess it just felt weird ordering a Diet Coke, but that probably would have been the better move."

Kelleher was at the game on Sunday night with his dealership's director of sales. Not long after the TNT broadcast captured him sleeping, Kelleher started to get text messages and calls from friends asking him whether he was awake and if he was okay.

"I'm like, 'What's going on?' And then my sales directer was like, 'Yeah, you closed your eyes for a little bit.' I said, 'No kidding, I did?' And he's like, 'Yeah!' So I figured they picked it up on TV, because everybody was writing to me. But I had no idea how big it had gotten. It's all over the place now. I heard I'm trending on Twitter!"

The sales director was a bit surprised Kelleher couldn't keep his eyes open.

"He said, 'Dave, you had four drinks,'" Kelleher said. "Literally, I could stay up in Vegas for 12 hours and drink. It was just bad timing."

It's not as if Kelleher was asleep for the whole game. He did see James Harden's electrifying barrage of threes in the fourth quarter.

"I was only asleep for a brief period of time, but it was the time when they caught it," Kelleher said. "I guess people thought I was asleep the whole game. I certainly wasn't. But yeah, what an unbelievable game. It was wonderful. And I enjoyed it. What a great win. At the time, honest to God, I had no idea that any of this had happened."

Kelleher is no stranger to the public eye. He stars in his dealership's commercials and participates in community service events. He's been in the car business since 1991. He's a guy whose name and face are out there.

"It's not unusual for me to be in the public eye. This one is beyond anything that I've done before," Kelleher said. "I did a Super Bowl commercial this year and nothing was equal to falling asleep at a Sixers game."

Kelleher knows that he's bound to take some ribbing for this situation, and he fully understands why.

"I get it. I get that everyone saw the moment in time and thought, how can the guy be asleep courtside at one of the most exciting games? But I was just exhausted," Kelleher said. "It's a s***ty look, but I'm an easygoing guy. I can certainly take one to the chin — and I'm just having fun with it, you know? It's my moment in time, and for a guy that gets a lot of moments in time, this is just fun."

He wasn't thrilled about Charles Barkley's comments, even though Barkley was basically right. He lacked the context of a father and husband running around to out-of-state soccer games at the crack of dawn and then getting back in time for Mother's Day brunch.

"That's probably the only negative part. I have great deal of respect for Charles (Barkley), but to make that call without knowing, I mean, Charles is well known for liking to have fun, as well. But nonetheless, it is what it is."

"Yeah ... not so much," he said. "They don't feel so good about it. That's fair. They're kids. I'm a little disappointed about that, but other than that, we're good."

The experience will not dissuade Kelleher from going back to the Wells Fargo Center for Game 6 on Thursday night.

"I have a suite for Game 6," Kelleher said. "They won't be able to catch me on Game 6. Actually, I don't think I'll be drinking at a Sixers game for a while."