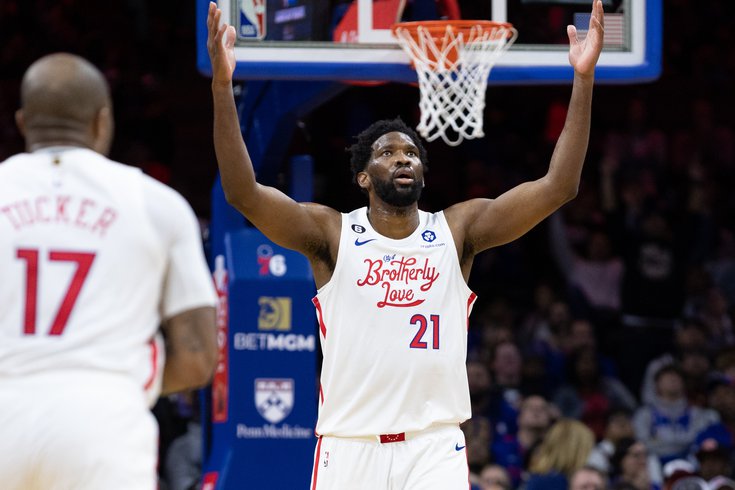 Joel Embiid has been carrying the Sixers over the last few games.

The second batch of fan voting for the 2023 All-Star vote are in, and Joel Embiid is in a dogfight with Jayson Tatum for the final frontcourt spot in fan voting. Embiid had the lead after the first round of voting, but he now trails the Boston Celtics star by a little over 33,000 votes. Pending a final fan tally and votes from players and media members, whose contributions each make up 25 percent of the final rankings, Embiid could end up simply making an All-Star team rather than starting in the game.

To which I say — who cares?

I don't say this to diminish the All-Star Game, the work it takes to make one, the accomplishments of Embiid, or awards as a general concept. In fact, while a lot of media members downplay the importance of individual hardware and the debate surrounding them, I lean the opposite way. Of course this stuff matters!

In 25 years, when these guys are relegated to YouTube highlights and Basketball Reference pages and the first-hand accounts of all the people who watched them, a new generation of fans will lean on the same signposting we all have to measure a player's greatness. They will count rings, MVPs, All-NBA teams, and All-Star appearances like the rest of us, and with the financial incentives tied to media voting, I think it's a subject everyone in my profession should take seriously.

Every year for the last half-decade, we've gotten to discuss a very cool honor for Embiid. Last year marked his fifth straight start in the All-Star Game, which puts him one short of Charles Barkley's streak and two shy of Allen Iverson's streak with the franchise. A break in that run would slow him down from matching some of the other big names in franchise history, with Embiid still chasing the likes of Dr. J and Dolph Schayes, who each started 11 All-Star outings for the franchise. History should be celebrated even as it is happening, and Embiid has been on a special run these last few years, something we should not take for granted.

As of second fan returns, Jayson Tatum has moved past Joel Embiid for the final starting frontcourt spot in East All Star voting.

Reminder: Fan voting makes up 50 percent of final vote, 25 percent each for players and media pic.twitter.com/k1VpEbZaZQ

But if he doesn't start an All-Star game because Tatum edges him out by less than 50k fan votes, or because the media is split on who to elect out of a group of Kevin Durant, Giannis, Embiid, and Tatum, it is not a grand injustice, or a conspiracy against him, or even something to get that upset about. At the end of the day, it has no impact on his impact, and if anything, it might work out better for the Sixers in the long run.

This isn't a case where Embiid's stats dwarf any of the players in the mix for a start. Giannis Antetokounmpo is in a "down year" by his standards and is averaging 31 points, nearly 12 rebounds, and 5.3 assists per game on a 27-13 team. Tatum is averaging 30.8 points, 8.2 rebounds, and 4.2 assists on a 30-12 Celtics team. And prior to his injury, Kevin Durant was playing the best basketball of anybody in the league, scoring 29.7 points per game on 55.9 percent from the field with 6.7 rebounds and 5.3 assists per night on a 27-13 team.

Embiid's numbers — 33.6 points, 9.9 rebounds, 4.4 assists for a 25-15 team — are comical, roughly equal to or better than his peers in every department except for team record. A number of metrics, from those basic counting stats to more advanced stats, suggest Embiid has been the "best" player in that group. But all of these guys are having preposterous seasons during an astounding offensive season league wide,

If you were asking me personally, I would bump one of Tatum or Giannis (feel stronger about the former) out of that group for Embiid, as I think the "games played" argument being made against Embiid is more compelling for year-end awards than a midseason exhibition meant to be a showcase for the fans. We've long passed the point of needing positional rules for the All-Star Game, so voters and fans shouldn't be boxed into this choice, to begin with. But the only potential side effect here is a good one for Philadelphia. Maybe being slighted in voting gives Embiid a bit of extra motivation during the second half of the season.

Embiid has not been shy about his desire to chase top individual honors, dating back to wanting to win DPOY as a young player. It's something he has often been mocked for in other markets, and to this writer, that's simply a reflection of his inability to win yet. Once guys climb the mountain and become a champion for the first time, the thirst for more honors gets framed as "maniacal competitiveness" or "the desire to stay great" rather than the self-centered complaining some frame it as from Embiid. The truth behind Embiid's self-advocacy is simple — he cares about his craft, he works hard, and he's not shy about saying he wants to be recognized for it, even with a championship being his top priority. Anyone who doesn't get that isn't worth the time or energy to begin with.

It would be a small slight, but a slight all the same, a kick in the ass for a guy who is as in tune with these conversations as any star in the league. And as we've seen throughout his career, there are different (and noticeable) levels of motivation for Embiid throughout a long season. The big man is able to score 30+ on autopilot at this point. Adding more fuel to the fire could be a catalyst for an even more dominant finish to the year, one that will see the Sixers jostling for positioning in a tight Eastern Conference standings race.

He's going to be there/be selected for the team no matter what. There's no danger of Embiid missing the All-Star Game altogether, save for an injury ruling him out or Embiid refusing to show up for it. He will be honored as one of the best players in the world, as he should. Much ado about nothing, says the guy who wrote 1,000 words on the subject.

In any case, I would suggest spending less time on All-Star arguments and more enjoying his play for the Sixers. That last part has seemed hard for Sixers fans to do this year, and while I understand some of the frustration, you might look back on your reaction to a 25-15 team and regret the amount of angst you had over them. You only get so many opportunities to watch a player this good suit up for a team you follow.