John McMullen: Why those Deshaun Watson to the Eagles rumors are gaining steam 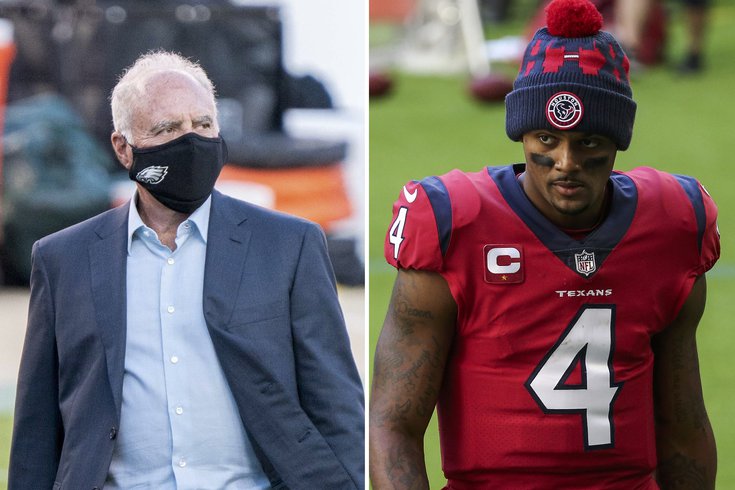 Down in Houston, there is still plenty of smoke surrounding Deshaun Watson, speculation that is presumingly going to result in the 25-year-old superstar quarterback being placed on the Commissioner’s Exempt List for the foreseeable future with training camps looming later this month.

Those persistent plumes of conjecture can often reach over 1,500 miles away to Philadelphia and the Eagles, a team many believe is in a unique position to strike when the time is right to acquire what is essentially a unicorn when it comes to the business of football.

Even if you spend the majority of your days with your head in the sand, the first reaction to that would be, "What’s the catch?" Young, proven quarterbacks with top-five skillsets never hit the open market in the NFL.

The tutorial from there includes everyone from Jack Easterby to Rusty Hardin to Tony Buzbee, nearly two dozen masseuses, and Watson’s own alleged disturbing behavior.

In short, it’s a mess but the talent vs. tolerance equation in the NFL is no thesis. The oxymoron of settled science applies.

The more talented you are the more tolerance you receive in the league, and the fact there are maybe five people walking planet earth who can credibly argue they might be better at perhaps the most important position in all of sports will overcome the doozy of 22 civil allegations essentially accusing Watson of being a serial sexual abuser in the so-called “Me Too” era where men of means, who often used to get away with such things, are instead turned into pariahs in the court of public opinion.

To be fair to Watson — if that’s even a thing these days —  all the allegations against him to date remain of the civil variety with still zero movement on the criminal front nor any growing sentiment there will be.

And, to be blunt, Watson is playing in the NFL again unless that option is taken off the table from a legal perspective.

So maybe the only question is who bites and takes the public relations hit?

There will be no shortage of suitors when the time comes. For months executives around the league have talked about an eventual Eagles pursuit of Watson being an inevitability.

That only picked up last week — as it usually does — when Adam Schefter chimed in with his two cents on 97.5 The Fanatic while appearing on John Kincade’s show.

Schefter was not breaking any news, but former Jets and Dolphins exec Mike Tannenbaum, who incidentally helped start Eagles GM Howie Roseman in the league by recommending him to Joe Banner, picked up the baton and called the perceived Philadelphia interest an open secret around the NFL.

We discussed where Deshaun Watson might play this year on @getupespn with @espngreeny and @jfowlerespn. pic.twitter.com/OZ6rpNBPJ0

Multiple sources both on and off the record had been saying similar things for weeks — among them Tannenbaum, weeks earlier on my own show — with the logic behind it grounded in Roseman’s reputation, the Eagles’ 2022 draft capital, and the obvious need for a quarterback with the unproven Jalen Hurts set to be given one ultra-narrow path of opportunity in 2021.

Tannenbaum let the same cat out of the bag in early June with me. About 10 days before that NFL Media analyst Mike Garafolo was even more definitive. Asked about the potential of Watson to the Eagles back in May if the allegations evaporated, Garafolo didn't hesitate.

"I mean faster than the evaporation occurs. There is still liquid," Garafolo joked. "Quickly. [Howie Roseman] is definitely in on it. There's no question about it."

Local reporters can scream from the mountain top, however, it’s EF Hutton when Schefty rubber stamps anything.

Until the uncertainty is removed, the Eagles are no closer to getting Watson than they were when the Texans finally decided they would indeed have to move the embattled quarterback, but it was interesting to see the factions line up when the thought became real to them after Schefter’s blessing.

A former Eagles’ personnel executive claimed that Christina Weiss-Lurie would probably put a stop to the thought and some fellow reporters contacted me to clutch their pearls over the Eagles coming out on the wrong side of that talent vs. tolerance equation.

And maybe that’s true, but what we do know about Jeffrey Lurie is that he has been consistent when it comes to off-the-field issues. Placing Watson on a personal blacklist after he’s cleared to return to the league would actually be the hypocritical move for the Eagles’ owner.

For most, hypocrisy is second nature. It’s just like breathing to stick the finger up in the air and feel the wind before the comfort of going along to get along is used to activate the moral compass. Too many comfortably toggle between racism, animal rights, anti-Semitism, and alleged sexual assault like it's a twisted form of currency. Morality, however, should not cater to the best lobbying effort in the activist community.

You either believe in second chances or you don’t.

Making a run at Watson isn't about Roseman, Nick Sirianni's offense, or Jalen Hurts' development, it's about the owner deciding if he wants the superstar with the Q-rating stained by scandal.

The names Riley Cooper, Michael Vick, and DeSean Jackson should tell you Lurie has already staked his position.