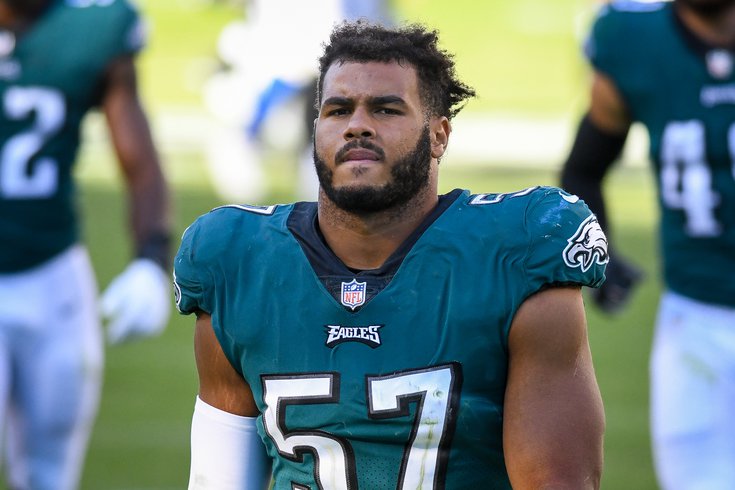 The excitement surrounding the Eagles has reached a fever pitch in the month of May with spring providing a filter for the kind of high-profile acquisitions the fan base demands.

There’s the proven – Haason Reddick, A.J. Brown, and James Bradberry – along with the well-known projections as the 2021 Alabama draft turned into the 2022 Georgia selection process with Jordan Davis and Nakobe Dean.

Nothing’s perfect, of course, and game days will shine the brightest of lights on the smallest of blemishes but with June just around the corner, it’s hard to argue with what Howie Roseman has been able to cobble together despite tremendous upheaval in his scouting department along the way.

One Eagles player who’s rarely discussed outside the bubble of the hardcore film junkie is middle linebacker T.J. Edwards and when the Wisconsin product is mentioned it’s usually in the vein of wondering how quickly Dean can get up to speed to replace him.

Pedigree is a funny thing in the NFL.

Despite the fact that player development is real, a thesis validated every year by the ascension of late-round picks and undrafted free agents coupled with underachieving performances by many first-rounders, too many observers cling to draft designations like some kind of irresistible force trying to break through an unmovable object.

And it works at both ends of the spectrum.

Had Derek Barnett been a third-round pick and not No. 14 overall in 2017, he’d be regarded as a valuable rotational player entering this season instead of a penalty-prone pariah who Roseman shouldn’t have brought back even with a cost-effective deal.

Conversely, if Edwards, 25, had say a second-round label affixed to him instead of the UDFA tag in 2019 more might have noticed that the Eagles found and developed a pretty good LB by 2021, so good he was graded No. 10 overall by Pro Football Focus.

Instead of ‘wow, Edwards was graded ahead of future Hall of Famer Bobby Wagner or coverage star Eric Kendricks or the Super Bowl-pedigreed Lavonte David,’ it’s "I hope the undersized guy with injury concerns who beat Alabama can get on the field quickly."

When Philadelphia acquired Brown on draft night coach Nick Sirianni harped on the fact that there was no projection with the big-bodied receiver and while Edwards hasn’t reached a Brown-like status as a player he did take an impressive step last season to the point Jonathan Gannon is no longer wondering what he has in the player.

That wasn’t the case entering last season when some really smart football minds thought that the speed of Eric Wilson was a better alternative.

Edwards, who will be entering his fourth season in 2022, is used to being doubted after entering the league with the lesser pedigree.

“I think my first couple years, that was my thing,” Edwards admitted last week during a media availability session. “I was underrated and all that. I think I paid a lot of attention to it, but I don’t think it’s anything that’ll [ever] go away for me.”

Edwards is spot-on there.

Early in my reporting career, I was around John Randle, an undersized defensive tackle who entered the NFL in 1990 as an UDFA out of Texas A&I (now Texas A&M Kingsville) when the draft was still 12 rounds. Almost 15 years later after six first-team All-Pro berths and an All-Decade nod, Randle was on the fast track to Canton and was enshrined in the Pro Football Hall of Fame by 2010.

Over those 20 years, Randle never lost the chip on his shoulder until he removed it to put on his gold jacket.
No one is enshrining Edwards to anything just yet but it is striking to see how much of an afterthought he is to many, something explained by the LB himself.

"I was undrafted and I was like ninth on the depth chart,” Edwards recalled when he was trying to break through as a rookie.

To their credit, the Eagles did recognize that Edwards was outperforming his UDFA status and extended him in-season in 2021, a strategy that removed his restricted free agent year at essentially a second-round tender level.
That just means that Edwards has to ball out again in 2022 to earn a multi-year deal in Philadelphia or somewhere else in free agency.

Dean, of course, was the 2021 Butkus Award winner as the nation's top LB on one of the best defenses in the modern college era. The irony is that Edwards' college resume was comparable as a first-team All-American in 2017 and a finalist for the Butkus Award that was awarded to another Georgia LB who ended up being a first-round pick in Roquan Smith.

The only real knock on Edwards was the number 4.87, his 40-yard dash time.

Had Edwards been born a generation earlier when being instinctive and going downhill was more important for linebackers than being able to keep up with running backs and tight ends in the passing game, it wouldn't have been hard to envision him as a potential first-rounder.

Moving forward Edwards is never going to be a track star but has worked hard to improve his movement skills and the player you see on the field these days isn’t running a 4.87. That, coupled with the veteran’s natural feel for the game, means he’s better in coverage than a lot of 4.5 LBs like Wilson who are apt to take false steps.

“I feel like I’ve always been (a three-down LB) but it’s really just being consistent in that,” said Edwards. “I think it’s easy to say and easy to say you want all these things and all that, but until you do it, it’s hard to believe.”

The other part of being a three-down LB in the current landscape is the so-called green dot, a tiny sticker that signifies the player communicating with the defensive signal-caller pre-snap. That used to always be the job description of every MIKE LB as the so-called quarterback of the defense but the modern pass-happy NFL means the green dot is either a three-down second-level player if you can find one, or a safety.

And Edwards remains the leader in the clubhouse for that role with the Eagles over Dean and Kyzir White, as well as safeties Anthony Harris and Marcus Epps.

“I’m just real excited about being consistent and being a leader on this defense,” Edwards noted. “... I want to use my voice as much as I can. I think I’m a guy who’s seen a good amount, a couple of years in this scheme and obviously being around the building, kind of know the ins and outs and being able to relay that.”

Edwards not only expects many to doubt he can replicate his 2021 season, but like most UDFAs who make it to the brink of vested-veteran status, that’s his fuel.

Edwards is only worried about getting better, not some kind of acceptable stasis so don’t be surprised if the calendar turns to 2023 with a new contract and many still wondering who’s going to replace him.

“It’s just one of those things where I don’t think [the UDFA tag will] ever leave, but I definitely feel a lot more confident this year and ready to take that next step," Edwards explained. “... That’s kind of my mindset going year to year. ... I just want to pass along what I’ve seen and be a sponge myself, too. I want to learn from guys like Kyzir and the coaches giving us new looks, so I want to be a sponge and gain my knowledge, too.”