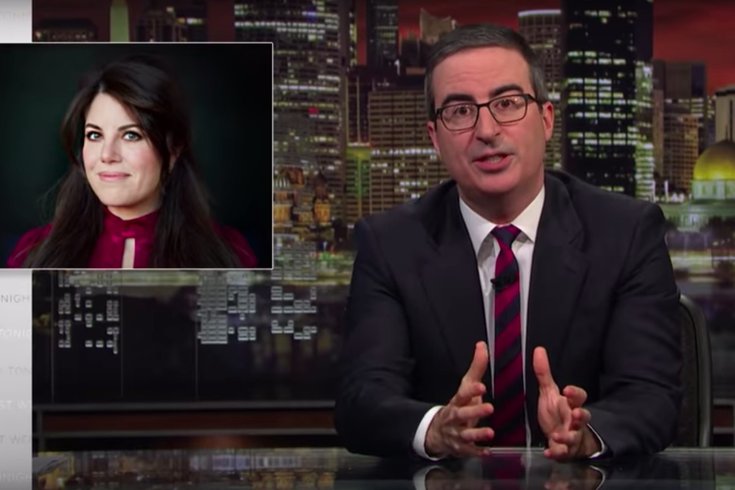 John Oliver dedicated Sunday's episode of "Last Week Tonight" to the topic of public shaming, delving into the positives and negatives of viral rage an indignation – while also revisiting the Monica Lewinsky and President Bill Clinton scandal, one of the country's most infamous public shamings.

Oliver noted there are times when public shaming can be beneficial, as with the case of Fox News host Tucker Carlson – for whom Oliver made an apt hashtag too vulgar to print here. In that case, Oliver argued the public shaming highlighted wrongdoing. The same could be said about the widespread and ongoing reaction to last week's college admission's scandal.

Such shamings can result in positive change, Oliver said, perhaps not in Carlson's case, though, as he has refused to apologize for his comments.

On the other side of the spectrum, however, there is the case of Jennifer Connell, who was dubbed by many media outlets as the "worst aunt ever" due to misleading reporting of a case of her suing her nephew over a broken wrist caused by a hug. In reality, she was suing homeowner's insurance policy so she would have money to pay for medical expenses.

"When joining in a pile-on, there is a lot to take into account," Oliver said.

"And when millions of people all feel the need to weigh in and to do it potentially for years, the punishment can be vastly disproportionate to the offense."

Oliver pointed to "perhaps the best example" of this: Monica Lewinsky.

Lewinsky's now 20-year-old sexual encounter with President Bill Clinton, the incident that occurred when Lewinsky was only 22 years old, sparked a million late-night jokes – including some made by Oliver – and, as Lewinsky has noted herself, hundreds of rap lyrics.

Some late night show hosts have since expressed regret about the relentless jokes made at Lewinsky's expense, though perhaps Jay Leno still owes an apology – he once wrote a Dr. Seuss-style story about her titled "The Slut in the Hat."

Oliver dedicated 10 minutes to the episode to an interview with Lewinsky, in which she discussed the fallout of her public shaming, how she has gotten through the experience well enough to find humor in it, and how the scandal would have been better or worse in the age of social media.