Jane Krakowski explains how medical devices are like Batman 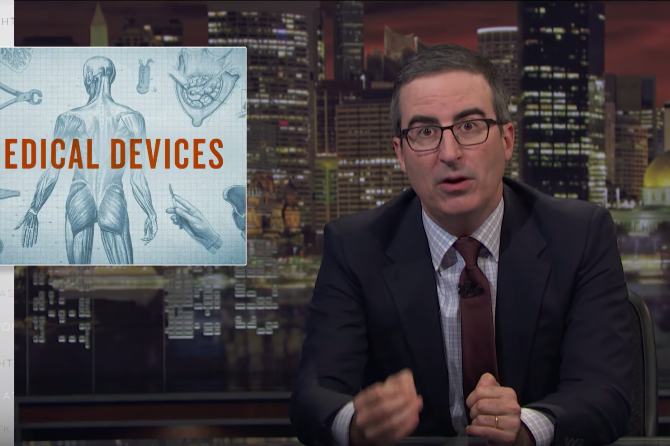 John Oliver took a look at the unvetted world of medical device approval on Sunday's "Last Week Tonight," and he even has a safe word ("opposum!") for when the facts get a little too scary.

Before diving deep into the issues surrounding certain medical devices, he talked about the root of the problem: the difference between "FDA cleared" and "FDA approved." The former has a much less vigorous process to test the efficiency of a product, and yet, most medical devices are only "cleared" and not "approved."

He began by looking into three recalled medical devices – from a metal hip implant that turned some patients' surrounding tissue into what Oliver calls "black cheese" to a birth control IUD whose clinical trial convinced women to rate the product as "excellent" even though it caused them pain. But don't even get him started on surgical mesh, specifically vaginal mesh, which felt, in the words of one patient, like a "cheese grater."

The comedian then brought out Jane Krakowski to talk about the dangers of medical implants in a skit that resembled a class-action lawsuit TV ad. "Treat medical devices like guys who have played Batman,” joked Krakowski. “Some are great, but new ones aren’t necessarily better, and there are a few you definitely don’t want to let inside your body.”