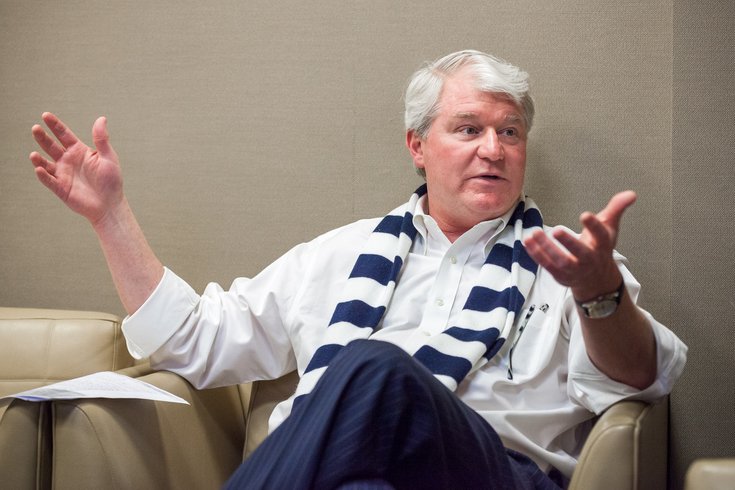 In an interview on Tuesday afternoon, union leader John Dougherty discusses the events around a Jan. 21 altercation at a non-union job site in South Philadelphia.

Labor leader John Dougherty says he acted in self-defense during a physical altercation with a nonunion contractor in January, claiming a story published Tuesday by The Philadelphia Inquirer sought to defame him by portraying the incident inaccurately.

Dougherty, business manager of IBEW Local 98 and the Philadelphia Building and Construction Trades Council, claimed the Jan. 21 incident began when Joshua Keesee, a nonunion contractor, sucker-punched a union worker and later took a swing at Dougherty near a construction site in South Philadelphia. His story runs counter to the account Keesee and his attorney, Robert Mozenter, told The Inquirer.

"Everything in that Inquirer story was wrong – and you can say that," Dougherty said. "I think it was the most disingenuous, irresponsible piece of writing I've seen to date – and I've sued people for less than that. It was just irresponsible, disingenuous."

Dougherty claimed the Inquirer sought to tarnish his reputation because the newspaper is upset at the outcome of litigation that went in his favor.

"I can't think of any reason why they would have done something other than to try to damage my reputation," Dougherty said.

He alleged that a video that accompanied the Inquirer's report is at odds with its reporting of the story.

“The video absolutely tells the truth and contradicts the story that the Inquirer told," Dougherty said. "We explained that to them."

Dougherty provided a statement to The Inquirer through his spokesman Frank Keel, but he claimed the newspaper failed to provide him an appropriate amount of time to respond. He said the newspaper acted with a "false urgency" by reaching out to him late Monday night.

Inquirer spokeswoman Amy Buckman did not respond to a request for comment made early Tuesday evening.

STARTED WITH A STICKER

The incident occurred around 8:20 a.m. near a construction site at Third and Reed streets. Local 98 electricians have long protested outside the site, pointing to various alleged code violations. They were protesting on the day of the altercation.

Dougherty, 55, said Keesee previously had been asked to remove a Local 98 sticker from the rear window of his truck. As Dougherty was driving by the site on his way to work, he said he noticed Keesee, 36, by his truck. Dougherty parked his vehicle, approached Keesee and asked him to remove the sticker.

Keesee responded by launching into a curse-laden tirade criticizing Dougherty, Local 98 and others, Dougherty said. A number of people approached, Dougherty said, and Keesee eventually gave permission for someone from Local 98 to remove it.

"Right now, none of us realize that Tommy was bleeding," Dougherty said. "We walk away. A couple of people are taking (Keesee) down the street. I'm asking him, 'What the heck is he doing?'"

As Dougherty walked back to his vehicle, he said Keesee began threatening his family. Dougherty said he responded that Keesee could simply deal with him.

"We literally squared up. He threw a punch. I blocked it. I hit him twice. End of dispute after the second punch."

Dougherty said a crowd gathered and Keesee began reaching into his pocket. Another construction worker reached into his car, pulling out a phone and "something black."

Dougherty said "a little scrum" that included "more pushing and shoving" ensued before he and the Local 98 members returned to his vehicle.

A video captured by a neighboring business and published by The Inquirer does not show any of the physical altercation.

Dougherty is seen walking along the sidewalk toward Keesee as the contractor is pulled back by another man. Three Local 98 members – Chris Owens, Niko Rodriguez and Tommy Rodriguez – are with Dougherty. Tommy Rodriguez can be seen with a bloody forehead, which required stitches.

The group then moves out of camera range for about 25 seconds before Dougherty and his Local 98 members reappear, walking toward their vehicle. Dougherty shakes the hand of a local bystander. Ten seconds later, Keesee reappears and Dougherty approaches him.

The group again moves off camera with two Local 98 members running across the street toward Dougherty. After several seconds pass, Tommy Rodriguez, who Dougherty said was tending to his injuries, runs over.

A few seconds later, the Local 98 members can be seen walking back across the street toward their vehicle.

'THIS IS NOT A JOKE'

"When I left my house that morning, I had no intention of being anywhere close to an altercation," said Dougherty, noting he was dressed in business attire for a series of meetings with prominent developers. "I've seen that sticker before on the truck, but I've never seen the guy getting out of the truck."

Keesee told The Inquirer that he agreed to remove the Local 98 sticker from his truck, but also told Dougherty that he was not intimidated by the union leader. Dougherty began talking with clenched teeth, Keesee said, and "just moved forward and threw a left-and-right combo."

Keesee, who suffered a broken nose, told the newspaper that he did not swing back at Dougherty because he did not want to shatter his sunglasses and concluded he was elderly:

"I definitely didn't want to hit him," Keesee told The Inquirer. "The first shot I just took. He hits me twice and they kind of converge on me."

Mozenter, Keesee's lawyer, did not respond to a message seeking comment on Dougherty's claims. When PhillyVoice briefly reached him before talking with Dougherty, Mozenter said police recommended charges after conducting an investigation.

Keesee plans to pursue the matter in a federal civil lawsuit, if necessary, Mozenter said.

"We're going to go through with this," the attorney said. "This is not a joke."

District Attorney Seth Williams referred the case to the state Attorney General's Office, citing a "longstanding professional relationship" with Dougherty. Attorney General Kathleen Kane, who, like Williams, has accepted political contributions from Local 98, said another state attorney will decide whether to pursue charges against Dougherty.

"I'm not one bit concerned who has it, because there's nothing here that merits a charge," Dougherty said.

Dougherty said he did not contact police after the incident, noting they did not bring charges when he filed a complaint following an incident at the same construction site on May 10, 2014.

During that incident, Dougherty said a contractor threw a brick that hit him in the head. A witness picked the perpetrator out of a lineup, Dougherty said, but police never filed charges.

A police report from the incident says neither side sought to pursue criminal charges, but Dougherty claims the report was filed by a Philadelphia police officer he later learned was moonlighting as an electrician at the site. The officer, Frank Lafontano, was forced to give up the electrical work after Local 98 filed a complaint, Dougherty said.

Philadelphia police did not immediately respond to a request for comment about Dougherty's allegation.