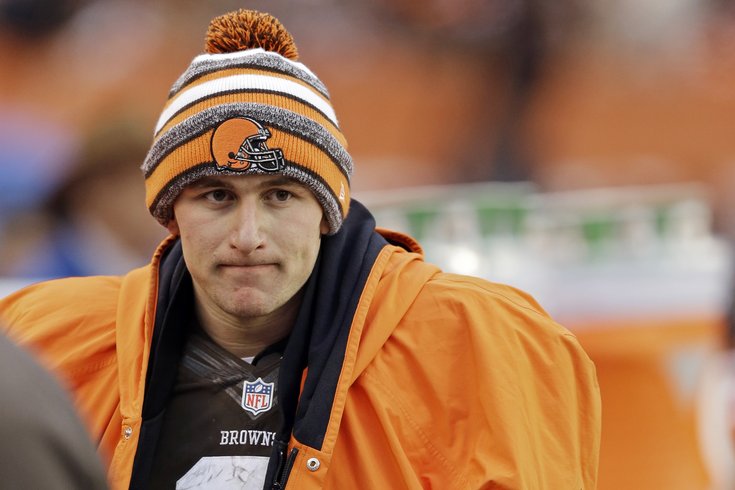 Johnny Manziel watches from the sidelines in the fourth quarter of a December game against the Bengals in Cleveland.

Following a rough rookie season in the NFL, Manziel has entered a treatment program for unspecified reasons, an adviser for the Browns quarterback said in a statement released by the team on Monday.

"Johnny knows there are areas he needs to improve on to help him be a better family member, friend and teammate, so he decided to take this step in his life during the offseason," Manziel adviser Brad Beckworth said. Beckworth said the former Heisman Trophy winner entered the unnamed facility last week. He said Manziel's family is asking for privacy until he rejoins the team.

Beckworth's statement did not indicate reasons for Manziel needing treatment. However, the 22-year-old QB's penchant for partying followed him from college into the pros and Manziel's nightlife has been well-chronicled by both social and mainstream media.

The location of the facility where Manziel is staying is not immediately known.

Browns general manager Ray Farmer said in a statement that the team fully supports Manziel and respects his initiative in entering treatment. The team will respect Manziel's privacy during treatment, he said.

"Our players' health and well-being will always be of the utmost importance to the Cleveland Browns," Farmer said. "We continually strive to create a supportive environment and provide the appropriate resources, with our foremost focus being on the individual and not just the football player."

Manziel, who won the Heisman as a freshman at Texas A&M where his playmaking skills earned him his "Johnny Football" nickname, has faced questions for several years about his active nightlife. After he was drafted in May by the Browns in the first round, Manziel was repeatedly photographed drinking alcohol during weekend trips to Las Vegas. A photograph of Manziel floating on an inflatable swan raft swigging a bottle of champagne went viral.

The Browns became increasingly concerned about Manziel when a photo surfaced of Manziel holding a rolled bill in a bathroom.

Manziel often dismissed criticism about his behavior, insisting he wasn't going to let others dictate to him how to live his life. However, following the season, Manziel seemed embarrassed by some of his choices and vowed to change his ways.

"It's about actions," he somberly told reporters on Dec. 29. "It's about being accountable and doing what I'm going to say. ... I'm either going to learn or I'm going to be finding something else to do."

Manziel spent the majority of last season as starter Brian Hoyer's backup before coach Mike Pettine switched their roles with the team still in the playoff hunt.

Manziel made his first start on Dec. 14 against Cincinnati, but failed miserably. He appeared unprepared and overmatched as the Bengals defense harassed him into two interceptions and the Browns were throttled 30-0. Manziel completed 10 of 18 passes for 80 yards, was sacked twice and looked nothing like a player capable of ending Cleveland's long search to find a franchise quarterback.

The next week at Carolina, Manziel injured his hamstring on a running play before halftime and was replaced by Hoyer.

Manziel was then fined by the Browns for missing a medical treatment before the season finale at Baltimore. Manziel promised he would change following the season, apologizing to Cleveland's fans and his teammates for being a distraction.

But hours after apologizing, he was photographed in Miami Beach and over the next few days there were photos of him on Instagram in a Houston nightclub and in Aspen, Colorado.

The Browns have made it clear to Manziel that they expect more from him if he wants to be their leader.

Manziel's uncertain future could influence the Browns' plans at quarterback. Hoyer is scheduled to become a free agent, but the Cleveland native may be willing to re-sign with Cleveland, especially if Manziel is not in the picture. The Browns also have two first-round picks (Nos. 12 and 19) in this year's draft and may be willing to use them to land a quarterback.