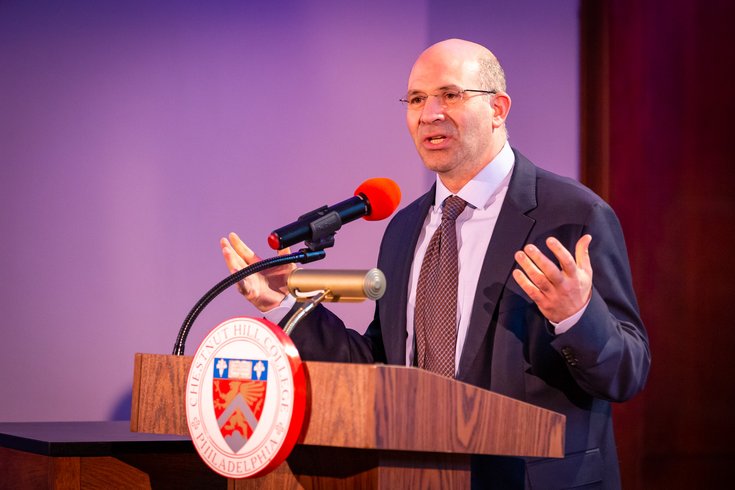 Keynote speaker, Dr. Jonathan Brody, gives a lecture entitled, "Why is Pancreatic Cancer the Most Difficult Cancer to Treat, yet we know so much about it?" at Chestnut Hill College, Wednesday, April 10, 2019.

Each year, more than 55,000 Americans are diagnosed with pancreatic cancer. Despite being the one of the most heavily researched and well-understood cancers, it remains one of the most difficult cancers to treat — and among the deadliest.

Dr. Brody began Wednesday’s lecture with some sobering context for the audience. After asking for a show of hands for who had been affected by cancer (almost every hand in the room shot up), he noted that pancreatic cancer is now the third-leading cause of cancer-related death in the United States. Of the 55,000 people afflicted by this cancer annually, 44,000 will succumb to the disease, making it among the deadliest cancers.

The pancreas is an organ that is part of the digestive system. Located in the abdomen, it helps regulate blood glucose, break down nutrients, and neutralize stomach acids. This harsh environment helps the pancreas do its job, but as Dr. Brody noted, it’s also a significant component of why this cancer is so difficult to treat.

Using the analogy of the natural world, Dr. Brody observed that most cancers thrive in the lush environments of the body where they can grow. The pancreas, in comparison to most places, is more like a desert: “Pancreatic cancer develops in a harsh setting, which is why it is resilient to so many therapies.” It metastasizes particularly easily for this reason: almost anywhere else in the body is a more favorable environment than the pancreas.

Dr. Brody shared the timeline of pancreatic cancer with the audience, which begins 20 years before the cancer can be diagnosed. An initiation event triggers the cell mutations that eventually become the cancer, and the current paradigm is to identify the cancer, and treat it aggressively. Despite this approach, the five-year survival rate remains only 9 percent. As far as a cure goes? Only 1 to 2 percent of pancreatic cancer patients are “cured” (have the same lifespan as cancer-free peers), even when diagnosed in the earliest stages.

Pancreatic cancer was genetically sequenced in the early 1990’s. That research provided a deep understanding of the cancer, but even 30 years later, researchers have fundamentally not learned anything new. Modern technology speeds the process of sequencing each person’s disease, but other advances remain limited — largely because, while deadly, the cancer affects relatively few people.

At the same time, each person’s cancer is unique, and must be treated that way. In pursuit of this effort. Dr. Brody’s lab conducted an initiative, “Know Your Cancer,” which sequenced 1,200 different tumors around the country. This research revealed that 50 percent of the mutations in these cancers were actionable, with 25 percent of them “highly actionable” – meaning there was a therapy available to treat them.

Because pancreatic cancer has so many possible mutations, identifying all of these specific sequences is vital to a specific patient finding a cure. And, Dr. Brody noted, since pancreatic cancers can continue to mutate after treatment begins, having awareness of all the different mutations is essential. Dr. Brody is spearheading future initiatives to set up clinical trials and advance molecularly targeted therapy to apply this research.

Before taking questions, Dr. Brody closed his remarks by pointing out that while there are some obvious assumptions regarding precision therapy, the non-obvious ones may be where the cure lies: that current and future researchers must look beyond genomics and rethink rapid tumor evolution. This thought provoked serious thought among the audience: long after Dr. Brody’s lecture concluded, students were still surrounding him in St. Joseph Hall, peppering him with questions.