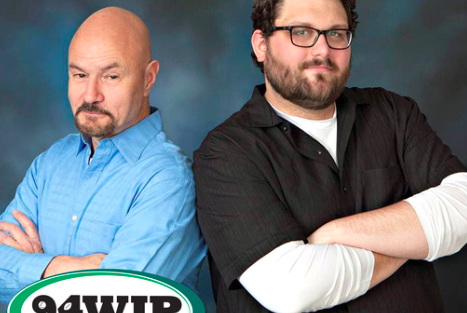 Tony Bruno and Josh Innes parted ways after a brief run together on Sportsradio 94WIP in mid-2015.

Look back a couple of years at Philadelphia's sports radio landscape and large parts of it are almost unrecognizable today. Whether or not that's a good thing is up to the listener to decide, but there's no question that in a city whose sports teams have struggled for a while now, the drama of who gets to complain about it on the airwaves has at least been an interesting bloodsport.

No moment over the past few years has been as baffling, in the moment, as the abrupt departure of Tony Bruno from his newly created afternoon show with former Sportsradio 94WIP host Josh Innes. In a matter of weeks, the odd duo of bona fide traditionalist and filterless maverick were pulling great numbers, but Bruno decided to call it quits because, as he said at the time, "the modern world of radio and social media has sucked the fun out of doing this," for various reasons.

We all know what happened over the next year or so for Innes, who continued to push boundaries alongside a rotating cast of co-hosts until, inevitably, a war with 97.5 The Fanatic's Mike Missinelli elicited racially charged comments that killed him in Philadelphia. Innes landed at SportsTalk 790 back in Houston last October.

What would have happened had Bruno stayed at WIP? It's impossible to say, but yesterday Josh Innes had his former partner on his show in Houston to discuss what went down and clear the air (h/t CrossingBroad).

It's an interesting and honest exchange that gets into the realities of taking your work home with you when you have a job in Philly sports media.

"I would go home at night and even though we were number one, you know how it was, people were like ‘Well I don’t like that Josh guy how can you work with him?’" Bruno explained. "And then your friend would say Tony is alright but I wanna hear you, so it was one of those things like, is this what I wanna do? We’re winning. But I didn’t feel like we were number one because of the pressure and the outside drama."

Can somebody please make the playoffs and win a little?