Perry, too, urged attendees — though RSVPs were required, the line was hundreds deep to get entry bracelets — to not only vote themselves, but contact friends and loved ones to ensure they get to the polls on Tuesday.

“It’s OK to have fun and change the world, right?” said Perry before launching into a mini-concert that started with her song “Roar” and ended with her anthemic “Firework.”

“If you’ve got children, their children will be affected by this election on Tuesday,” she continued. “Hillary knows we’re stronger together. We are.”

If anything, the concert felt like a pre-emptive, celebratory sigh of relief, and escape from the sour nature of a presidential campaign that’s pitted Clinton against Donald Trump and friends against friends.

In the concession line, there was talk about a supporter who drove from Ohio, arrived at 6 a.m. and was first in line when the gates opened at 5:30 p.m.

“It’s OK to have fun and change the world, right?” — Katy Perry

The event drew the requisite protesters including Howard Caplan who, as PhillyVoice noted two weeks ago, stands on Roosevelt Boulevard with a “Hillary 4 Prison” sign.

“Secret Service wouldn’t let me enter,” he later shared of the invite-only event. “No reason given. I argued till I thought I was about to get hurt.”

The event also attracted a Westboro-esque protester who caught the attention of Tara Anthony, a Hillary supporter from Allentown, Pa. 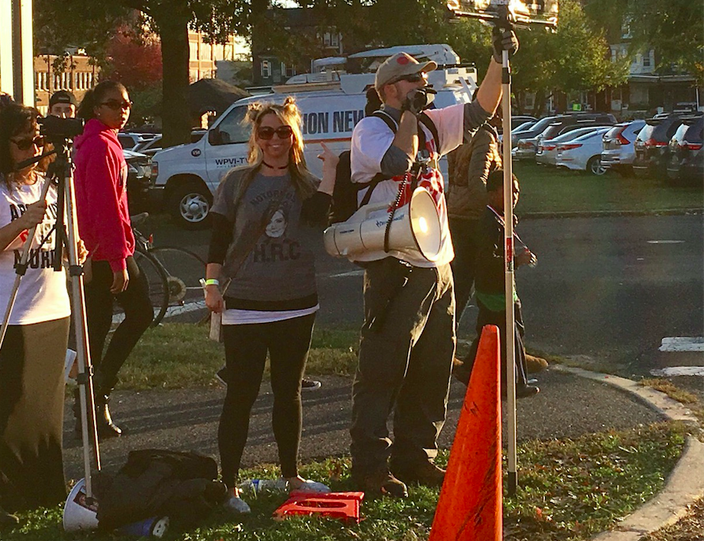 Tara Anthony, a Hillary Clinton supporter from Allentown Pa., had a run-in with a protestor outside a Mann Center rally headlined by Katy Perry on Saturday, November 5, 2016.

“I took a picture with him, but he didn’t realize I was giving him the finger,” she said. “When I put my arm around him, his wife wasn’t very happy. Police got worried at that point.”

A cavalcade of elected officials and entertainers took the stage just after 7:30 p.m. to vouch for Clinton, and urge people to ensure voter turnout in Philadelphia and the surrounding counties is robust enough that she wins Pennsylvania and the election itself.

“In two days, we can send a message to the entire world that we understand love trumps hate,” he said. “This is all about us, no matter who we are, no matter what we are.”

There was U.S. Rep. Bob Brady, launching into a spoken-word interpretation of “Fight Song,” the Rachel Platten song that’s become something of a Hillary campaign anthem.

“Donald Trump is a bully,” Brady said, “and we’re not going to let him bully us.”

U.S. Sen. Cory Booker of New Jersey also rallied the crowd at what he called “a party with a purpose” before actress Debra Messing took the stage and mentioned she’d traversed the state with former Mayor and Gov. Ed Rendell before embarking on an “awesome” Gayborhood bar crawl.

“I felt like the Pied Piper,” she said before ceding the stage to former U.S. Secretary of State Madeleine Albright and Pennsylvania candidate for U.S. Senator Katie McGinty.

For the former, both adults and children jumped up and down after Albright was introduced. The latter ripped on both Hillary’s opponent and her own, the incumbent Pennsylvania U.S. Senator Pat Toomey.

“The soul and spirit of this country is on the ballot,” McGinty said of the stakes on Tuesday. “They want us to be shaken into submission. We’ll be shaken into action.”

TV producer and author Shonda Rhimes then welcomed Clinton out onto the stage, where she’d speak for about 10 minutes about the importance of voter turnout and noting that residents in other states have already started voting via early ballot.

“My longtime friend, Congressman Bob Brady, knows that all the campaigning in the world doesn’t mean anything if people don’t vote,” she said.

And then, knowing full well that she’ll return to Philadelphia for her last event of the campaign on Monday on Independence Mall with President Barack Obama and First Lady Michelle Obama, Clinton ceded the stage to Perry, who performed a five-song set intermingled with political messages and voter-turnout pep talks.