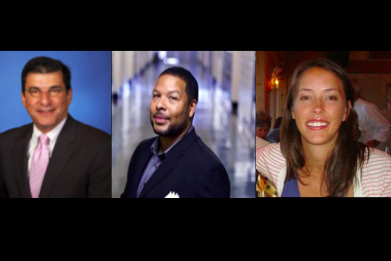 Closing out a week in which the city finally learned (wink, nudge) that Richard Ross would be its next police commissioner, Philadelphia Mayor-Elect Jim Kenney will host a City Hall press conference introducing four members of his administration-to-be.

Though Kenney, a city councilman of 23 years who ran away with the low-turnout mayoral primary and general election, will not be sworn in until Jan. 4, he's spent months formulating ideas about who would surround him in high-ranking administration positions.

The introductory press conference is scheduled for 1:30 p.m. at City Hall.

For managing director, he tapped Mike DiBerardinis, who served as deputy mayor for environmental and community resources and commissioner of parks and recreation. DiBerardinis' appointment was an open secret in political circles in recent weeks.

He will take over a job currently held by Rich Negrin.

According to a press release from the Kenney camp:

DiBerardinis has served in top administrative posts for two Philadelphia city mayors as well as the Secretary of Conservation and Natural Resources under Governor Rendell, where he oversaw 3,000 employees. DiBerardinis currently works as Deputy Mayor for Environmental and Community Resources and Commissioner of Parks and Recreation. DiBerardinis has also served as Executive Director of the Campaign for Working Families, a University of Pennsylvania program which increased access to public benefits for eligible families and as the Vice President of Programs for the William Penn Foundation, where he administered the $60 million annual grant-making programs. He was also the Chief of Staff for Congressman Thomas Foglietta from 1986 to 1991.

Picking up for Mayor Michael Nutter's chief education officer, Dr. Lori Shorr, will be Otis Hackney, whose professional educational roots trace back to the since-closed Germantown High School, where he taught mathematics.

Two other appointments that will be formally announced are Debbie Mahler, who will serve as deputy mayor of intergovernmental affairs, and Jane Slusser, who will be Kenney's chief-of-staff.

Most recently, both worked on Kenney's campaign.

The Deputy Mayor of Intergovernmental Affairs will be the Mayor's chief liaison to City Council as well as state and federal governments. Mahler served as Senior Advisor on Mayor-elect Jim Kenney's successful bid for mayor and as Kenney's chief of staff on Philadelphia City Council for nearly twenty years. A native Philadelphian and former teacher, Mahler has served on numerous statewide and municipal campaigns, including Democratic presidential candidate John Kerry's Pennsylvania Operation.

Jane Slusser will serve as Chief of Staff in the Kenney administration. Most recently, Slusser worked as the campaign manager on Jim Kenney's successful bid for mayor and as Organizing Director at Equality Pennsylvania. Previously, she led Human Rights Campaign's Americans for Workplace Opportunity statewide campaign in Pennsylvania and, in 2008 and 2012, Slusser worked on President Obama's election and re-election campaigns in South Philadelphia and Northeastern PA. In 2013, Slusser served as Associate Director of the National Day of Service for President Obama's Inauguration. A graduate of Barnard College, Slusser also helped to launch social enterprise start-up, Catchafire, where she was Vice President.