Kevin Cooney: Crowd limits disappeared at CBP — and so did Phillies fans

Despite the ballpark being fully open to fans this weekend, it was only about a third full. It could be another lonely summer in South Philly. 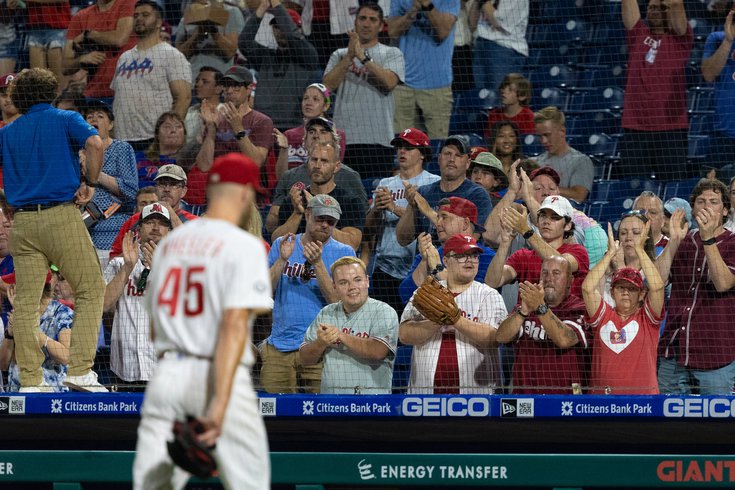 Even a marquee matchup between Zack Wheeler and Max Scherzer barely cracked the 15,000 mark on Friday night.

At the end of a long and hot Sunday afternoon, Joe Girardi sat up against his Zoom background and looked completely exhausted. For four and a half hours, the Phillies and Nationals played something that loosely resembled Major League Baseball – and not the good kind, either. The redeeming factor for the Phillies manager was this: his team won and took two of three against a Nationals squad that hardly resembles the 2019 World Series champions.

And yet, Girardi managed to draw a chuckle when the topic of the first weekend of 100 percent capacity at Citizens Bank Park was brought up.

“After last year, it would be nice to have one person in the stands,” Girardi said.

None of the crowds at Phillies-Nationals challenged standing-room-only standards — or even 50 percent standards. Two games in the 15,000 range with Saturday barely cracking 16,000. To be honest, there were times in April and May — when the seating caps were supposedly in the 8,000 to 10,000 range — where the ballpark was more alive and felt more filled.

“I love the people that we had in this stands,” Girardi said afterwards. “Obviously, when you play better, more people will come out. But our country has been through a lot and people have been through a lot. So I’m appreciative of everyone that came out.”

Yes, there are a lot of valid reasons that people in the Phillies offices would likely give you for the box office sag this first big-crowd weekend of the season. Friday’s torrential thunderstorm could have swayed those on the fence to stay home and skip Zack Wheeler vs. Max Scherzer. Saturday and Sunday became tropically hot and humid, although that’s typical in June. The first weekend in June is typically a graduation weekend for families with those in high school. The capacity cap was really only lifted a week beforehand instead of June 11. And the Nationals are not exactly a hot draw.

If you are sitting in the front office, you have to hope that’s the reason. Because the other reason is much more alarming: the fan base has already turned this team off before Father’s Day arrives.

Realmuto is one who doesn’t have to worry about convincing the fans. There’s a different look towards him, Bryce Harper or Wheeler right now. All three of those players made the conscious decision to come here. And for the most part, they have played to the level of the contracts they were given.

Still, it is a tough product to watch right now. People in this town know when a team has a ceiling and there’s a clear definition that this Phillies house is likely capped short of legitimate contention. There are not a lot of warm and fuzzy feelings about this team among the general fan base. That doesn’t mean they are bad guys – nobody can honestly say that about a team with Andrew McCutchen and Rhys Hoskins — but it's just not people you feel strongly about and would drop good amounts of cash to go see.

And yet, the Phillies problem isn’t unique. Major League Baseball has become a tough watch and needs to make some radical adjustments to its marketing plan and to the nature of the game itself. There’s not enough action and far too many strikeouts. Add in a poor national television presentation by one of its major rights holders — I’m looking at you, ESPN — and excessive analytics that make a fan feel like he or she is overwrought with numbers they aren’t quite familiar with.

That goes well beyond just the standard length of game argument. Throughout the history of the game, four and five hour games are not uncommon. There was a homestand in 1993 where the Phillies played until 4:40 a.m. in a rain-delayed doubleheader against the Padres, then followed that with a 20-inning marathon against the Dodgers roughly a week later. If it’s compelling theater, people will watch it. If it feels like slop, they will seek an alternative. And far too often, the product that Major League Baseball has been selling over the past few years has felt diminished.

It should be noted that next weekend will bring the Yankees to town and a quick glimpse on Monday morning at the ticket map on Phillies.com had tickets available, but certainly not plentiful. That was the original reopening weekend and it would be surprising if those games didn’t draw 30,000 plus.

Realmuto is right in that the fans will return when the team starts winning. Ten years of playoff absence takes its toll. The ballpark is always a lot cooler place to be when its resident club is 10 over .500 and not three under it.

But it is also fair to wonder if when the Yankees leave town and the most attractive weekend series on the remaining schedule is the Padres on 4th of July weekend — a traditional poor seller with family vacations scheduled — if Citizens Bank Park could feel awfully lonely the rest of this summer.