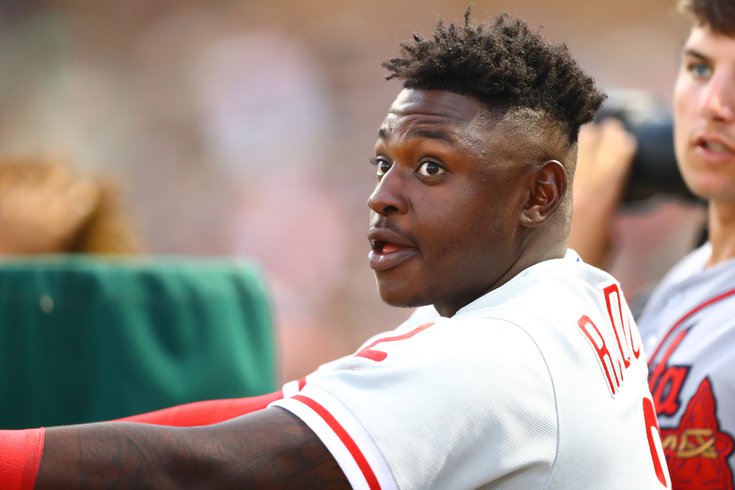 Will the Phillies finally get some real contributions from a first round pick?

The Phillies are being tested — in more ways than one right now — and are really desperate for depth.

Whether that depth will come in the form of a prospect breaking through, or a prospect bring flipped for a big league asset, remains to be seen.  You can be sure that many of the players below will become monumentally important to the future of the Phillies franchise in one way or another sometime soon.

Which is why, as we do every few weeks, we are checking in on the Phillies' top prospects. Who is hot right now? Who is struggling? Are any of the team's recent first round picks nearing a promotion or big league appearance?

(The prospect rankings are based on FanGraph's preseason top 41)

He's a former first round pick (2015) and possibly a late bloomer. Randolph was named the Triple-A player of the week last week, mashing the ball to the tune of a .591 average with three home runs, nine RBI and eight runs scored. At 23, he's still pretty young and may yet develop into a corner outfield talent to replace Andrew McCutchen, should the veteran depart next offseason. He's hitting .356 through 17 games this season, and if he keeps it up, he'll be in South Philly in no time.

Don't look now, but the Phillies' shortstop of the future is breaking through in New Jersey and could find himself on a fast track to the majors. Stott was Philly's first round pick two drafts ago and is 23 years old. He is slashing .274/458/.516 right now, numbers that would be All-Star caliber in the majors. He has four homers, eight RBI and 21 walks in 19 games and could be in line for a promotion sometime soon.

Medina seems to be a player whose name is in and out of top prospect lists. As he pitches in his age 24 season, many are wondering whether he will ever really break through. The right-handed Dominican is a perfect 3-0 so far in Triple-A this year and went five scoreless innings in his most recent start.

The Phillies top draft pick from 2020 has pitched four times in Single-A, and has improved each time. After allowing three runs, then two, and then one, the 19-year-old pitched three shutout, one-hit innings in his most recent appearance.

Hardcore Phillies fans know Falter, 24, as a minor leaguer who pitched two not-so-great innings in his MLB debut in April and hasn't been heard from since. But he's found his groove in Triple-A, boasting a minuscule 0.63 ERA over his last three starts (totaling 14.2 innings). Overall, he has a 2.41 ERA over four total starts and 26 strikeouts over 18.2 innings.

It's hard to continue ignoring Williams, who in his age 24 season is showing he can decimate minor league pitching. The former third round pick is hitting .352 this year and had a recent four-game stretch that saw him collect exactly two hits per game from May 19 to 23.

If the Phillies need some relief help as the season drags on, the 26-year-old Jones has to be their next call. While old for a prospect, he still ranks as the No. 23 man in the farm system and he's been absolutely lights out through 9.1 innings out of the bullpen for the Iron Pigs. He's allowed just four hits and has a 1.93 ERA.

If Jones gets called up, the next man to follow should be Llovera. Another older arm, at 25, Llovera made an MLB appearance last season and has an ERA of 1.00 through nine innings in Triple-A.

Oh Mickey Moniak. The Phils' 2016 first overall pick was terrible in the majors during a brief opportunity earlier this spring, given the chance to earn the starting CF job (which was later won by Odubel Herrera). Moniak's slump continued into Triple-A, but he's finding his footing slowly, with a four game hit streak. Still, his .175 batting average in the month of May against minor league pitching is not a good sign.

That Morales is young, just 21, is mitigation against his putrid performance so far in Double-A Reading. One of the Phils' top pitching prospects, Morales has an ERA of 18.69 through four starts and that is not a typo. He's only logged 8.2 innings in those starts and has allowed a whopping 20 runs, 18 of them earned. The learning curve from Single to Double-A can be sharp sometimes.

Gamboa is an extremely talented defensive player — something the Phillies badly need right now — but his bat continues to lag behind in Double-A. He's hitting right on the Mendoza line so far, at .200 through 16 games, though he does have three home runs.

Garcia is one of the Phillies top 15 prospects but at age 20, he can be forgiven for struggling a bit. The year off in 2020 no doubt hurt the development of the international signee, who hit .369 in Rookie Ball three years ago but has hit worse and worse as he's been promoted. Currently, the slender shortstop is hitting .208 down in Florida.

Ortiz is a talented prospect and another entry to the Phillies through their Dominican Republic pipeline. However, Ortiz hasn't handled the bat very well after a hot start in Clearwater — his batting average is all the way down to .230. At 22, many hoped Ortiz could make the leap to Double-A this summer with a strong showing.