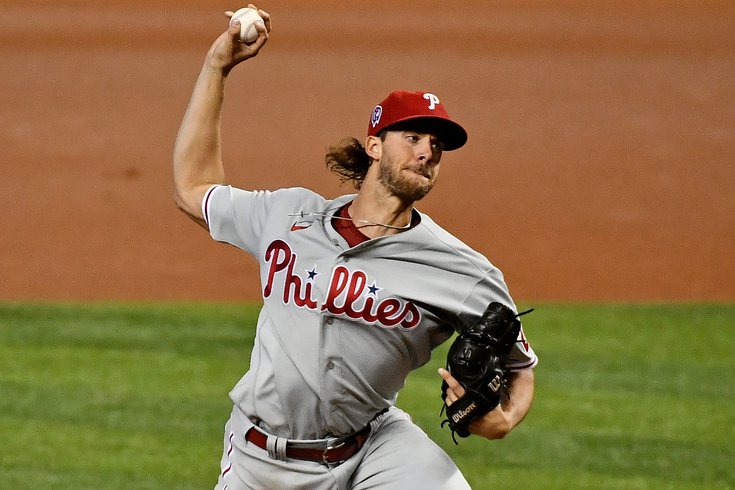 Aaron Nola may need to win three games, all by himself, to get the Phillies in the postseason.

When Zack Wheeler geared back one final time on Thursday afternoon and forced Daniel Vogelbach to harmlessly pop up foul to Rhys Hoskins at first base, you could have been forgiven if you thought you had just watched the 2011 Phillies instead of the 2021 variety.

Wheeler’s gas tank was just about empty at that moment when he threw his 118th pitch of the afternoon during a dominant 2-0, three-hitter that finished Philadelphia’s sweep of the Milwaukee Brewers.

“When your pitch count is up and you are in the last inning, it makes you a little nervous out there I guess,” Wheeler said in his post-game Zoom with reporters. “But you have confidence in yourself and you just have to make your pitches.”

There are not a lot of things right now that make you confident in the Phillies ending a 10 year playoff drought. An inconsistent lineup, a shaky bullpen and a heralded manager who has done some very strange things are all things that can derail this season in a hurry.

But the one salvation here could be Wheeler, Aaron Nola and Zach Eflin at the top of the starting rotation and the best group the franchise has had since Roy Halladay, Cliff Lee and Cole Hamels caused the town to go ga-ga a decade ago.

Those three starters are the one thing they can hang their hat on as they head to Atlanta, Washington and Toronto/Dunedin for a pretty daunting road trip this week. They are capable of making this a very interesting summer in this city.

Wheeler, Nola and Eflin have thrown 130 innings in 20 starts this season, allowing 44 earned runs (a 3.05 ERA). The combined Walks/Hits Per Innings Pitched is 1.03 – an incredibly good number this deep into the season. The three combined for a 7-4 overall record. The Phillies in their starts are 11-9.

Just for giggles, the 2011 top three of Halladay, Lee and Hamels were 11-5 in their first 20 starts, threw 141 1/3 innings, allowed 44 earned runs (a 2.80 ERA), and threw for a 1.04 WHIP in that timeframe. (Certainly, this doesn’t necessarily mean that the current guys are anything close to what you saw from that trip for an entire season. It is meant to give you a perspective on what they’ve been to this point- which is pretty damn good.)

Since Hamels' departure at the trade deadline in 2015 officially ended the era of “The Big Four”, the Phillies search for starting pitching has waddled in mediocrity for the most part. Nola has been a consistent presence and has been solid for the most part. (The questions on whether he’s a true “Ace” of a playoff bound staff can only be answered ultimately by his performance in August and September, where he has struggled.) Eflin has been in and out during this period, but didn’t really establish himself as an every turn starter until Chris Young got his filthy paws and “never mind what has worked — throw high in the zone” clutches off him after the 2019 season.

Other than that, it has been a steady stream of failed prospects and journeyman starters. Thinking back to the days when Aaron Harang, Jeremy Hellickson and Jerome Williams were actually pitchers in this starting rotation should cause you to sit up in your bed at night and scream in terror. (Yes, Vince Velasquez still would be in that group for the moment.)

While there were certainly other aspects of this team that would be considered mediocre over that timeframe – well, actually almost every other aspect of this team could wear that label from 2012 to 2020 – starting pitching always has the biggest mental block to it. When you don’t have quality starting pitching, the starting lineup you have is forced to think it has to put double figures in runs up every night. The defense presses to make the exemplary play and ends up botching the routine. The bullpen gets taxed and wears down before the 4th of July fireworks.

While this starting rotation certainly has holes in it — Matt Moore, Chase Anderson and Velasquez in the final two spots are not pretty options — the top three give the Phillies a deodorant that should be able to prevent long losing streaks and keep them in the middle of a pretty ordinary division and National League race for the long haul – even with a team filled with flaws.

• A Wall Street Journal report this week indicated that NBC/Comcast may be interested in either selling all of its regional sports networks or placing them on its streaming service Peacock in the not too distant future.

This would be a huge seismic thing for everyone in Philadelphia, but particularly baseball fans who tend to skew older than fans of the NBA and NHL and would likely not be as interested in watching their games on streaming devices like IPads, laptops and phones. We’ve all seen the outrage when Phillies games are on YouTube or Facebook Watch once or twice a season. Imagine that over 162 games.

The Phillies have a reported 25 percent share in NBC Sports Philadelphia and are in the middle of a 25 year contract that was signed in 2014 that was worth $2.5 billion. If the outlet is sold, it is possible that there would be little change to the product you watch. FOX Sports Regional networks rebranded itself as Bally Sports in recent weeks after being sold to Sinclair, a huge broadcast conglomerate. The product appeared to change little except for some new graphics.

However, if Comcast decides to simply put it on streaming, it is possible that the club could push back and seek either to buy the entire channel itself with a partner or force a separation that could end up with another sports television outlet in the market. While streaming is the wave of the future and has been elevated during the pandemic in a lot of ways, it doesn’t feel like something that an existing team would be all that interested in being the test case for.

The key to that could be finding a way to make a new channel work with the 76ers, who are the other entity not owned by Comcast who shares the airways. (The Flyers are under the Comcast Spectacor umbrella.) The 76ers contract with Comcast is scheduled to end in 2029 and there was talk late last year that Josh Harris’ interest in buying the Mets was based on the idea that he would do a RSN with the Sixers and the Devils – what a strange brew that would have been.

This is all speculation at this point, but it is a storyline to keep an eye on as the NBCSP situation plays out.

And if you don’t think that could happen, just remember that this weekend’s series is not on PRISM.

• Speaking of broadcasts, I know that Jimmy Rollins is a studio analyst for TBS during the playoffs. But Major League Baseball is missing out not having him in the booth on a regular basis for its national package with either FOX, TBS or ESPN. What we saw last weekend when Rollins teamed up with Phillies broadcasters Tom McCarthy and Ruben Amaro Jr. on Friday and Saturday night was something that the game desperately needs: a voice that can be humorous, tell great stories without self-glorifying and be as connected to the modern player as anyone. That was never proved more true when compared to Alex Rodriguez’s performance on Sunday Night Baseball later that weekend.

• Finally, here is this inspirational thought of the week: If you think you may be bad at your job, take solace that Angel Hernandez is worse at his.