Plus, Jean Segura has a setback in rehab start and an Archie Bradley update 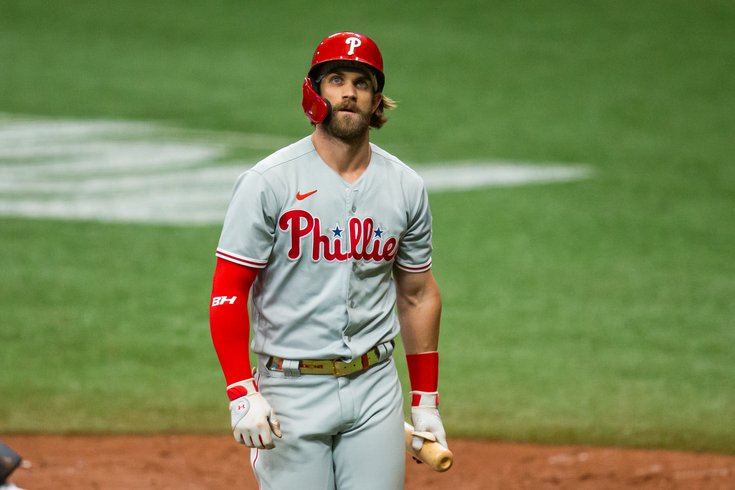 The Phillies have not been to the playoffs since 2011.

After returning, remarkably, from being hit in the face by a 97 mph fastball last week, Harper tweaked his wrist during an at bat during his return and though he was able to finish that particular game, he hasn't returned to the lineup since.

Finding his name not in the lineup for Thursday's matinee against the Brewers, is it time to be concerned for Harpers ailment? Despite having missed four games in a row now, the Phillies have yet to add him to the injured list — a move that would give the Phils the ability to replace him on the roster, but require him to miss at least 10 games in total.

By not adding him to the IL, the Phils seem to be implying he is nearing a return, and it couldn't come soon enough.

Through the first 31 games of the season, outfielders not named Harper have combined to hit a putrid .160. Harper all by himself has hit .317 with six homers in the 24 games he appeared in and was looking like an MVP candidate. If he's going to miss anywhere near 10 games, the IL makes sense, as the Phillies could certainly use some extra options to help produce in his absence.

Or maybe he's on track to be back Friday. We'll find out.

As for the rest of the Phillies injured players, here's a look at their current status and potential earliest return dates:

Segura was nearing his return and in his second rehab start in Triple-A, he got hit with a wild pitch. It's not known if that will set him back again. This possible delay will keep Nick Maton at second for a little longer before the team considers trying him in center.

Torreyes also has been in some rehab starts and could be back if the Phillies need him soon.

As for top reliever (or at least top paid reliever) Bradley, who was expected to be back by now, it sounds like he is expecting to make his return after the Phillies next road trip, as he spoke to the media Thursday morning. Illness, he said, set him back but he should be pitching in Lehigh Valley sometime soon.

Joyce, Romero and Quinn are all recent additions to the injured list.