Kevin Cooney: For Phillies, time to act (and fill big roster holes) is now, not the trade deadline 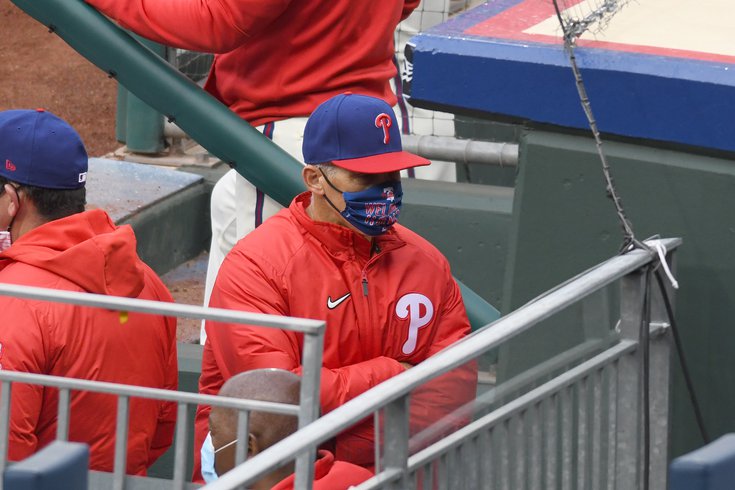 PHILADELPHIA, PA - APRIL 17: Manager Joe Girardi of the Philadelphia Phillies stands in the dugout during the game against the St. Louis Cardinals on April 17, 2021 at Citizens Bank Park in Philadelphia.

The standings says that we are 25 games into the new season – an amount of time that is a few kernals of sand slip through the hourglass.

But if you look at the actual baseball calendar, we’re almost 2 ½ months into this grind – one that began on the fields of Clearwater with a ton of open auditions in various spots for the Phillies and a few glaring issues.

And what should really concern Dave Dombrowski, Sam Fuld and John Middleton to this point are that the same problems that the Phils wondered about along the Gulf Coast have not come close to being settled.

Can’t run the bases? That’s a given.

Closer and bullpen concerns? Maybe not as bad as last season, but certainly not great.

Not everything with this team was going to get patched together in the uncertain winter where financial resources were uncertain and questions over the length of a season along with playoff structure were certainly not close to set.

That doesn’t mean, however, that waiting to the trade deadline should be the modus operandi for this Phillies team. While not every hole can be filled at this moment, Dombrowski and Fuld have to start by throwing some spackle and paint on the most glaring ones.

One of the very fortunate things that this team has going for it is the fact that nobody has gotten hot yet. As we said last week, the National League East has not lived up to its pre-season hype and that’s one reason why Philadelphia is not in trouble… yet.

But that’s not going to last forever. And that’s why the centerfield situation can only go another couple of weeks this way. None of the in-house options are viable and the use of Odubel Herrera this week in St. Louis confirms that that.

It is difficult to make a trade in May and it doesn’t always end pretty. Dombrowski’s most significant May trade took place in 1989 when he was with the Expos, trading Randy Johnson and two other players for Mark Langston of the Mariners. (The good news is that there’s likely not a future Hall of Famer in the Phillies farm system.)

However, there should be a sense of desperation. When you haven’t made the playoffs in 10 years, there has to be. And when you have a core talent group that is good enough to get there, it is vital that management make every effort to fill the pieces around that group in a hurry.

The time is now to make a move. It is needed for this team’s survival.

• If you want a positive out of this week in Denver and St. Louis, it was that the Phillies showed the potential to have a certain amount of spunk in them. While they haven’t been able to build off wins, the idea that losses haven’t sent them into huge tailspins is something that is encouraging from its approach. The way that the club responded on Wednesday night after Bryce Harper was hit in the face and Didi Gregorius drilled in the ribs shows that there is a level of competitiveness that exists. That may sound like a minor thing, but it really isn’t. The attitude isn’t what is lacking — it’s talent. It’s easier to find teams with talent than it is to develop the right attitude. So again, this is probably the best thing you can take out of the road trip.

• There’s been a lot of criticism of Joe Girardi’s managerial moves in certain spots. Thursday’s loss to the Cardinals was highlighted by an intentional walk to Edmundo Sosa that set up Matt Carpenter’s pinch-hit, three-run homer off Aaron Nola. Kudos to Girardi for shouldering the blame on that move afterwards. However, some of the criticism fails to look at the fact that the manager really doesn’t have a lot of great options with a bench that’ weak, a roster loaded with holes.

• A reminder that the minor league season will begin on Tuesday night after a layoff of over 600 days. Lehigh Valley, Reading and Lakewood will all be home to kick off the slate for the season. One thing that will be interesting is to see how the layoff will impact some of the Phillies top prospects, some of whom were not in the picture last year at the Alternate Site. Chief among them is Bryson Stott, who will begin with High A Jersey Shore (formerly Lakewood.) Stott could be a factor here as soon as next spring if the designated hitter comes in and Gregorius could end up sliding into that spot for the last year of his contract. This is a season he has to prove that.

The next two weeks are huge for the Phillies, who host the Mets for three this weekend (without Jacob deGrom on the probable pitchers list) and NL Central leading Brewers on Monday for four games. After that, it’s a trip to Atlanta for three games as the kickoff of a nine game road trip that will also include games against the Nationals and Blue Jays (in Dunedin).