Kevin Cooney: The Phillies haven't been great, but the NL East won't be either 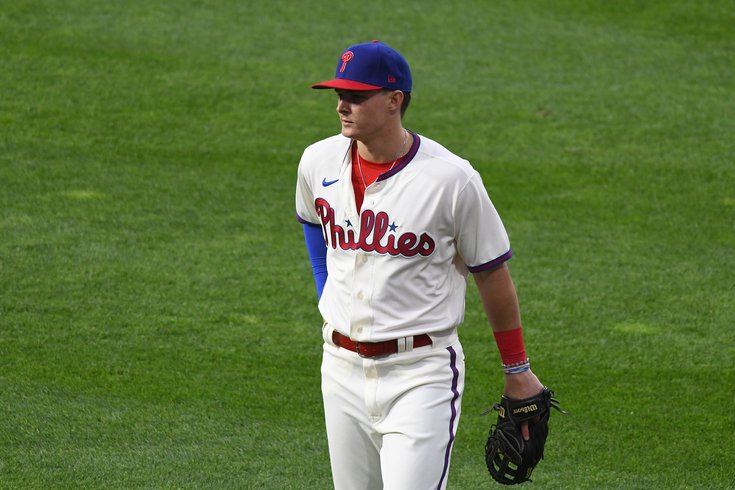 It is difficult to imagine this after what you just saw this week — a bullpen that gave you nightmares of the worst moments of 2020, injuries and COVID-19 test cases popping up in the clubhouse, ridiculously poor fielding and some baffling managerial decisions not made by a man named Gabe Kapler — but there is a ray of hope for the 2021 Phillies.

It comes in the comfort of their enemies' issues.

When everyone evaluated the National League East as some sort of behemoth in the offseason filled with five teams that had playoff aspirations, they seemed to discount one important factor. All five of those teams had remarkable flaws – all of which have appeared to pop up early in the season.

Take a look around and wallow in the mediocrity.

• The Braves starting rotation is a mess with Mike Fried and Drew Smyly on the injured list and Mike Soroka’s situation not looking promising. Atlanta entered play on Friday with a 4.93 ERA among its starting pitchers – 24th in the Majors. The lineup also suffered a blow this week with Ronald Acuna Jr. going down with an abdominal strain. Acuna wasn’t put on the IL, but those things can linger with a player all season. Acuna was so blistering when he was sidelined on Sunday night that any amount of inaction hurts Atlanta.

• The Mets have been great in their starting pitching to this point with a 2.95 ERA so far. There are a few discouraging signs for New York, however. Mets relievers through the first three weeks of the season are throwing to a 4.61 ERA – fourth worst in the NL. Francisco Lindor has struggled at the plate, although he hit his first homer of the year on Wednesday night in Chicago. And with a steady diet of COVID-19 and weather postponements, the Mets schedule already has a backlogged feel to it.

• The Nationals were the team most likely to fall off the cliff in the division and the early indications are making that possibility far more likely. Stephen Strasburg is on the injured list. Patrick Corbin’s first three starts have led to an ERA of 10.95. Juan Soto is on the injured list with a sore left shoulder. And with free agency looming, there’s already some scuttlebutt that the Nationals could be forced to listen to offers for Max Scherzer by the middle of the summer. Yes, Washington rallied from 15 under .500 in May to win the 2019 World Series. Going back to that well is not recommended.

• The only team in the National League East with a positive run differential heading into Thursday? That’s the Miami Marlins, who are 8-10 but a +1 on that metric. (The Phillies are minus-6 heading to Colorado for the weekend.) The Marlins may actually be playing the best of anyone to this point — 6-4 in the last 10 — but the issues for Miami could be attrition and a lack of depth as the season goes along.

While the Phillies flaws are pretty clear — that defense is a trainwreck — they do have some valuable assets. Being able to bunch Bryce Harper and JT Realmuto together in the middle of the order should allow them to have stability there. While Aaron Nola and Zack Wheeler have each had one clunker start in there, those two and Zach Eflin form a solid Top 3 in the rotation. And there are moves that eventually could be made by Dave Dombrowski and Sam Fuld that will add to the overall roster that is too weak in some spots.

Perhaps more importantly, the Phillies are going to probably land in that 80- to 85-win range. If the NL East was filled with super teams, that would be a problem. Except that it isn’t. In fact, the entire National League with the exception of the Dodgers and Padres is more watered down than a Bud Light. The Central has two legit contenders in Milwaukee and St. Louis, but that winner may not get to 90 and the runner-up likely could be in that same 85-win range. And while Kapler’s Giants appear decent on paper right now, it is tough to see that lineup holding up in the long term.

That’s why April can be such a tough month to get your hands around. The sample sizes are so small that it can cause unnecessary panic.

Are the Phillies flawed? Yes. But no worse than anyone else in their own division or league. And in that sense, a deep breath of thanks should be noted.

Sympathy for the Mick

When Mickey Moniak was drafted with the tag “1-1” on that June night back in 2016, it was probably one of the best moments of his teenage life.

And that’s why it is almost impossible to feel some incredible sympathy through the criticism that he has received in the years that have followed that moment.

Nobody — at least publicly — has questioned Moniak’s desire to become a player in the major leagues. He has grinded his way into the majors despite a skill set that — at times — appears to scream “reserve outfielder.”

Moniak didn’t draft himself with the top overall pick — that should forever be the mark upon Matt Klentak’s administration, who tried to get too cute and went cheaper for a high school kid instead of the more proven college player Kyle Lewis (who was the American League Rookie of the Year in 2020 for the Mariners after falling to 11 in that draft) or starting pitcher Ian Anderson, who has a huge upside potential and who was taken as a high school pitcher by Atlanta at No. 4.

The original plan was to draft Moniak, hope he would come in at a lower slot number than an established college player and spend more at the top of the second round on pitcher Kevin Gowdy — a top prospect who had already undergone Tommy John surgery and who spent the last minor league season (2019) in Lakewood with an 0-6 record and a 4.68 ERA.

The plan flopped and the responsibility for that doesn’t fall on the player, but the management who made it. Add in the uncertainty about Adam Haseley, who was picked eighth in 2017 out of Virginia and has been otherwise underwhelming in his MLB tenure, and those are two Top 10 selections that will fall on the reputations of those that made the picks. It shouldn’t scar the actual players themselves.

• There could be a roster crunch coming for the Phillies soon and that could mean some bad news for some who could be on the verge of packing their bags. Roman Quinn and Vince Velasquez are two that immediately spring to mind. Quinn is vulnerable if Scott Kingery shows any signs of life as a utility guy who could end up teaming with Moniak in center for the time being. Quinn is out of options, so a designated for assignment would appear to be possible. Velasquez is certainly less likely to get tossed aside — pitchers have a little more value than light-hitting reserve outfielders — but his start on Friday night could be among the last shots for him to stick with the Phillies.

• Bryce Harper has a career average in April of .303 with an OPS of 1.033 in the month. His numbers to this point have been incredible. The key for Harper, however, is steady production. The outfielder dips significantly in May (.253 average, .902 OPS), June (.275 average, .838 OPS) and July (.256, .831 OPS). If he performs higher than those numbers over the next three months, the Phillies will be in great shape and Harper will be smack dab in the MVP race by mid-summer.

• In the future, lineup construction should be a major part of the discussion for the Phillies in offseasons. Getting a true leadoff hitter should be priority No. 1. Nothing against Andrew McCutchen — in his prime, he was effective in that role — but not having a better setup now could really haunt this team down the road.

Every image of Denver this month appears to have contained snow, flurries, sleet or guys wearing the cold weather gear to their eyebrows. The good news for the Phillies is that temperatures are supposed to warm up and towards the high 70s on Sunday. The bad news? Well, Velasquez will start Game 1 on Friday.

After that, it’s a trip to St. Louis for a final three games against the Cardinals in the regular season. That may be a good thing since the Redbirds seem unable to gain any traction right now and are tied with the Pirates — yuck — at the bottom of the NL Central. That being said, St. Louis still has a really good lineup core with Nolan Arenado, Paul Goldschmidt and Yadier Molina. At some point, they’ll get hot and likely grab the lead in the Central. For the Phillies, timing in this case may be very fortunate.