The organization has produced just one homegrown All-Star outfielder since Jimmy Carter was in the White House. 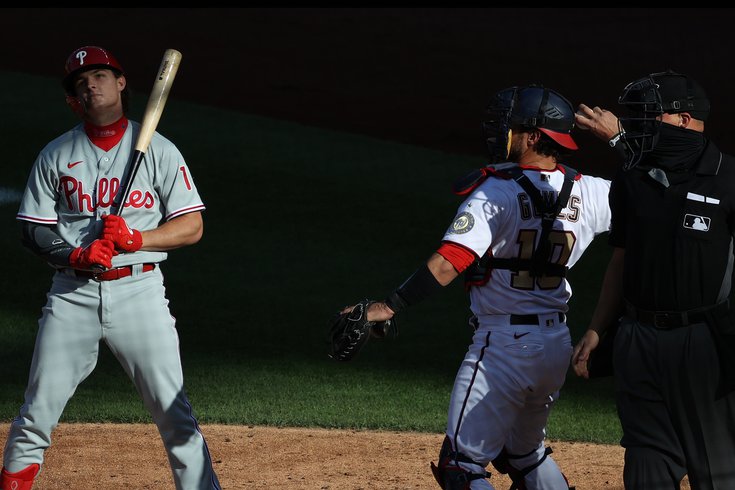 To understand the present and the fact that five guys – four of them from the farm system, one of whom has spent his entire big league career here after being a Rule V guy — could possibly not fill one position of need in centerfield for the 2021 Phillies, you have to take a deep dive into the Phillies All-Star registry on Baseball Reference.

Since Greg Luzinski’s last appearance in the All-Star Game in 1978 — 43 summers ago — Phillies outfielders have made 14 appearances in the Mid-summer Classic.

That means that only one born and bred Phillies draft pick and farm prospect in 43 summers has made the All-Star Game. Yes, that’s right — Domonic Brown’s appearance in 2013 has saved an organizational development shutout since the Carter administration. So what’s the difference if a good player comes from inside or outside the organization? Well, the main reason you should care — and that the Phillies should find a way to dedicate themselves to correcting this issue — is the capital used to patch these holes (especially financially) restricts where other dollars can be spent.

In that same timeframe from 1978, the organization has used 10 picks on players listed as outfielders in the first round of the draft, starting with Jeff Jackson in 1989. (Remember, Pat Burrell was officially designated a third baseman when he was taken out of Miami.) The first eight before Mickey Moniak in 2016 and Adam Haseley in 2017 played a combined total of 49 games for the Phillies. Haseley and Moniak had combined — prior to Wednesday night — for 124 major league games.

In other words, outfield has been a homegrown nightmare. And while the issue can read as just one of a number of flaws in the Phillies system, the idea that Philadelphia hasn’t been able to patch outfield holes without going to outside sources for the better part of 50 years shows that it better be a point of emphasis going forward for this organization with how it approaches draft and development.

That doesn’t really help the 2021 version of this franchise. The move on Wednesday that saw Haseley put on the restricted list for a personal matter with manager Joe Girardi giving no guarantee that he will return this season was surprising, but something was going to have to be done about centerfield sooner rather than later.

Roman Quinn would appear to be the next shoe to drop. They can’t option him, so the question becomes would the Phillies lose Quinn to bring either Scott Kingery – who is working on a swing overhaul — or Herrera up? If the Phillies are really reworking the Kingery swing, it is doubtful they would want to rush him back without him seeing actual game action. Remember that we are still two or three weeks away from Lehigh Valley’s Triple-A season getting underway. Can a swing get refined in practice only for a return to the big leagues?

It appears pretty clear that Philadelphia is trying to avoid bringing Herrera back with all of the potential distractions that would come with his return after a domestic violence suspension in 2019. At some point, however, it may become the option of last resort from in-house candidates before a trade is consummated.

Ultimately, that’s how Dave Dombrowski and company may have to solve the biggest hole that the franchise has immediately. But they should probably look at the bigger trendline that has haunted this organization.

Progress can be good.

Just messing with things for the sake of screwing around with them is brutal.

And so, Major League Baseball’s never-ending quest to tinker with a game that was perfectly fine for 150 years continued this week with the announcement that the second half of the Atlantic League season will be dedicated to moving the pitching mound back a foot to 61 feet, 6 inches.

The idea is that the extra foot – roughly one microblink of an eye — will somehow promote all kinds of offense instead of the endless swing and a miss festival that goes on around American ballparks right now.

The reason that guys are not making contact, however, isn’t because they need that extra quarter-second to see a pitch. It’s because they are loading up on the back foot and swinging for the bleachers even if they are a 5-foot-7 fifth outfielder. That’s because the money goes to the power guys – and everyone wants to make more money.

It’s another dumb idea from the same guys who brought you the man on second in extra innings. One also guesses that more is coming as well.

• If you want one surprising number to this point for the Phillies lineup, it isn’t the lack of power. (That will likely come when the weather warms up.) It is the idea that they are 13th in the National League (out of 15 teams) in walks heading into Wednesday night. So much about what Philadelphia was able to do last year was grind teams down offensively by forcing base on balls. They were third in the NL in 2020 in walks.

• The centerfield question does hide one other factor — how much longer does Girardi go with Andrew McCutchen as the leadoff hitter? McCutchen has seven walks coming into Wednesday night — but that .156 average is not a pretty sight on the card.

• Want the biggest difference (besides locale) in the Phillies between the first week at home and the second week on the road? Their defense at home was exemplary, especially in the infield. On this road trip — not so much. Some of that was Haseley’s lack of a jump in the outfield. But the routine plays are not being made. And this team isn’t good enough to overcome a steady diet of defensive flubs.

The Cardinals and Giants are arriving at Citizens Bank Park next week, breaking a stretch of teams playing in South Philly from the Eastern time zone that dates back to August 18, 2019 (when San Diego earned a 3-2 win.)

St. Louis should be the favorite to win the pretty awful NL Central, even as Milwaukee and Cincinnati have started well. But Nolan Arenado and the Cards should likely separate themselves later in the summer.

And then, it’s Gabe Kapler’s return to South Philadelphia. Given the fact that Kapler was never a popular figure here, it probably won’t be a hearty homecoming for the former Phils manager. The Giants starters, however, have been outstanding – throwing to a 2.89 ERA early in the season. That’s a large reason why San Francisco entered Wednesday at 8-4. Again, it’s still early and the toll of the NL West powers of San Diego and Los Angeles may wear the Giants down. But San Francisco is not a pushover.