What can the Phillies do about their center field problem?

Joe Girardi doesn't think his team needs an upgrade right now, but here are some options for when he does... 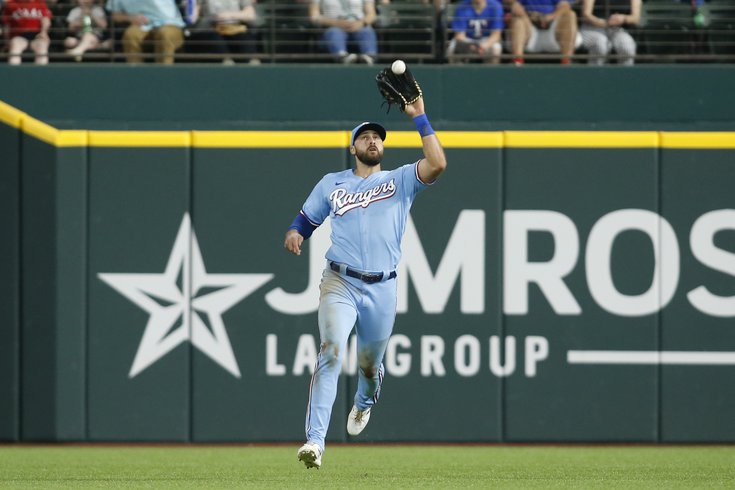 Are the Phillies already thinking about center field options?

It's super duper early. And with just 11 games of baseball from which to judge, complain and contemplate it's probably premature to proclaim that the Phillies centerfield issues are their biggest shortcoming.

After all, in 2020 throwback fashion, the Phillies bullpen was pretty terrible in a double-header loss to the Mets Tuesday, as Hector Neris blew a save in the opener and Spencer Howard walked the Mets' pitcher, eventually allowing a run in a shutout setback in Game 2.

But the Phillies have a black hole in center, and it's not looking like it's going to turn around anytime soon.

Being bad offensively is one thing — Roman Quinn has one hit and nine strikeouts in 10 games while Adam Haseley has a .190 batting average (and same on-base percentage) — but the pair has made a bevy of base-running and fielding blunders as well that have cost the team.

Is it time for a change already? If Quinn and Haseley don't turn it around and fast, the Phillies will really need to consider their options. At least that's what you'd think.

“Our roster is what it is,” manager Joe Girardi said Tuesday. “I still think that we’re doing OK.”

Here are some of the limited options the Phillies have if/when they decide that they are not "doing OK" in center...

Call up the vets

This is the obvious choice right? He's done it before, and has more defensive chops than what is currently in South Philly. But not so fast.

After struggling mightily following a bout of COVID-19 last season, Kingery's lackluster play carried over to spring training 2021, where he was surprisingly sent down to the minors. With the Triple-A season still weeks away from beginning, the Phillies do not feel comfortable making the call.

“Scotty went down to get right, and we don’t feel that Scotty’s ready to come back as of right now,” Girardi said. “There’s been some good at-bats and there’s some other at-bats. He’s used the whole field a little bit more down there. But it’s been OK. We feel like it’s going in the right direction.”

Herrera had a much publicized successful spring but it wasn't enough for him to grab a roster spot. Part of that could be due to his lack of meaningful reps in recent years, and part of it could be his off-the-field issues.

The one-time All-Star was sent down after the spring to get some more at-bats and further get into baseball shape. Would a few weeks of stellar play in Lehigh Valley earn Herrera a chance of big league redemption in May?

The only other outfielder we have not mentioned yet who is on the Phillies' 40-man roster is Mickey Moniak, the team's first overall pick in the 2016 draft who wasn't half bad in spring training this March. Moniak is 22, has played well in the minors and earned a brief shot in the majors at the end of 2022 where he was nothing special.

It seems pretty clear that a solid showing in Triple-A could earn him a starting role in the future (assuming they don't make a big outfield trade), but it sounds like Moniak is the third option as far as call-ups go right now.

Joe Girardi just essentially said that the Phillies don't feel like any of the center field options at Lehigh Valley are ready to be here right now. That likely refers more to Herrera and Kingery, I think they want Moniak to get more seasoning.

The one-time Dodgers star is on an underachieving Cubs team that actually has a lot of depth and is likely to have a fire sale come the summer — selling Peterson along with players like Kris Bryant, Javier Baez and others. Peterson is two years removed from slugging 36 homers, and his power would be a welcome addition to Citizens Bank Park. He has a mutual option for $10 million in 2022, but his contract is technically expiring and he likely could be had for cheap.

Mazara doesn't technically play center, he plays the corner outfield spot and would have to either play out of position in Philly or move someone currently in the outfield to center, but he could be available and should be an intriguing option. Stuck with the lowly Tigers, Mazara was one of the top prospects in baseball five years ago and he burst onto the scene hitting 19 or more homers in four straight years. His last two seasons have been dreadful offensively, and he has a cheap expiring prove-it deal. He's someone with more talent than the options currently in Philadelphia and might be worth a shot.

The Royals are another team that isn't good enough this season and has players worth poaching. They currently have two centerfielders on the roster, one a former top prospect with the Nats who hasn't quite panned out in Taylor, who is off to a fast start this year hitting .333 through 10 games, and Dyson, a veteran speedster who is a good defender and glue guy. Both have expiring deals in Kansas City.

Would Miami trade within the division? They are off to an impressive start at least offensively down in Florida but in a highly competitive division, the Marlins could be in a position to sell sometime soon. And Marte, who has an expiring contract and is hitting .324 to start the year, is a desirable candidate to play center for Philadelphia. He has two Gold Gloves and has played all over the outfield during his career, boasting a .287 career average.

Gallo is the most intriguing option here. He is under contract for 2022 with one year of arbitration eligibility left. He was on the trade block last year, according to The Athletic's Ken Rosenthal, and with the Rangers looking to get young and rebuild he could be their most desirable asset to buying teams. He can play center, as well as the corner outfield spots and first base, and he has an incredible amount of power — he hit 40 homers in back to back seasons in 2017 and 2018. He is an All-Star and Gold Glover who has struggled over the last two years with the bat a bit. Could he benefit from a change of scenery?