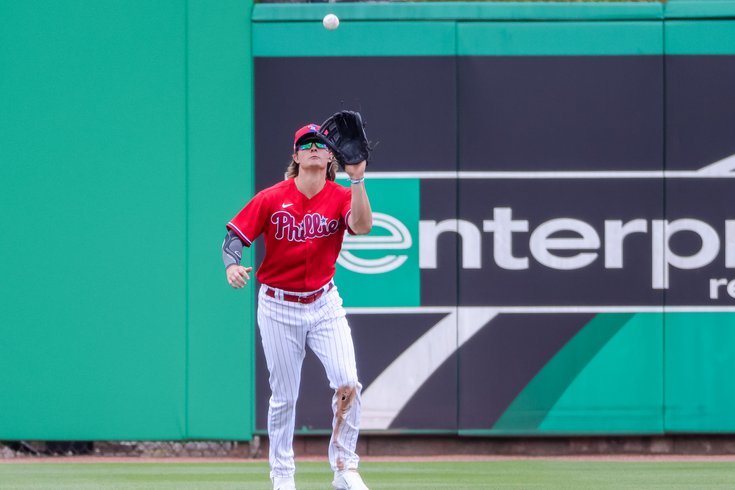 Mickey Moniak has been called up. Will it be to stay?

Adam Haseley was a first-round pick for the Phillies just four years ago who was decent as a rookie, and was more or less replacement level in 2020. He was looking to bounce back in 2021 and had a relatively solid spring to earn a job in the majors after overcoming a brief injury.

But now, for unknown reasons, the struggling outfielder — who was hitting just .190 so far this season and made a handful of bad decisions in center field this season, but who many expected to have a bright future — has been placed on the restricted list.

Phillies have made the following roster moves: pic.twitter.com/GvGNCmo9zd

The decision is a little confusing and perhaps chilling, as the 25-year-old was not sent down to Triple-A, as many would expect him to have been for poor play. He was placed on the restricted list, which requires the MLB commissioner's approval.

Here's more on the designation from baseball reference:

The Restricted list is a compendium of players who are out of organized baseball but are not free agents. A team can request that a player be placed on the restricted list if that player has left the team without a valid reason, or has announced his intention to retire but is still of an age or level of skill that could allow him to return to professional baseball in the future. In effect, the team states that it retains rights to the player if and when he becomes active again. The list is also used to place a player who is unavailable to play for non-baseball reasons, such as personal issues or trouble with the law.

A player on the restricted list cannot be signed by another team unless compensation is paid to the team who placed him on the list.  [Baseball Reference]

That is pretty serious stuff. But it seems like the team is intent on keeping it personal, as Joe Girardi did not provide and solid answers when he spoke to the media shortly after the news broke.

"I am not going to get into it," the manager said, when asked what Haseley's particular issues were. "Like I said, it's personal reasons. We have no timetable. We are all thinking about Adam.

"We had a nice talk today and we all agreed this was the right move for all of us going forward. It's a personal thing, we'll just leave it at that."

There's obviously a lot more to this story that is unknown right now, but what we do know is that Mickey Moniak, who as recently as this morning was expected to be behind both Odubel Herrera and Scott Kingery on the organization's center field depth chart, has been called up for what could be (he hopes) a permanent stay in center.

Moniak was the Phillies' first overall pick in 2016 and in four seasons he has been inconsistent in the minors, failing to ascend as quickly as most would expect a top draft pick to.

In his most recent full season, the 22-year-old left-handed hitter hit .252 with 11 homers and 67 RBI in 119 double-A games back in 2019. He also played well in center and stole 15 bases. With no minor league season in 2020 due to COVID-19, Moniak did get 18 MLB at-bats at the end of the season, collecting just three hits in a very limited showing.

"We liked what we saw from Mickey in spring training," Girardi said. "We felt he was the most likely to help us. ... he's going to get a shot and we hope that he's a boost in the arm."

It seems likely he'll be the starter going forward. After all, it's now or never for the former No. 1 overall pick. The Phillies are doing this at the right time, giving him a few months to show what he can do at a position that has been god awful to start the year for Philadelphia before the trade deadline arrives mid-summer, which gives the Phillies the opportunity to take their center field options out of house if needed.

Moniak isn't in New York to start Wednesday, but Girardi said he expects the rookie to "have a bright future" and to get quite a bit of playing time as the season continues.