What happened to the Phillies offense? 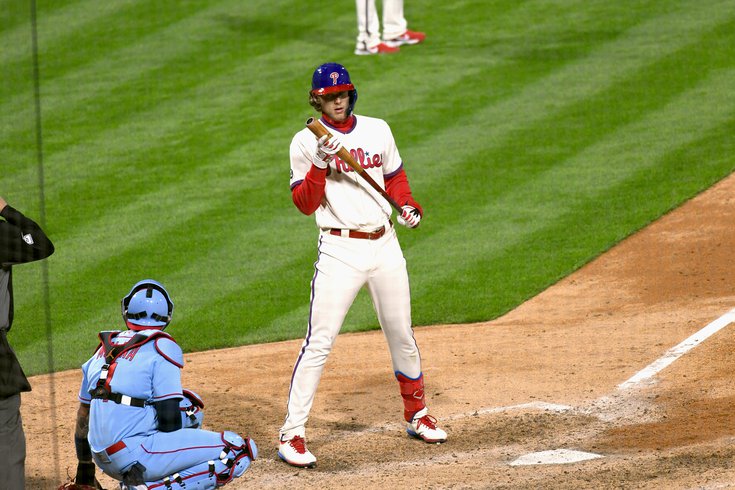 PHILADELPHIA, PA - APRIL 17: Alec Bohm #28 of the Philadelphia Phillies stands at bat during the game against the St. Louis Cardinals on April 17, 2021 at Citizens Bank Park in Philadelphia.

Baseball is a unique game. Even the best hitter in Major League Baseball fails two out of every three times.

The long season, 162 games, often assures that the law of averages prevails, and bad luck is more or less eliminated by a gigantic sample size. Which is why the Phillies struggling at the plate through their first 16 games (just over 10% of the full season), is concerning, but not yet alarming.

However, the drop off in production from a season ago — when the Phils were among the most productive in the league — is something worth noting. President of Baseball Operations Dave Dombrowski and the front office brought back almost the exact same lineup, with seven of eight 2020 regulars starting every day in 2021 (center field and Mickey Moniak/Roman Quinn being the exception).

The conventional wisdom heading into this current season was that if the Phillies could solve their awful bullpen, which they have so far, and improve their lackluster defense just a little bit, they'd be a team contending for a playoff spot. At 8-8, it's too early to tell on that front. But their mediocre numbers at the plate need to improve.

The Phillies' 2020 offense, which failed to make the playoffs in last year's truncated 60-game campaign, was in the top 10 in most offensive categories. The most noteworthy of these is runs per game, where the team last year scored more than 30% more. Philly has scored two or fewer runs six times in less than a month — which is not good. The team is wasting good pitching, like they did Monday night as Chase Anderson and the bullpen held San Francisco to two runs and the Phils went 0-for-8 with runners in scoring position and left 11 guys on base.

A lot of the blame goes to the bottom of the order, where the center field spot has been historically bad (and usually hits 8th), and Andrew McCutchen has been struggling at the leadoff spot.

"We're not happy with thats going on," manager Joe Girardi said Monday night. "We are on our third centerfielder, Mickey [Moniak] is getting a chance. We'll continue to give him a chance, I know they're all capable of hitting at a much higher clip they're just not doing it for whatever reason. We need someone to be productive out there."

Moniak, Adam Haseley and Roman Quinn have combined for two hits all year. And when the opposing pitcher has what have essentially been three automatic outs after the heart of the order, it can be hard to get a rally going.

"It makes it more difficult," Girardi said. "You have the pitcher obviously hitting 9th, if the 8th hitter is struggling and the 1-hitter is struggling it's tough. We need more production... averages are down all over the league, the numbers are shocking to me."

"We gotta get guys going," he continued. "There's other lineups that are going through what we are going through. And I can't tell you why. There are a lot of down numbers than what we have seen in the past, maybe pitching is that good?"

The Phillies have indeed faced excellent pitching from Jacob DeGrom, Marcus Stroman (twice) and the Mets to Charlie Morton (twice) and the Braves, to Kevin Gausman, who was lights out Monday night, and the Giants. Maybe when the Phillies face lesser pitching their bats will even out.

There are, however, bright spots too. Bryce Harper had three hits Monday, raising his batting average to .327. Harper's average is second on the team only to Jean Segura, who has the fourth best batting average in the National League so far at .345. Didi Gregorius, J.T. Realmuto and Rhys Hoskins are also off to solid starts with the bat.

For whatever reason, the top-heaviness of the lineup has made it harder for the Phillies to score runs. But there is a ton of talent and a ton of games left, leaving Girardi less concerned about their hitting than he would be if it was 90 degrees outside in the middle of August.

Still, the team needs to get it together. Is there a way to do that?

"Guys trying too hard? I think that's possible, I think guys are frustrated."