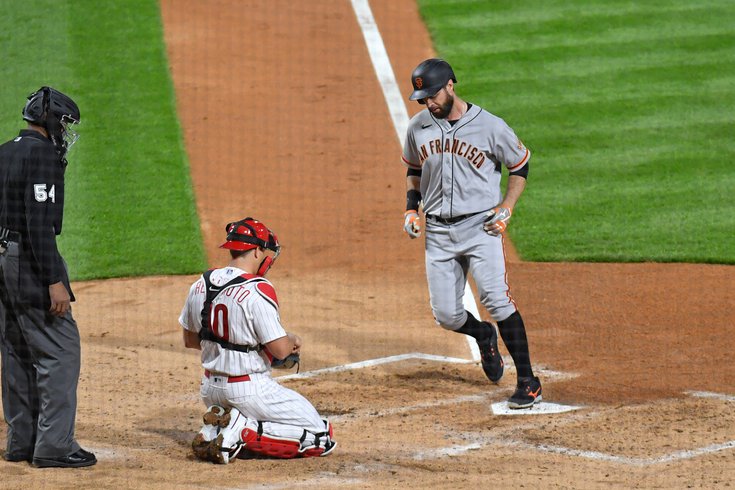 It was a home run from Brandon Belt of the San Francisco Giants Monday night that sent a fan running after the baseball.

If you tuned in Monday night to watch the Phillies' 2-0 home loss to the San Francisco Giants, you probably heard and noticed a lot of interesting things.

It was former manager Gabe Kapler's first game back in Philadelphia since being fired after the 2019 season. There was also an orchestra of "E-A-G-L-E-S" and "Fire Howie" chants among the 9,150 fans in attendance at Citizens Bank Park.

But probably the funniest, and most noteworthy, event to occur during the game was when a spectator wiped out over a row of chairs as he tried (and failed) to secure a home run ball in right field.

The only scoring in Monday night's game came in the top of the 3rd inning, when Giants first baseman Brandon Belt sent a two-run home run into the right field seats to give San Francisco all it needed to get the win.

After the ball landed, a fan can be seen on the broadcast running down the stairs to retrieve the souvenir. As he prepared to climb over the first row of seats to grab the baseball, the spectator slipped and fell onto the concrete. Undeterred by the fall, the fan then reaches for the ball just inches away, but another spectator swooped in first.

The man who embarrassed himself on TV isn't just any normal baseball fan. His name is Zack Hample, a diehard who travels to stadiums across the country collecting home runs and foul balls that fly into the stands.

Hample took to social media after the wipeout to confirm it was indeed himself.

To all my friends who've been texting/DM-ing to ask if I'm okay, thank you! I'm fine. And to all the haters, I'll be back at it tomorrow at a different stadium. 😘

Hample claims to have snagged more than 11,000 baseballs at 60 different stadiums, according to his website. Noteworthy pieces among his collection include Mike Trout's first career home run and Alex Rodriguez's 3,000th career hit.

Some have criticized the New York City native as being a bit too overzealous in his quest. The ball hawk described his affection for collecting baseballs as "an obsession" during an interview with HBO's "Real Sports with Bryant Gumbel" in 2017.

"I don't hide from that word," Hample said. "It's absolutely an obsession. Drives me crazy. I can't even watch baseball highlights on TV anymore because it's just one home run after another landing in this section where I just was last week and when I went to that ballpark last year, they didn't hit balls there. It just drives me crazy. An obsession is probably on the mild end of how this could be described. Sickness might be a better word."

Despite fans not being allowed to attend MLB games in 2020 due to the COVID-19 pandemic, Hample would not take no for an answer. He went to Fenway Park and stood outside the stadium, hoping to catch a few home runs that flew over the Green Monster and into the streets of Boston.

"A global pandemic is not going to stop me from getting on the board this year," Hample told HBO in a follow-up interview last year. "If I can get a ball in a season where nobody is even allowed into a stadium, that's almost like beating the odds in the biggest way possible."