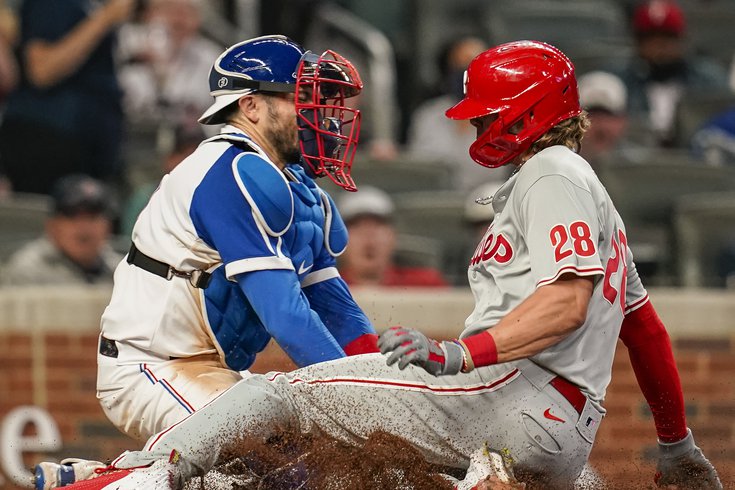 The home plate umpire called Alec Bohm safe, but replay showed that the Phillies' third baseman might not have even touched the plate when scoring the go-ahead run Sunday night.

The Phillies avoided a three-game sweep by the Atlanta Braves with a 7-6 win on Sunday night. But the win didn't come without controversy, as a bang-bang play at home plate in the top of the ninth inning that gave the Phillies the go-ahead run left many upset with both the call and MLB's replay review system.

The game was tied 6-6 in the top of the ninth inning Sunday night when shortstop Didi Gregorius stepped to the plate at Truist Park. Third baseman Alec Bohm had led off the inning with a double and advanced to third base on a ground ball out from second baseman Jean Segura.

Bohm was just 90 feet away from home plate, and with just one out in the inning, the Phillies would have two cracks at getting him in.

Gregorius lofted a fly ball to left field that initially appeared to be too shallow for Bohm to tag up and score against Braves' outfielder Marcell Ozuna.

However, Phillies' third base coach Dusty Wathan told Bohm to head for home. Ozuna's throw was to the outside of the third base line, forcing Braves' catcher Travis d'Arnaud to provide Bohm with a narrow path to slide into home plate safely. But the throw had beaten Bohm and it appeared he would be tagged out.

Bohm made his slide into home plate as d'Arnaud simultaneously slid back over to apply the tag. The home plate umpire called Bohm safe, giving the Phillies a 7-6 lead that would turn out to be the final score.

When watching it in real time, it looked like Bohm barely snuck his toe past d'Arnaud's tag and touched home plate. But when slowed down on replay, it's very unclear if Bohm even touched home with his foot when crossing the plate and being tagged.

Alec Bohm scored on this bang-bang play in the top of the 9th.

It proved to be the winning run. pic.twitter.com/lEft3iW0S9

Upon review of the call, the umpires confirmed that Bohm was safe on the play. In order for a decision to be overturned, the umpires must find irrefutable evidence that they made the wrong call. If there's any sort of ambiguity, the call almost always stands.

"I was called safe," Bohm said after the game. "That's all that matters."

#Phillies 3B Alec Bohm: "I was called safe. That's all that matters." pic.twitter.com/RazlyrGAkb

"It was by the skin of his big toe I think that we scored," Phillies' manager Joe Girardi said after the game.

#Phillies Manager Joe Girardi on Alec Bohm's game winning run: "It was by the skin of his big toe, I think, that we scored." pic.twitter.com/3tl0ngXRVx

While the Phillies and their fans were not upset with the call, many others around baseball strongly disagreed with the decision that Bohm was safe. That included the Braves and their fans, other MLB players, fans and members of the media.

If MLB has a view that is exclusive to them, that needs to be a part of the explanation for the call being upheld. I did not see one replay which showed Bohm’s foot/toe touch home. Appeared to pop right over the plate


Bohm never touched the plate, but who cares, go phillies!


Bohm was clearly safe. I understand why a Braves fan might be upset by that. Thank goodness we have replay to #GetItRight.


Brian Snitker gets right to the point ⤵️ pic.twitter.com/bk4KeMbSSH


It's important that MLB come out today with a statement saying the pivotal review in ATL last night was incorrect. There is no evidence that Alec Bohm touched home plate. None.

I'll say, as I've said many times before, the replay system, as used by MLB, sucks.

It's done nothing to improve the game, because umps are so reluctant to overturn calls. They protect their brethren. And it's embarrassing for MLB on nights like this, when everyone can see it.


Absolutely brutal, saw two angles that were clear he never touched the plate and we get a call stands? I’m with everyone else, what’s the point of replay? https://t.co/4F1bZAzNCX

"It's clear that his foot didn't touch the plate, that it was on the chalk. Everyone saw it and sees it. Everyone knows it. For MLB not to overturn that, it's embarrassing. Why even have replay?" pic.twitter.com/LFGBOcN3Z3

One of the big questions within the game about this MLB replay system has always been how willing umpires in the replay room are to overrule a call by one of their fellow umps.

Hard for the replay crew to look at Lance Barrett standing right on top of this play and say, “Wrong!”


The dreadful live call in the Phillies/Braves game and the ensuing replay emoji shrug to uphold it is made far worse by the fact that MLB umps are not required to explain their call “after further review” to the crowd and, thus, home audience like NFL, NBA and NHL refs all are.


No ump has ever made a debatable call until tonight, apparently. https://t.co/TXgJrn9dMB pic.twitter.com/U5TLozWlfO


I thought safe but the slow mo was close https://t.co/661jmxTbAo


Sucks that MLB's seemingly ended up with the worst of both worlds on replay — creating new problems (slowing everything down; making runners coming off the bag for a fraction of a second into A Thing) while not fixing the problem it should have (overturning clearly bad calls)!

Nevertheless, the Phillies will happily take the win and continue with their NL East road trip in New York against the Mets this week in a four-game series.