Kicking off the 2019 Philadelphia mayoral campaign

The election is an opportunity to clean up the city 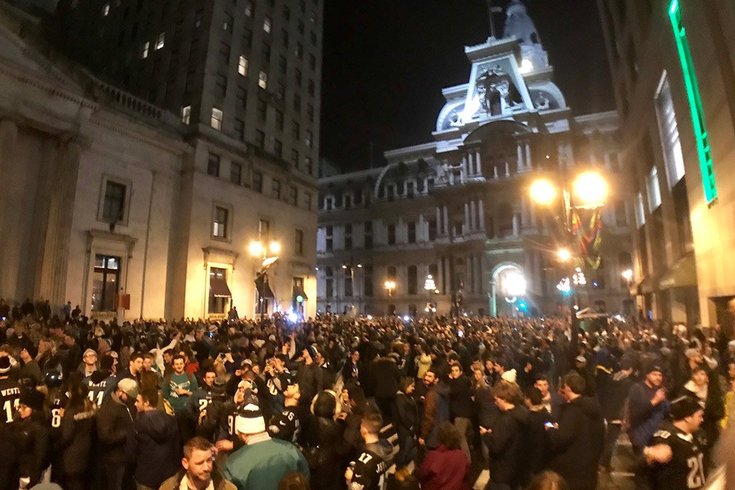 A massive crowd gathers on South Broad Street in Center City to celebrate the Eagles' win in Super Bowl LII on Feb. 4, 2018. With the 2019 mayoral election looming, Philadelphia needs a big-play offense of radical change and a full-on frontal assault on the unsatisfying state of our city, writes Brett Mandel.

As Philadelphians eagerly await the beginning of the first-ever Eagles season as Super Bowl Champions, the city's pols and players are quietly talking behind closed doors about the 2019 mayoral campaign. The mayoral election is often described as the Super Bowl of Philadelphia politics, but, let me be the first to declare that – much like the pre-season football we are enduring – none of the candidates and candidacies that have emerged so far offer our city anything more interesting than undrafted talent and uninspired play.

Philadelphia needs a big-play offense of radical change and a full-on frontal assault on the unsatisfying state of our city. Only a candidate who offers an uncompromising, unrelenting, and unflinching action plan deserves attention. Only a candidacy that presents such a plan deserves support. None will do so.

MORE OPINION: In Philly, we raise taxes on a poor city because we run a city poorly

For too long, Philadelphians have endured as a city where the little fix helps the connected while so many big problems are ignored and unfixed. A better Philadelphia would focus on establishing a city that actually works for all of its citizens. A radical plan for a better Philadelphia does not need to be complicated, but it must abandon an acceptance of incremental improvement in favor of actually solving our city's problems.

The poetry of a Super-Bowl-worthy mayoral campaign – the scheming and scripting of game plays – must concern these deep and intractable Philadelphia problems. It must address expanding systems of governmental transparency and accountability, ending "stop-and-frisk" policing, and establishing a tax structure that helps attract and retain firms and families.

But, the prose of the campaign – the blocking and tackling at the line of scrimmage – must speak to tangible issues that affect everyday Philadelphia.

Litter blows through Philadelphia neighborhoods and chokes sewer inlets. Debris collects in public parks and on athletic fields. We need regular and effective cleaning of every single neighborhood of Philadelphia. We need to consistently maintain our parks and recreation facilities and public spaces. We do not need a miracle to make it happen. We just need to invest in the staffing and systems to make a cleaner Philadelphia.

Philadelphia's streets are not just dirty, they are often perilous. Streets are pockmarked and potholed. Pedestrians and bikers too often navigate through the city in peril. We need to invest in more regular resurfacing, better coordinated street openings, and improved maintenance of our water and sewer conduits. We need to calm our traffic, enhance mass transit options, and protect the walkers and cyclists who move through the city. We do not need magic to make it happen. We just need to invest in the infrastructure to make a Philadelphia a city with the capacity embrace all modes of transportation.

As to any question about how to fund the investments our city needs, I refuse to entertain the idea that we cannot budget for what we need. Today, we prioritize wasting scarce city funds on a boondoggle of a new police headquarters. Tomorrow, we could prioritize cleaning our neighborhoods and paving our thoroughfares. Today, we prioritize paying out sexual-harassment settlements and awards in wrongful-death lawsuits. Tomorrow, we could prioritize investments in public safety and public services. Any budget protector who would tell us otherwise is playing politics and not working for a better Philadelphia.

It is time for real Eagles football and it is way past time to have a championship-level mayoral campaign that puts forth a vision to achieve a better Philadelphia. Given what I have seen and heard about the campaigns shaping up for 2019, I'm afraid our chances for the city's future will have to rest on the former and not the latter.