We tried it: KTL Philadelphia, an educational kettlebell weightlifting workout

By Bailey King
PhillyVoice Staff
Fitness We Tried It
from 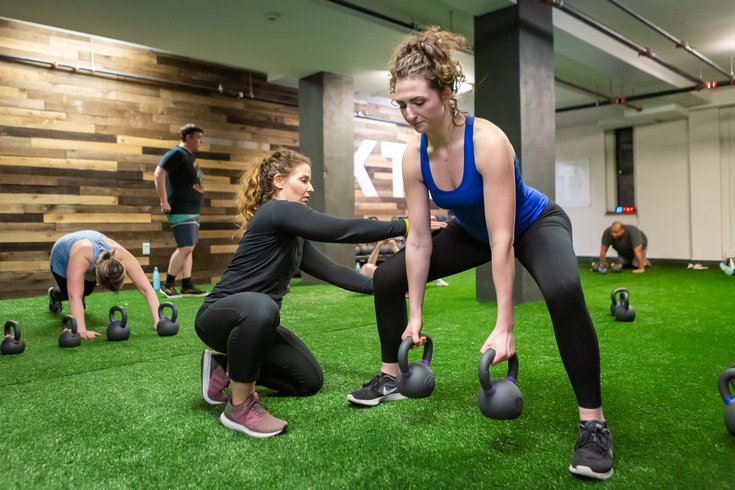 Not only is KTL one of Philadelphia’s newest gyms (they opened in mid-December), it is one that brings a completely new concept to group fitness. These three letters — KTL — tell you just about everything you need to know about this gym: kettlebells are the epicenter of every single workout.

The gym's singular focus isn’t quite revolutionary — spin, barre and boxing studios do just that. What is truly unique about KTL is the education they incorporate into their small group fitness classes. You get a killer workout while becoming more fitness-literate along the way. 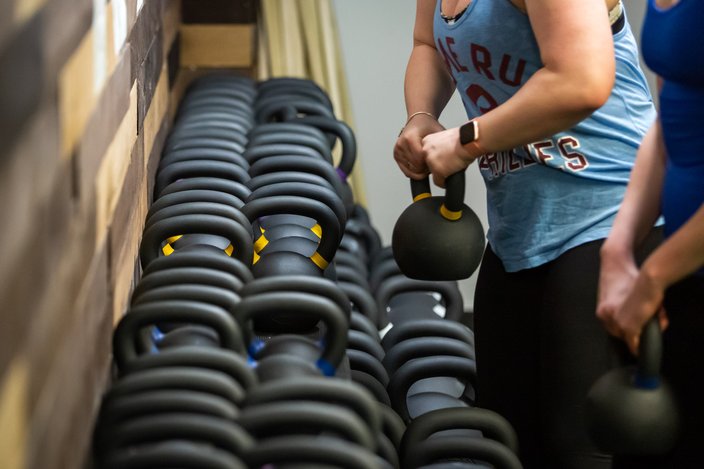 Students return kettlebells to the rack during a class at KTL Phila.

By utilizing a system similar to the levels of karate belts, everyone who visits KTL starts out as a “white bell.” This beginner level is for someone who is still learning the basics of kettlebell training, either as a total fitness novice or as a person unfamiliar with kettlebell training, specifically. But don’t worry, you still get a killer workout — we entered KTL as a white bell earlier this week, and the soreness has yet to dissipate.

Once you learn the kettlebell basics as a white bell — like how to properly pick them up and put them down without strain as well as the proper techniques and skills needed to get to the more glamorous moves (like the famous kettlebell swings). Because, oh yeah, white bells don’t do kettlebell swings — the most common kettlebell move that is not-so coincidentally done incorrectly. 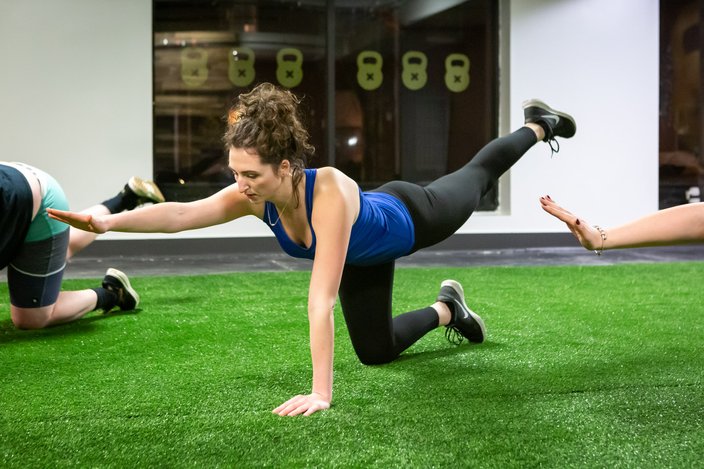 Bailey King stretches during the warmup portion of the class at KTL Phila.

After taking a literal test that involves demonstrating you have mastered proper form and technique with the rudimentary kettlebell moves, white bells move on to a black bell, where the workouts become more challenging with complex circuits and exercises. It usually takes folks anywhere between one to three months to move up a level. Gold follows black. Reaching this master level insinuates, according to KTL, that “you've become a badass.” And you’ve learned some valuable fitness knowledge, to boot.

The best part is that all levels can workout together in the same class — trainers offer options for each level in every class so that everyone is equally challenged. 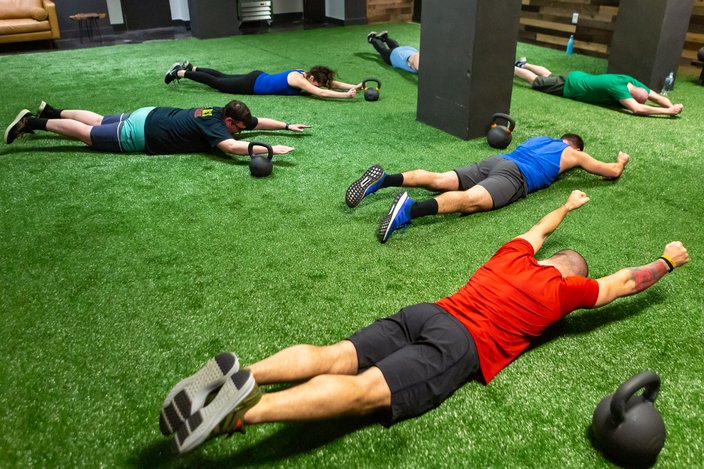 30-second superman holds warm up the core and glutes prior to the kettlebell workout.

The workout at KTL sampled by PhillyVoice started as all KTL workouts do — with foam rolling to loosen muscles for the strenuous workout ahead.

Then, we moved to the warm-ups, which were most certainly warming. Our class — about eight people — worked through rounds of alternating bird dogs and chaturanga (yes, like the yoga move) flows. Feeling perfectly warm and ready to start lifting kettlebells, KTL’s head coach Carla Waldron told everyone to line up for inchworms up and down the turf. While it may look like the turf is fairly small, this exercise was brutal. 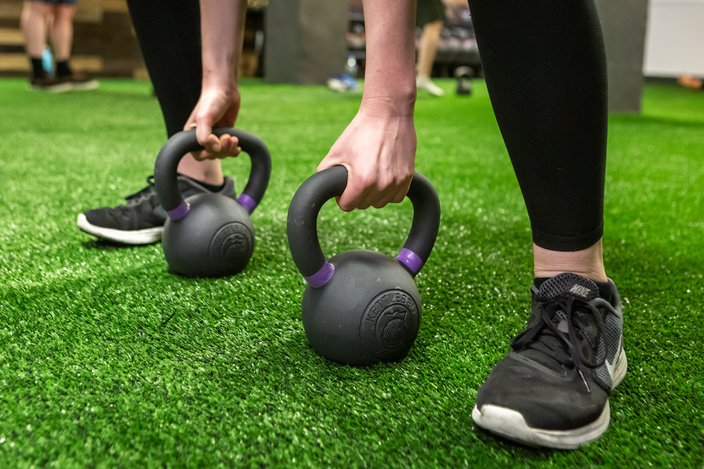 Participants can choose to use one or two kettlebells in each set of sumo squats.

A quick shake-out after those grueling inchworms and the kettlebell work began. We did drop sets of single-arm kettlebell rows, during which Carla was giving everyone personal attention to ensure proper form — square shoulders and an engaged arm that wasn’t lifting, for balance. She also encouraged everyone to challenge themselves in the weight they chose for each set. Each set of rows was rounded out by a 30-second Superman hold. 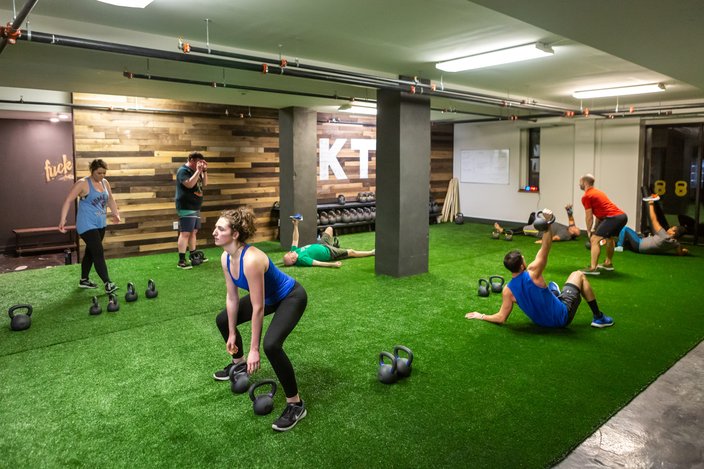 Then, it came time to increase cardio. Carla designed a challenging full-body circuit of renegade rows (which is basically planking on top of two kettlebells with a row on each side), followed by push-ups. Then we moved swiftly to weighted sumo (wide-leg) squats followed by a half Turkish get-up — which looks really cool, but is quite challenging to do properly, even without weight.

After about three rounds of this circuit, the 45-minute class was over and I was completely exhausted, and feeling my achievement: that’s the great thing about KTL, they challenge you into improvement. 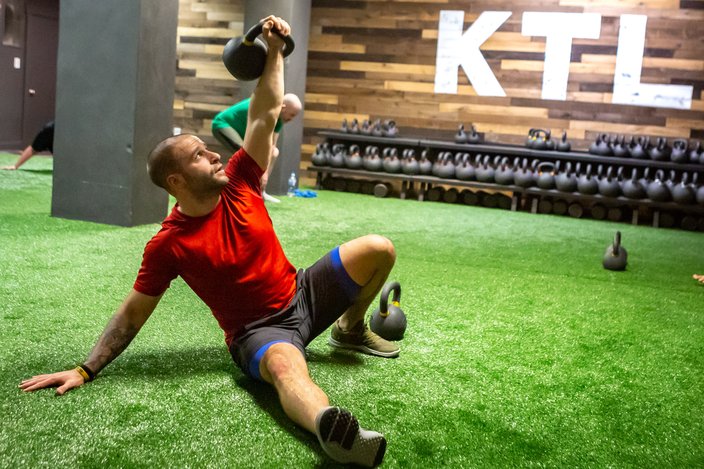 Perry O’Hearn, owner of KTL, has been trying to get this concept off the ground for two years — but couldn’t find the right spot for it, until he discovered the location at 19th Street and Spring Garden. As the owner of Philly Phitness, which focuses on personal training, he wanted to bring something to Philadelphians that is more accessible. Enter the focused small-group fitness concept of KTL.

O’Hearn’s unique bell-levels concept is an effort to give “respect to the exercise, form and technique so that it is an earned skill.” Plus, this level system differs from most group fitness classes (spin, yoga or CrossFit, for example), which often result in what O’Hearn calls a “goldilocks situation" –  essentially catering to the middle-of-the-road crowd, but isolating beginner and advanced participants to a degree. Not to mention, KTL gives participants a reason to strive.

According to O’Hearn, the two best things about kettlebells are: 1. They’re simple, you need only a maximum of three at your house for a solid workout; and 2. They’re self-limiting, so if you’re doing it wrong, kettlebells will let you know — unlike dumbbells, for example.

KTL is at 1822 Spring Garden St. (on the corner of Buttonwood and N. 19th streets). You can book a class here — it’s $30 for a drop-in, $250 for a 10-class pack. Classes currently are on the books Monday through Friday, mornings and evenings, plus a Saturday morning class. Weekends at KTL usually feature a kettlebell workshop of some kind, focusing on a particular body part or move. Keep your eyes on their schedule for more information.