The 57-pound, 50-inch long catch was made from the shore of the Susquehanna River 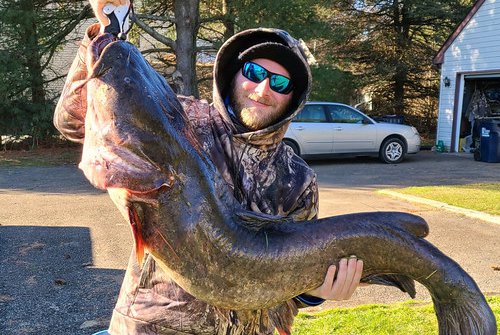 Joshua Dixon, 34, shows off the 57-pound, 50-inch flathead catfish he caught in Maryland on Dec. 27, setting a state record and topping marks made by Pennsylvania anglers.

A Maryland man is celebrating a new record after catching a massive flathead catfish in the Susquehanna River late last month, topping marks set by Pennsylvania anglers in recent years.

Joshua Dixon, 34, caught the 57-pound, 50-inch fish on Dec. 27 near the Lapidium Boat Ramp, which is approximately 10 river miles south of the Pennsylvania border.

The Maryland Department of Natural Resources has recognized Dixon as the first state record holder for the invasive catfish.

Dixon was fishing from the shore with Zoom plastic swimbait, using only medium-weight swimming tackle. It took him about 30 minutes to get the flathead catfish, an invasive species, out of the water.

"It was really weird because I thought I snagged a tree," Dixon told the Maryland Department of Natural Resources. "It didn’t feel like a fish but after a while, it was going crazy."

The Pennsylvania mark for the Susquehanna River was set in April 2019 by Jeff Bonawitz, who caught a 50-pound, 7-ounce flathead catfish near the Muddy Creek public access area in York County.

Dixon's catch also tops a Philadelphia man's 56-pound, 50-inch flathead catfish, caught last May in the Schuylkill River in East Falls. At the time, Pierce compared the fish he caught to a torpedo.

Dixon donated his record-breaking catch to friends who harvested the fish’s protein-rich filets, the agency said.