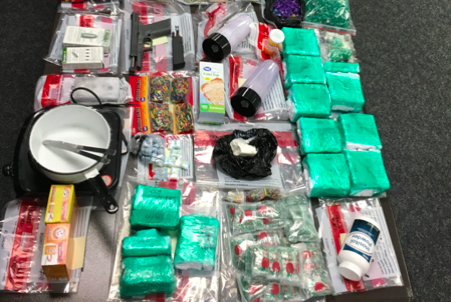 Fourteen people have been arrested in a Kensington drug bust that prosecutors said was the largest operation conducted in an ongoing initiative to clear traffickers from the Philadelphia neighborhood.

On Tuesday morning, multiple law enforcement agencies participating in the Kensington Initiative executed 20 search warrants on residences, warehouses and vehicles believed to be connected to a criminal organization.

Officials said the investigation spread as far north as Allentown and as far east as parts of Bucks County, where simultaneous raids were carried out on Tuesday.

Investigators said the ringleaders of the organization allegedly used children to sell their drugs on Kensington street corners.

“Kensington is a neighborhood ravaged by the heroin, opioid, and fentanyl epidemic, and criminal organizations such as the one we shut down today are fueling the crisis,” Pennsylvania Attorney General Josh Shapiro said in statement.

The FBI, DEA and Homeland Security Investigations assisted multiple local law enforcement agencies in carrying out a three-month wiretap investigation. Authorities said three shootings were prevented during the course of the operation and 198,000 doses of heroin were taken off the streets of Kensington.