Leslie Odom Jr. talks about how he earned the role of Sam Cooke in 'One Night in Miami' 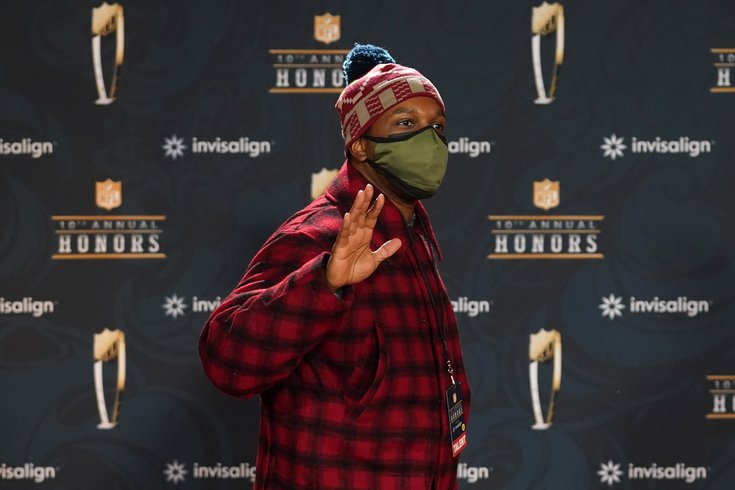 Leslie Odom Jr. admitted that he was asleep when the Academy Award nominations were announced last month.

Leslie Odom Jr.'s award-winning portrayal of Aaron Burr in the hit Broadway musical "Hamilton" was not what earned the actor and songwriter the role of Sam Cooke in the film "One Night in Miami."

Instead, it was Odom's appearance in a Nationwide insurance commercial from 2016 that got him the part of Cooke in the critically-acclaimed film.

During an appearance on "The Late Show with Stephen Colbert" Wednesday, Odom and Colbert were talking about how the movie's director, Regina King, was more familiar with the Philly native's singing skills in the Nationwide advertisement than she was with his role in "Hamilton."

But Odom said he wasn't surprised that the Nationwide commercial helped him earn the role.

"When an insurance commercial is getting you roles of a lifetime as Sam Cooke, that's a good brand partnership," Odom joked.

When Odom was selected for the role, he originally thought that singing Cooke's songs would not be included.

Odom said that he has been a longtime fan of the late R&B and soul singer he portrayed in the film.

"In many ways, Sam is one of my teachers," Odom said. "Singing is an oral tradition. It's passed down from generation to generation. We learn the way we're supposed to approach a song and what is required of us as storytellers. But I went back to the beginning and kind of tried to understand the evolution of his sound and tried to understand the psychology of it, you know, for maybe why he was making the choices he was making."

The 39-year-old Odom's portrayal of Cooke in "One Night in Miami" earned him his first two Academy Award nominations last month. But Odom admitted that he was fast asleep when the Oscar nominations were unveiled.

"I was deep into REM sleep," Odom said. "(The nominations announcement) happens very early in Los Angeles. My team did let me know. They said, 'We know that you don't want to know what tomorrow is. We know you're not going to get up and watch. But just leave your phone on. Be a grown up and leave your phone on in case we need to reach you in the morning.' And so I did that at the very least."

Odom celebrated the nomination by having some champagne all by himself. His wife, Nicolette Robinson, was pregnant at the time and recently gave birth to the couple's second child.

The actor's portrayal of Cooke also earned him his first two Golden Globe nominations in February.

Odom, who grew up in the city's East Oak Lane neighborhood, won best actor in a musical at the 2016 Tony Awards for his role as Burr in "Hamilton." He also earned a Grammy Award in 2016 when the show won best musical theater album.

"One Night in Miami" tells the story of a fictional encounter in February 1964 between Muhammed Ali, Jim Brown, Malcolm X and Cooke, who had gathered to talk about their roles in the civil rights movement and cultural revolution of the 1960s.

The film can be streamed on Amazon Prime Video.