A contingent of U.S. lawmakers advocated for legislation reforming the criminal justice system during a legislative forum held Monday at the NAACP national convention.

“We know that the criminal justice system is broken,” said Sen. Gary Peters, D-Michigan. “We have a system that focuses too much on taking young people and at-risk children away from schools and into prison.

“We spend more money in Michigan on the criminal justice system and prisons than we do on higher education. That is wrong. We can’t let that happen anymore.”

Fattah has backed a companion bill in the House of Representatives. He also supports the America FOCUS Act (Future Opportunity and Outcomes in the United States), which would allocate revenue generated by corporate fines to reentry programs.

“We incarcerate more people than the rest of the world,” Fattah said. “It’s a shame. It’s a national disgrace.”

The lawmakers expect President Barack Obama to push for criminal justice reform when he addresses the convention’s 8,000 delegates Tuesday afternoon. On Thursday, Obama will become the first sitting president to visit a federal prison when he tours Oklahoma’s El Reno Correctional Institution.

“The president has made this a priority,” Fattah said. “When he comes in tomorrow you’re going to hear him lay it out very plainly. Without failing, we’re going to have some reform of our criminal justice system.” 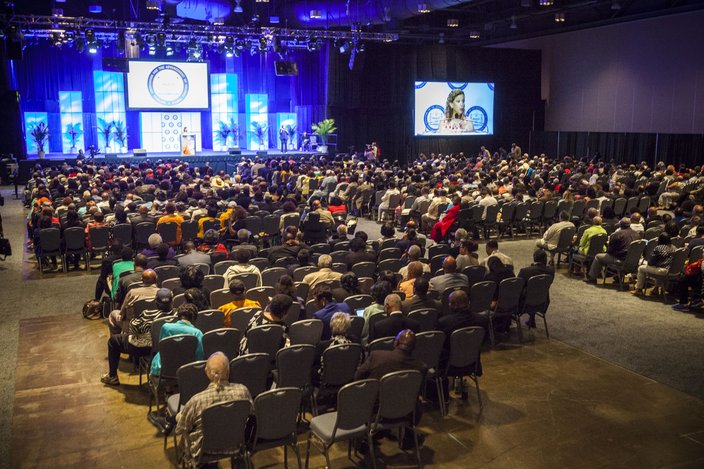 Booker also pushed for legislation preventing employers from discriminating based on sexual orientation, saying such issues are as much a part of the civil rights fight as racial equality.

“The reality is we still live in a nation where you can post on Facebook the picture of your wedding, but then you could be fired the next day at work,” Booker said. “If we are going to be strong as a movement when we talk about civil rights, it (needs to be) in an inclusive way.”

“We live in trying times,” Clyburn said. “We live in challenging times. The conflict is going to be tough. When the going gets tough, the tough get going. Let’s prove how tough we are.”

The NAACP will determine its legislative agenda Tuesday morning when it approves a series of resolutions pitched by its members earlier this year. Resolutions could range from criminal justice to employment to education issues.