The calls would come sporadically to AJ Nola from one friend here, another there, about his magnolia stalk-thin youngest son, Aaron. They tended to have the same comic theme, too. To those that didn’t know, it might have appeared as if Aaron was going through some strange gyration in a parking lot, or at a bus stop, or waiting in line at a restaurant.

AJ would laugh. He knew.

He saw those same “strange gyrations” almost every night for about 20 minutes from Aaron throughout the Nola house, whether it was in the kitchen, or the den, in front of the TV, but mostly glaring at his bedroom mirror before he went to bed.

It was just Aaron perfecting his pitching motion, staring down an imaginary batter, with an imaginary ball in his hand, imaging himself pitching in the seventh game of the World Series.

On Tuesday, that 12-year-old who couldn’t stop pitching through the parking lots, bus stops and restaurants of Baton Rouge, Louisiana, will be pitching in the 89th Major League Baseball All-Star Game at Nationals Park, in Washington, D.C., as the lone representative of the NL East-leading Philadelphia Phillies.

If not for Aaron, whose 12-2 record is the best in the National League, the Phillies wouldn’t be anywhere. His 2.27 ERA is third in the NL and fifth overall in Major League Baseball. In 19 starts, Nola, 25, leads the Phillies in wins (12), strikeouts (126), pitches per start (98.2) and is the youngest Phillies pitcher to be selected to an All-Star Game since Cole Hamels (23 years) in 2007, and the first Phillies pitcher to be an All-Star since Cliff Lee in 2013.

Nola’s first half of 2018 places him on a special pantheon of former Phillie greats. In 1980, Hall-of-Fame pitcher Steve Carlton (14-4, 2.14 ERA) is the only other pitcher in Phillies history that had as many wins and an ERA as low as Nola’s before the All-Star break. Nola’s .545 opponent’s OPS is the lowest in the National League, and second overall in MLB, one point behind Houston’s Justin Verlander (.544).

The gangly, 6-foot-2, 195-pound right-handed pitcher who was taken seventh overall by the Phillies in the 2014 MLB Amateur Draft is proving to be among the top five pitchers in Major League Baseball. And while some segments of Philadelphia harbored doubts as to whether or not Nola would one day be a true “No. 1,” a trio in Louisiana knew long before anyone in the Delaware Valley had an inkling who Aaron Nola was — and that’s AJ (his dad), Kyle Achord (his high school coach at Catholic High in Baton Rouge), and Alan Dunn (his pitching coach at LSU).

“Coming up, I had heard a little bit about Aaron, and of course, I knew his older brother, Austin,” said Achord, who coached Aaron for four years and won a state championship with him in Nola’s junior year. “Austin was a highly acclaimed player and was a senior and Aaron was coming up as a freshman.

He’s sort of a Mr. Spock without the pointed ears, a Clint Eastwood without the gunslinger’s glint in his eyes. If you doubt his unflappability, you would be making a grave mistake.

“Aaron was a tall, thin kid with a wiry build, but his innate ability to throw strikes you saw early. That set him apart from an early age. His command was unbelievable, and that’s what jumped off the page with me. His velocity was okay, he was 80, 81 m.p.h. as a ninth grader — and that’s still good.”

At freshman tryouts for Catholic High, Aaron trotted out in 40-degree fall weather and kept hitting 80, 81 on the radar gun. He also couldn’t throw a ball outside the strike zone, it seemed, even if he tried. When the freshman season was over, Achord brought up the freshmen and junior varsity to scrimmage the varsity.

Achord gave a skinny 14-year-old Aaron the ball against a team that reached the Louisiana 5A (the largest classification) state semifinals and had four Division-I commitments. Aaron faced the first three varsity hitters, striking out the first batter and getting the other two on weak groundballs, which included the Bears’ best player, his LSU-bound older brother Austin.

That’s when Aaron’s noted stoicism emerged — he’s sort of a Mr. Spock without the pointed ears, a Clint Eastwood without the gunslinger’s glint in his eyes. If you doubt his unflappability, you would be making a grave mistake.

“You saw it then, and I still see it when Aaron pitches for the Phillies, his demeanor never changes,” Achord said. “I tell people this all of the time. Don’t think Aaron is not competitive, and that there isn’t a fire burning in there. He never gets real high or real low either way.

“When he toes the rubber, he’s out to do everything to help his team win. The demeanor and ability to throw strikes separated him apart, but as he got older and stronger, the velocity came. The summer entering his sophomore year, he pitched with our varsity. It’s when we decided to bypass the junior varsity for Aaron. His junior year, we won the state championship and his senior year, we lost in the semifinals.” 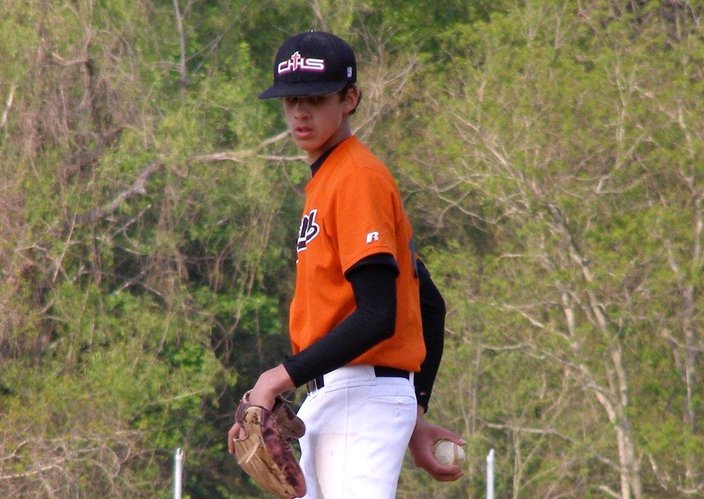 Midway into his junior season, Aaron was shelved for a month with a hernia. Achord wanted Aaron to pitch one playoff game, and in his first start back, he threw the Bears into the state finals.

Aaron still refers to Achord as “Coach,” after all of these years.

“Aaron’s tough, he’s tough-minded, and his success doesn’t surprise me. He’s always been a good kid from a good family,” Achord said. “I’m proud of him. People around here [in Baton Rouge] love him, because the beauty about Aaron is that he hasn’t changed at all. That speaks to his parents and how they raised him. He’s an all-star now, and that won’t change him, either. When he got to 8-2, I booked my flight to Washington, D.C. I can’t wait to go up there and see him.”

Achord handed Nola off to Dunn, who had him for three years at LSU. Nola’s poise continued on the major college level. Dunn arrived at LSU in June 2011 and didn’t see Nola pitch live until the fall of 2011, when Aaron was a freshman.

In Nola’s second start, Dunn saw who Nola could be. He was a freshman starting against Tulane, a bitter local rival of LSU. Nola’s command was impeccable. He threw 78 pitches at Tulane, amazingly, 62 (79%) were for strikes over eight innings in a 5-0 LSU shutout.

Against Mississippi State, in Aaron’s SEC debut, he got knocked around early, giving up six runs. The Bulldogs knew Aaron pounded the strike zone and they were first-pitch swinging. After six, the Bulldogs still had six runs.

“That kind of gave us a glimpse of how good Aaron could be,” Dunn said. “The Mississippi State game told me Aaron didn’t panic, he stayed within himself and just pitched. We looked forward to his sophomore and junior years, and we knew he was gone after that.

He’s just Aaron. ... Most people in life wish they had that kind of confidence. He doesn’t let any situation get too big. It’s what makes Aaron different. His high skill level matches his personality, and not too many stars have that.

“Aaron has always had the ability to stay in the moment. He’s quiet, but inside, you know he’s grinding. He’s scary, because he’s like that silent assassin. If a team is lucky to get runners on second or third against him, they’re not scoring, because he’s not going to give in. His command was so good that Aaron did things no SEC pitcher ever did before. There was no question in my mind Aaron was going to do some great things—and this is the start.

“We love him at LSU, because he has that same demeanor, that calm, easy-going way. He’s just Aaron. What I love about him so much is his focus and work ethic. He wants to be the best, and he has that ability to not make the game get too big. Most people in life wish they had that kind of confidence. He doesn’t let any situation get too big. It’s what makes Aaron different. His high skill level matches his personality, and not too many stars have that.”

Nola finished his freshman year going 7-4 record, with a 3.61 ERA in 89.2 innings with seven walks and 89 strikeouts. And by the time he left LSU, Aaron would go down as one of the greatest pitchers in SEC history as the only player to be twice named SEC Pitcher of the Year (2013 and 2014). What Dunn remembers most are Aaron’s four-straight complete-game victories his junior year where he threw less than 110 pitches in each start.

Dunn is on the recruiting trail, otherwise, he would be in D.C. on Tuesday with Achord and Aaron’s family. But Dunn made sure to mention he will make sure his hotel room TV will be fastened on the All-Star Game.

AJ was an omnipresent figure in Austin and Aaron’s lives. He is an old-school, caring father, teaching his boys about respect and right from wrong. He also instilled into both boys that placid demeanor, never tip off your opponent, which was reinforced throughout Aaron’s maturation process by his older coaches.

But it really didn’t sink into AJ just how good his younger son was until AJ coached him his freshman year of high school.

Achord had a pitching program where the coaches would do bullpen sessions of 25 pitches during or after a practice.

One day, Achord approached AJ about Aaron, his eyes looking down in disbelief at the pitching chart.

Aaron had thrown 23 of the 25 pitches for strikes.

AJ set up a batting cage in the backyard of their home. After AJ got back from work, Austin would pester AJ to hit and throw. AJ, dead tired from work, dragged himself into the cages, but Aaron had to come along.

“It reached a point where he would pitch in the mirror every night. He would pitch standing out waiting in line at a restaurant. He would constantly go through his pitch motion, and it didn’t matter where he was. He was around 12, 13, in junior high school, and he kept working on his form on the mound. Aaron did that consistently night after night, going through his routine in his mind.

“Friends would call me and tell me about it. They tell me that can’t believe Aaron is an MLB pitching, because we would be waiting to eat in a restaurant and Aaron would be practicing his form [laughs]. I have a buddy of mine that never lets Aaron live that down. Anywhere Aaron could pitch his imaginary ball, he was going to do it. Without a doubt, Aaron is a perfectionist, which goes beyond saying [laughs].

“He has always wanted the ball. Aaron was pretty angry after the [season opener against Atlanta], because he wants the ball. He wanted to finish that game. I can’t tell you how proud I am of Aaron. I’m going to Washington, D.C. for the All-Star Game. I’ll admit that it’s going to be emotional for me. I’ve been watching the All-Star Game since I was four-years-old, and it’s surreal that it’s my baby boy who’s going to be pitching in that game.” 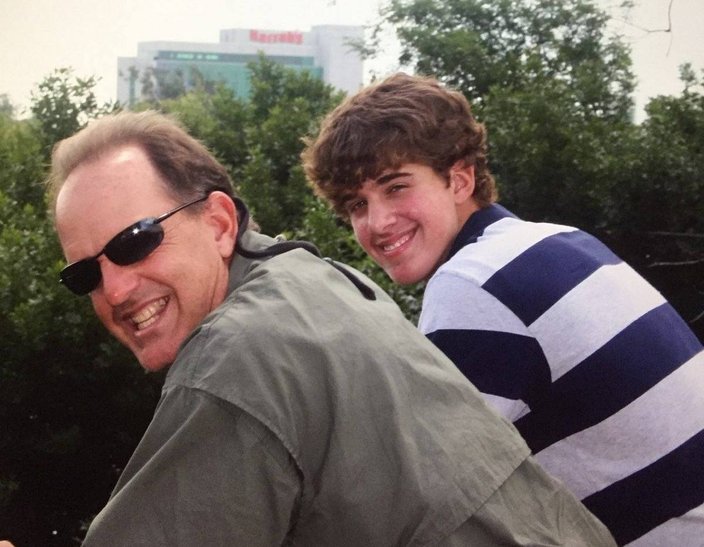