Lego Vatican on display at the Franklin Institute 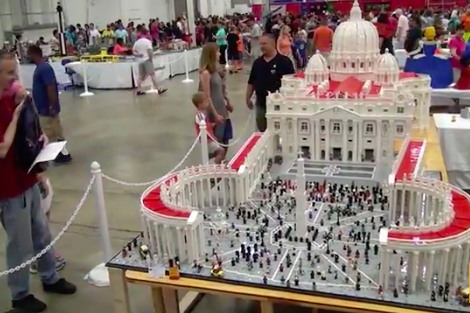 The Rev. Bob Simon, of Moscow's St. Catherine of Siena, constructed a replica of the Vatican using about 500,000 Lego pieces.

Lego enthusiasts are among the world's most devoted sculptors, as evidenced by the recent completion of Scottish fisherman Jim McDonough's 1:40 replica of the World War II battleship USS Missouri.

A priest from Moscow took that devotion to a new level entirely, constructing a replica of the Vatican out of about 500,000 Lego pieces in approximately 10 months, The Times-Tribune reports. 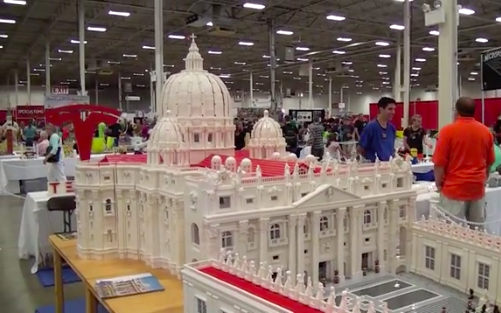 Lego replica of the Vatican (Beyond the Brick/YouTube)


The replica of St. Peter's Basilica and Square, now on display at The Franklin Institute through February 15, is the work of 50-year-old Rev. Bob Simon, a priest at Moscow's St. Catherine of Siena. The Plains Township, Pennsylvania, native grew up enchanted by Legos and knew from a young age that he wanted to become a priest.

His first crack at a Lego Vatican came in seventh grade and budded into a hobby that included building structures of cathedrals and trains.

After a long hiatus, Simon attended the LEGO Brick Fair in Chantilly, Virginia, an annual event featuring as many as 900 participants and 1,300 displays. When he left, his mind was fixed on accomplishing the daunting task of the Vatican replica.

In September 2014, Simon got to work on the 14-by-6 structure, returning to the rectory each night to continue his work. He went to great lengths to procure rare Lego pieces, purchasing white ruff collars for the Swiss Guard from a Hungarian man who owned nine of the world's total supply of 14. For the nuns, he plucked black-robed torsos from Star Wars kits and combined them with the hair of a kimono girl.

Simon described his hobby as "an exercise in mindfulness," expressing surprise at how the activity could help in prayer, mirroring the counting of rosary beads or the weaving of baskets by early Christian desert ascetics to keep their hands occupied.

After a stop at the LEGO brick fair in Virginia, Simon's Vatican replica is now at the Franklin Institute alongside New York artist Nathan Sawaya's Lego sculpture exhibit, 'The Art of the Brick.'  It will stick around to coincide with the upcoming exhibit, 'Vatican Splendors: A Journey Through Faith and Art.'

Check out the replica and listen to Simon describe his journey in this Beyond the Brick segment at the 2015 LEGO Brick Fair.