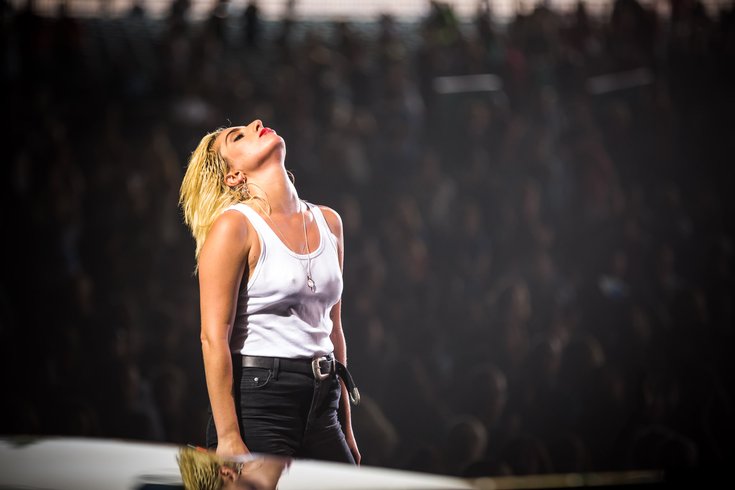 Lady Gaga and Lenny Kravitz brought thousands of people to their feet during a special concert in Camden Thursday for delegates of the Democratic National Convention.

Lady Gaga wowed the crowd with a series of folk and pop before venturing into a medley of her greatest hits. She followed a rocking set by Lenny Kravitz, who had nearly everyone within the BB&T Pavilion bobbing to his class version of "American Woman."

Lady Gaga's performance was on the minds of the thousands of delegates and invited guests as they exited the show, with many of them headed to South Philadelphia for the culmination of the convention.

"Out of the ordinary," Dina Strachan, of Mantua, N.J. said of Lady Gaga "Just such raw talent, going through all types of different genres, from jazz to class Beatles. You can't beat it. Good stuff."

Gaga opened a set of covers with a popping version of Woody Guthrie's "This Land Is Your Land," following with Neil Young's "Old Man." Many in the crowd are more familiar smash pop hits, but nonetheless were impressed by her voice.

"She was really good," said Ashely Ward, a 10-year-old from Clayton, N.J. "I thought she was going to sing the songs the way she used to, but she did really good. She started rocking out on the piano."

Kravitz kicked off the concert by blasting into his hit "Bring It On." But it was his classic cover of "American Woman" three songs into his opening set that brought the crowd to its feets. All over, people danced and jived as Kravitz belted out the well-known lyrics.

"Even though he said his voice wasn't totally there, he did phenomenal," Bridget Brady of Philadelphia said. "We were rocking it out on the lawn."

Kravitz completed a nine-song set that also included "Where Are We Runnin'," "Mr. Cab Driver" and "Fly Away." He finished his set with a rocking rendition of "Are You Gonna Go My Way." At one point, Kravitz descended from the stage and snaked his way through the crowd, prompting hundreds of fans to crowd around him to snap iPhone photos.

"Really, you felt part of the experience," said Scott Owens, of Gloucester County. "You felt one with everyone else."

In between sets, DJ Jazzy Jeff spun tunes while many concertgoers seated on the lawn rushed for cover when rain broke out. But the rain stopped before Gaga took the stage.

"Camden Rising," billed as one of the largest entertainment events in convention history, was put on to highlight the ongoing transformation of Camden to delegates and Democratic leaders from across the country.

"Camden Rising" was hosted by George E. Norcross III, a member of the Democratic National Committee and chairman of Camden's Cooper University Healthcare and the MD Anderson Cancer Center at Cooper. His brother, U.S. Rep. Donald Norcross, also attended the concert as a special guest.

“This event amazing performances by all the artists surpassed everything we had originally hoped for," George Norcross said. "Tens of thousands of people, who otherwise never would have visited Camden, got to not only see a great show, they got to see a city in the midst of a great comeback.”

Philadelphia Mayor Jim Kenney and Camden Mayor Dana Redd were among the prominent politicians spotted as the concert got underway. U.S. Sen. Cory Booker appeared on stage to introduce Lady Gaga, whom he said, "preaches a gospel of love that she puts to a powerful soundtrack."

But Booker also had a message for the residents of Camden, declaring it "the comeback city."

Tickets to the show were made available to every delegate and other invited guests. Thousands of other tickets were distributed to community groups in Camden.

"'Camden Rising’ has shown the nation that the City of Camden is a world-class destination for hosting top-tier events and attracting the best talent, and PhillyVoice.com was honored to tell that story as the event’s media partner," said Lexie Norcross, Executive Director of PhillyVoice.com. “The concert was a great success that served as a pep rally to the final night of the convention, energizing DNC attendees before their candidate's acceptance speech in Philadelphia later that evening.

“Seeing this significant event take place in Camden meant a great deal to me having grown up in South Jersey," Norcross added. “Camden is a city full of promise, and 'Camden Rising' served as yet another testament to the bright and successful future that lies ahead.”

After the show, the delegates boarded buses to the Wells Fargo Center in South Philadelphia for the most anticipated night of the convention – Clinton's address to the delegates.

"The message of this convention was ‘Stronger Together,’ and that’s what we saw here today in Camden, New Jersey," said Susan McCue, former chief of staff to Senate Democratic Leader Harry Reid. "On the final day of this historic Democratic Convention in Philadelphia, a light was shone across the Delaware river where thousands of people from all walks joined an inspired concert to celebrate unity and progress in a city undergoing a dynamic transformation through leadership, collaboration and hard work.”

The concert was produced by Live Nation.

“We were thrilled to have BB&T Pavilion host an event that is getting so much positive and national attention,” Live Nation Regional President Geoff Gordon said.