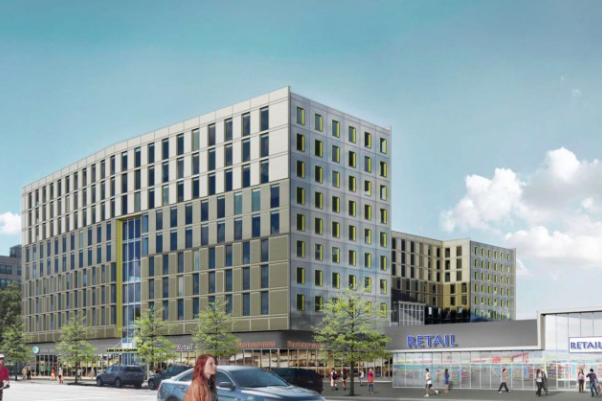 With Tower Investments CEO Bart Blatstein's megaproject at Broad and Washington stalled by the Civic Design Review Board, the focus has now shifted to the northwest corner of the intersection, where Alterra Property Group and MIS Capital, LLC have proposed a $100 million mixed-use project called Lincoln Square.

The project targets a 3.36-acre vacant lot currently owned by the Philadelphia Authority of Industrial Development (PAID) to raise an eight-story complex including 356 apartments and 74,000 square feet of retail space, according to Curbed Philly. Alterra and MIS Capital are under contract to purchase the site from PAID for $6,500,000.

Included among the details of the plan, according to The Philadelphia Inquirer, are a supermarket, a public walkway joining Broad and 15th streets, and the preservation of the historic rail shed constructed in the decade following the death of Abraham Lincoln, whose body passed through the area following his assassination. A portion of the supermarket could potentially be situated inside the rail shed.

If the proposal receives the required mixed-use zoning in June, the structure would wrap around the corner of Broad and Washington streets accompanied by a three-level parking facility.

Alterra's properties in Philadelphia include the Avenir apartments on S. 15th Street, the Icon at 1616 Walnut Street and the Shirt Corner apartments at 3rd and Market streets. BLT Architects is the designer for Lincoln Square.

If the timeline moves forward as anticipated, Alterra and MIS Capital hope to start construction in March 2017 and complete the project within 20 months.